I touched on the idea of families on the edge, of poverty, security, certainty, anxiety, in my squeezed middle post. I want to explore that idea, of the edge, a bit more here, to think about the ways in which neoliberalism, in general, and austerity, in particular, are associated with experiences of being on the brink, and what it might feel like to be on the brink.

Of course, these are ideas long associated with neoliberalism. Pierre Bourdieu‘s 1998 discussion of the violence of neoliberalism sees the ‘absolute reign of flexibility’ create an environment of competition and individualisation: “the struggle of all against all … through everyone clinging to their job … under conditions of insecurity, suffering and stress”. For Bourdieu, the structural violence of unemployment and the ‘menace’ of job insecurity puts workers on edge.

More recently, Guy Standing has drawn our attention to the precariat, the ‘new dangerous class’, “a multitude of insecure peole, living bits-and-pieces lives, in and out of short-term jobs, without a narrative of occupational development”. A particularly pernicious and increasingly widespread form of precarity is the zero-hours contract, which forces workers (in major public sector organisations, such as the NHS, as well as large corporations) into a liminal, ‘twilight zone’, ‘on standby’, neither fully in nor fully out of the labour market, with little control over their time or their income. It’s easy to see how that loss of any sense of certainty, or predictability, might be associated with anxiety.

The idea of precarity echoes strongly the idea of an edge, and a danger of falling. As Standing himself suggests “Many people outside the precariat feel they could fall into it at any time.” 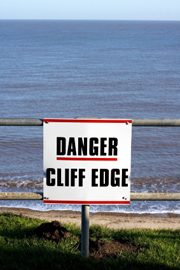 One of the markers of this period of recession and austerity, then, is the extension of precarity and vulnerability to ever larger parts of the population. What was, until recently, an experience associated with more marginal forms of employment, in informal economies, is now part of the mainstream, an everyday threat. More and more workers – and their families – have been brought to the edge. Media analyses, blog posts and think tank reports are full, day after day, of stories of workers in good jobs, with stable track records of employment, suddenly falling into uncertainty as they face job loss and redundancy.

But perhaps the metaphor of a cliff edge is wrong. Perhaps it’s more like a shoreline, with the edge of the labour market moving backwards and forwards through working populations, leaving people sometimes in, sometimes out. Despite myths of ‘benefit dependency’, most Jobseekers Allowance claims are very short, with many claiming for less than six months. But this in itself is troubling; life is unpredictable and unreliable. The precariousness of life under neoliberalism rests, then, to a considerable extent on the insecurity of employment, the in and out, the threat of redundancy, and the loss of the possibility of continuity.

But this is also coupled with what Rachael Peltz identified as “the absence of a containing governing authority” or what Lauren Berlant has described as a declining “infrastructure for holding the public as a public”. The erosion of welfare provision and the loss of other ‘containing’ institutions, such as unions and certain kinds of community, reinforce the sense of insecurity. The idea of social security and of the ‘safety net’ clearly assert the connection between these institutions and a sense of being contained, or held, of not being allowed to fall (off the edge).

In the context of current period of austerity, not only is welfare provision eroded still further, but the threat of further erosions and a growing sense that any benefit income is itself uncertain, subject to repeated reassessment and ever-changing criteria, provoke still more anxiety.

What is more, neoliberalism also promotes ideas of independence and self-sufficiency. It fosters an ambivalence towards, or even a wholesale rejection of, interdependency (as Judith Butler has explored). Neoliberal subjects should be self-contained, relying only on themselves to achieve success. Of course, this means, following Valerie Walkerdine, that any failure is also ‘achieved’ individually.

As I discussed in an earlier post, the sense of being contained enables us, hopefully, to go on being. In conditions of precarity, that sense is threatened; “trust in the continuity of life” (to quote Lauren Berlant) is replaced by new forms of subjectivity, insecurely balanced on experiences of vulnerability and individualisation. The loss of a secure environment of interdependency makes it difficult to ‘go on being’, to feel a sense of ontological security, as well as a sense of material or financial security. As Adam Phillips suggests, without a sense of containment, living becomes reactive, coping replaces living. Donald Winnicott explains how ruptures and breaks in the ‘holding’ or ‘facilitating’ environment, and the threat of them, erodes the possibility of going on being; when life becomes a struggle against the environment, when the environment impinges on life, then there is a psychic cost.

Although Winnicott was working in the field of child development, and talking of the welfare of infants, it is possible to think about these ideas in a broader context of welfare. Debates about the ‘psychical effects of social injustice’ (Frost and Hoggett 2008, 442) have enriched our discussions since Bourdieu drew our attention to ‘social suffering’ and since Richard Sennett spoke of the ‘hidden injuries of class’. In this project, what I’m trying to explore further is what this sense of being ‘on the edge’ feels like for families today and, importantly, to ask who (or what) contains these families in the context of austerity.