While it’s commonly assumed that the experts who work in museums and universities know absolutely everything, this (unfortunately!) is not always the case.  While researching some of the objects that we want to profile in the Cutting Edge project, a few have had our prehistory team stumped.  Some discussion has focussed on an object’s identification (is it a knife or a sickle?) but occasionally a debate has broken out over an object’s provenance.  The provenance of an object is important as this tells us where an object was found and so provides vital context.

The background of one particular object however has generated some serious debate….. 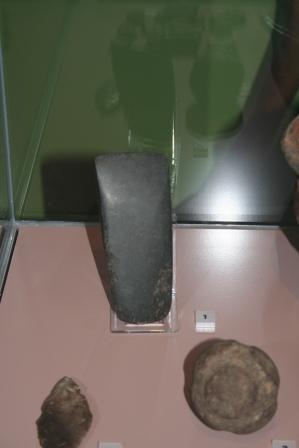 This is a stone axehead, and it’s currently on display in the Great North Museum: Hancock, in the “Ice Age to Iron Age” gallery.  As far as we know, it was found in Gateshead.  According to the person who donated the object, it was discovered during the early 1970s.  As the story goes, it transpires that a factory workman unearthed it while digging a pit in preparation for concrete foundations to be laid in order to install heavy machinery.  The axehead was found at a depth of about 3 metres…very near a human skull.

Whatever happened to the human remains is another tale completely.  The axehead eventually found its way into our collections thanks to a generous donor, and that should have been the end of the story.

By the mid 1990s after some examinations, theories began to emerge that the axehead may have had its origins not in Gateshead, but in Polynesia!  This speculation has garnered serious debate, and an article on the subject was written by J. Pollard in 1998 for Archaeologia Aeliana*, the journal of the Society of Antiquaries of Newcastle upon Tyne (SANT).

The puzzle of how a Polynesian axe could be found in the northeast of England as part of a presumed prehistoric burial site can not be solved by this blogger!  However, it is fervently hoped that with the creation of the Cutting Edge project other interested enthusiasts both professional and amateur may be able to shed light on mysteries such as these.