In this post, Fenham Ward Councillor Marion Talbot reflects on her experience of working with the University and other partners to develop and build a Pocket Park in the heart of her ward.

The Pocket Park came about almost by accident!

Fenham ward, in the west end of Newcastle, had received some funding for a DIY Streets Project to involve local people in improving their streets and making the environment people, rather than car, focused.

The project was coordinated by Sustrans, working closely with Newcastle University’s Architecture, Planning and Landscape Department.

As ward councillors we were able to build relationships with lecturers from the School, particularly Armelle Tardiveau and Daniel Mallo, which gave us access to expertise, skills, knowledge and a degree of challenge, which was such an advantage and pretty unusual.  To be honest I didn’t know that academics got stuck in and got their hands dirty. Literally in this case!

Our joint discussions helped shape the consultation for the DIY Streets and ensured that residents played a significant role in the final design.

Many residents had commented that the library, swimming pool and doctors’ surgery on Fenham Hall Drive formed a community hub, but that there was nowhere to sit, wait for their kids, or just generally hang about. The temporary intervention, designed, built and installed by Armelle, Daniel and their students, proved very successful. It showed, better than a map or diagram could ever do, the way in which people could change their environment for the better.

There was not enough money to change the temporary to permanent, but we had a sense of what could be done if we could identify more funding.

Then DCLG announced funding for Pocket Parks and, in a fit of enthusiasm, we applied.

The timescale was very challenging.  We had to produce plans, check land ownership, agree a steering group, design the park, source and cost materials and plants, find a project manager, build the park, produce and deliver a communication plan, all the while remaining calm and reassuring DCLG and local residents that we could deliver.

It was fraught and the budget was tight but we had planned for contingencies, the project manager was brilliant and the park opened on time on May 21st. It looks like an oasis in a sea of concrete and is really popular. 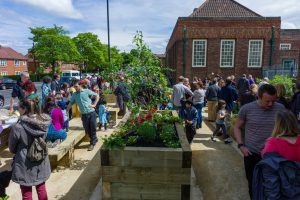 This Pocket Park not have happened without the relationships we had already built up over the 18 months we had spent working together on the DIY Streets Project. Those relationships built trust, joint commitment and a better understanding of what we were trying to do.

Ian, Karen and I, as councillors, really appreciated the practical implementation of the theoretical and had seen how that had already worked so well.

We could not have delivered this without the skills the University contributed.