The campaign to save the South Bank undercroft revealed important insights into what makes places valuable, and why that value is often so difficult to recognise and legitimise. The recognition offered by winning the AHRC’s Best Research Film of 2016 award will help us explain these insights to a wider audience and champion the value of social and environmental campaigning. 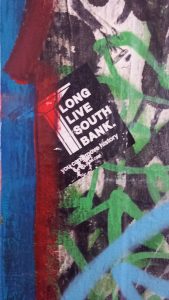 Today’s system of heritage conservation has its roots in a reverence of the past and its most majestic and well preserved remains. However it has evolved to recognise that our towns and cities have an in-built bias towards offering up the most durable heritage, which is often that of the rich and powerful. Twentieth Century bids to popularise and democratise heritage reacted to this by expanding and pluralising what counts as heritage, but left us questioning the basis on which we recognise and care for the past. The notion that heritage is not just given to us but actively created through our choices about what to conserve opens up questions about

The dominant approach to conservation planning rests on two assertions which, at first sight, appear self-evident but which, once we have broadened our thinking about how we relate to the past, can be seen to bias particular aspects of that relationship.

The first assertion is that some places are better than others. Some feel cold, windswept, empty, artificial or derelict while others invoke warm feelings of history, intrigue, social connotation or awe. This statement seems hard to disagree with; the next one takes it further. Because of the value stored up in good places, these places deserve to be protected from wholescale redevelopment or insensitive alteration. Places can be put in a hierarchy, with better places subjected to ever stronger legislative protection.

These two assertions may seem simple, even self-evidently right, but hidden with them is a battle for the management of the built environment. The idea that some places should receive privileged treatment depends on public interest justifications that appeal to the aggregated desires of today’s and the future’s public. If some places really are better than others then we need to understand why, collectively, we believe this to be the case. The use of precise and technical terms to define the valued characteristics of place has been associated with a concern for distributional fairness. Comparing places against fixed criteria, or universally agreed principles, can help to justify why certain places are privileged and help make decisions appear less subjective or less spurious. Such principles or criteria provide an immediate way of making sense of the built environment, one that offers the promise of advance judgement and with it the potential to support long-term plan-making. The use of criteria within a public interest framing seeks to provide transparency and accountability to political judgements about which places are better. Where policy makers have sought to move beyond fixed criteria, by instead asking what the significance of a place is, there has been a tendency to think about significance in line with established framings and practices and to underplay the importance of conflict in revealing significance.

Attempts to use the public interest to support the management of the historic environment can come unstuck at the point of contact with people’s direct experience of place. Such experience does not always fit easily into universal categories or predefined assumptions. It is infused with things that are not driven by a concern to differentiate one place from another: human behaviour, politics, cultural norms, imagination, emotional connection all go on within places and affect how people relate to them. Very often these phenomena occur in, and bring together, multiple places and times. For different people with different experiences, place might be central or peripheral to other concerns. Battles might be over places, or they might be larger battles which go on within or are caught up with places. Ironically, the depoliticisation and technicalisation of places that tends to follow the use of public interest based framings can have the effect of excluding the very social, political and community orientated dimensions that make places valuable. 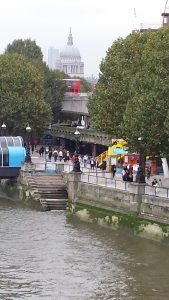 In February 2014 a group of researchers with backgrounds in media studies, heritage and town planning came together at a research sandpit and began to think through these issues. How could unorthodox, marginal voices be heard by those involved in the heritage system? We found relatively little research into the views of young people on heritage, and noted that the research which existed tended to assume a common definition of heritage. Joining up with film makers BrazenBunch, and the Long Live South Bank campaign, we set out to explore how skateboarders, BMX’ers, musicians and graffiti artists made use of the undercroft space beneath London’s Queen Elizabeth Hall and what it could tell policy makers about the meaning of place. By producing a short documentary and holding a workshop, we then sought to legitimise and convey understandings of place that are too often side lined. 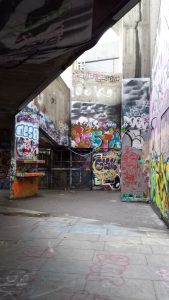 Our film You Can’t Move History is the product of our collaboration. It describes the connections between young people and place, and together with the project report, it explains how these meanings differed from conventional ways of understanding the place which centred on its architectural history and role within the Thames riverscape. Quotes such as “the space is also within the people” revealed the integral nature of humans in making and reproducing the value of heritage and places. Links made by participants to wider processes of gentrification highlighted the inevitably political nature of the campaign and references to the sound of the space and its emotional role as ‘home’ or ‘the vortex’ emphasised its central importance within a culture that emerged from street skating.

While the battle about how best to manage our historic environment is unlikely to go away any time soon, we hope these insights will spark people to reflect on what makes places valuable and on the importance of community, politics and attachment to our lives. The question of authenticity will remain central to ongoing debates about how to support these values on the Southbank.

You can watch the film via our website www.youthandheritage.com which also provides a guide to the project, an archive of campaign-related materials and the interim report Engaging Youth in Cultural Heritage: Time, Place and Communication.

David Webb is Lecturer in Town Planning and Director of Engagement in the School.
david.webb@ncl.ac.uk