The Bigg Market Consultancy Project is work which has been undertaken by Newcastle University Master of Planning students in collaboration with NE1. The project provides in-depth research and analysis into various aspects of the Bigg Market, focusing on topics such as media influence, the built environment and the opinions of visitors.

Key contacts for the project are Loes Veldpaus, Research Associate in the School, and Gareth Neill, Bigg Market Project Manager at NE1.

In this post, the project investigates the disconnect between the night and daytime economies of the Bigg Market and the resulting impacts on the public realm.

The Disconnect: Night and Day Usage

A sense of place derives from the way in which a place functions. The area is home to numerous different uses but remains divided. There is a clear disconnect between the night and daytime economies which has lead to the formation of a hotch-potch use of space.

The daytime economy of retail, cafes and restaurants are mixed side-to-side among the evening economy of bars, pubs and takeaway food outlets. As a result, the public realm is suffering badly.

Before we commenced this project, we had all passed through the Bigg Market during the day. None of us had stopped to visit the shops and restaurants or taken stock of the built environment. Because of this lack of connection, we began this project with an open mind. What we observed was an area with limited attractions or staying power. To us it is merely a place to pass through. Throughout the day the area consists of unopened bars and takeaway shops that look rundown, large amounts of buildings to let are particularly noticeable. On our first visit to conduct the questionnaires, it was a sunny mild day as seen in the pictures below. 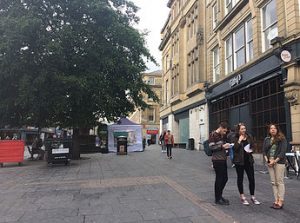 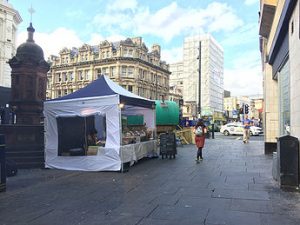 We noticed people stopped to eat their lunch on the broken benches and some used the Kafeneon restaurant, but only in limited numbers. We concluded from the first visit that we did not value the space as social meeting point in the day. The area lacks an anchor to attract people, meaning low footfall and suffers from a poor unkempt urban realm. We also visited at 9am, the space remained devoid of people but extremely busy with servicing and deliveries

As students, we use this space socially on an evening. We have all been to High Bridge Street and Pudding Chare for meals or drinks but only use the Bigg Market as a final destination the end of the night. The image below shows how the public space is well used and provides both a meeting point and an area to catch a taxi. This project made us more observant when out in the evening to see what type of people used the space at night and how they used it.

During the evening the shops and restaurants were hard to see next to the bright lights of the takeaway shops, bars and taxis. The area is mistreated with litter and people failing to care about the urban realm. The aftermath of the night-time economy is felt by people who pass through the area the next morning, creating an unwelcoming and dirty environment.

From our own observations we noticed the disconnect in Bigg Market from day to night. In our opinion, the day shows the area as a tired space that is underutilised and not recognised as people pass through. We believe that despite the negative reputation the Bigg Market receives due to its night-time events, it is actually the day time that is the biggest hindrance to its overall offer. Whether it caters to your tastes or not, during the night Bigg Market comes alive with people socialising, providing the area with a buzz. This cannot be said about the day usage, which is mostly typified by its tired urban realm, its poor retail and restaurant offer.

Would visitor numbers increase if the daytime retail/restaurant offer was improved, or would the night-time economy remain a barrier to attracting visitors?

To find out more about the project please contact Dr Loes Veldpaus: loes.veldpaus@ncl.ac.uk.