What do we mean by life? Is life a material that we can shape? What are the limits of life? How do our definitions of life shape our understanding of culture and society? How does our connection to life as material relate to our use of technology?

In LIFE week, we explore the physical material of life itself, our connection with it and the ways in which artists and scientists relate to life as material. LIFE  I focuses on life as a growing, living material, from cell growth, division and formation of vital organs in Nipam Patel’s Squid Coming to Life to the use of life as material in the laboratory in WhiteFeather Hunter’s Asceptic Requiem and Louise Mackenzie’s Lively Material. LIFE  II draws on relations to the material substance of the earth, from a powerfully basic connection in HAEM, to a personal connection in A Child of It’s Time, and our geological relationship to material in Subatlantic. LIFE  III explores our material connections with technology from imaging the brain with PET scans in Matthew Pickering’s A Visualisation of Beta Amyloid Growth, through literal connections between bodily material and print in Vicky Smith’s Noisy Licking, Spitting and Dribbling to speculative connections, to future bodies not yet realised in Louise Hervé and Chloé Maillet’s Un Passage D’Eau.

Some films contain scenes of a medical, surgical or physical ­­nature*, or occasional strong language** that some viewers may find uncomfortable. Whilst there is no age specific content guidance, and viewing of all films is at the discretion of parents, we have deemed content suitable for age 12+ 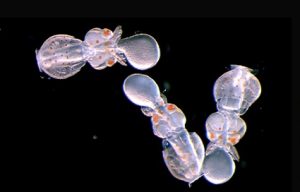 Produced by the evolutionary and developmental biologist Nipam Patel in his laboratory at the University of California, Berkeley, Squid: Coming to Life is a hypnotic film that follows the process of life from its most basic materials to complex living organisms, in this case squid and cuttlefish. With music composed by Kirsten Dutton and entrancing microscopy footage, the short video shows the cephalopods transforming from embryos (developing in their egg capsules) to hatchlings that emerge with the resplendent, colour-shifting skin they use for communication and camouflage. 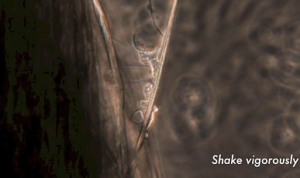 Aseptic Requiem presents a new scientific protocol for the compassionate disposal of live cells grown in the laboratory. The 24-hour time lapse of digital micrography shows repetitive looping of 11 compressed seconds of live NIH3T3 (human?) connective tissue cells successfully engaging with and performing vital functions on silk filaments in a liquid media culture. Aseptic Requiem is presented with the accompaniment of Gabriel Fauré’s Requiem Op. 48. The time lapse sequence was produced in August 2014 with technical advice and assistance from Guy Ben-Ary at CELLCentral, School of Human Biology, University of Western Australia. WhiteFeather Hunter is a multiple award-winning Canadian artist and scholar, as well as an educator, arts administrator, curator and writer. She holds an MFA in Fibres and Material Practices from Concordia University (Montreal, Canada) and is currently a PhD researcher, Australian Government Commonwealth Scholar and University of Western Australia Postgraduate Scholar. This video was generated as part of research conducted during an artist residency at SymbioticA Centre for Excellence in Biological Arts. 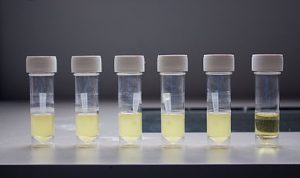 Lively Material is a video diary of artist Louise Mackenzie’s research within the Institute of Genetic Medicine at Newcastle University. The film follows a thought from the mind of the artist into the body of a genetically modified organism, the laboratory workhorse: E. coli. The thought is translated from a spoken phrase, voiced by the artist, into a code that becomes represented as physical material: synthetic DNA, stored within the body of a living organism. The lively material of the organism becomes both container and commodity in the context of the laboratory, used to store and generate DNA. Through a diary-based narrative, Mackenzie explores how her relationship to this lively material alters when DNA is stored within the organism in a cultural, rather than scientific context. 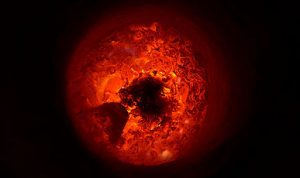 Bridging the fields of art, life sciences and metallurgy, HAEM explores fundamental connections between the elements of the earth and the human body. Jonsson’s film, usually shown as part of a multimedia art installation, focuses on the transformational process of deriving iron from an unexpected source – the human placenta. Through a complex labyrinth of blood vessels, the placenta provides a direct connection between a mother and a developing child. Iron, plentiful throughout this process of exchange, plays an essential role, moving through this labyrinth, guiding oxygen from the mother to the foetus. To symbolise this directed movement Jonsson chose to make a compass needle with iron derived from the blood contained in discarded, postpartum human placentas. This object concentrates the labour of dozens of births, of thousands of hours of fluid exchange, at the earliest meeting point between new and existing life. The film project was commissioned by Bio Art & Design Awards 2016, with the support of ZonMw, The Netherlands Cancer Institute, The Arts Council Norway and Bergen Municipality. 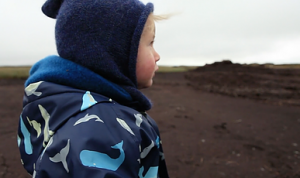 In Laura Harrington’s short film, our inherent and intuitively playful relationship with the materials of the earth are explored. A Child of It’s Time positions Moss Flats, a bare peat flat in the North Pennines as an exploratory playground for Harrington’s fifteen-month-old son to investigate, framing a natural and sensory response to environment.  A. In contrast to scientific processes of monitoring and observing, Harrington makes a claim for a spontaneous relationship with nature. Rather than passive or inactive, this relationship is in a constant state of flux. 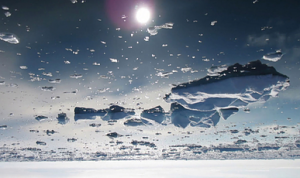 Subatlantic explores our connection to the material properties of life on a geological scale. Biemann’s film unfolds across the Subatlantic, the latest phase of the present geological period, the Holocene that began around 2,500 years ago and has registered major civilizational changes. The voiceover alludes to a she-scientist who is making instrumental observations about a changing environment around glacial melts. From an increasingly submerged place of oceanic observation, her objects of examination are as much the physical world and the atmosphere that is engulfing her as the thoughts that are formed, reconfigured or released under the changing conditions. Subatlantic also refers to the submerged space of the Atlantic Ocean. Set in the Shetland Islands, Greenland’s Disco Bay and a tiny Caribbean Island, the video implicates far apart locations that are connected through ocean streams. 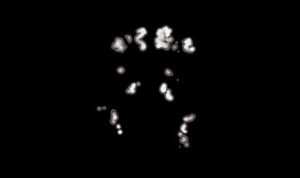 Originally shown as a floor-based projection, this short film was developed through studies of PET scans that show the growth of the beta amyloid protein in the brain, a protein strongly connected with the progression of Alzheimer’s disease. The work explores the physicality of Alzheimer’s using the visual language of bacterial growth and drawing on the psychological impact of interior growths. Both beautiful and sinister, the meaning slowly reveals itself as the animation progresses. A Visualisation of Beta Amyloid Growth, Cortical Slice is supported using public funding by the National Lottery through Arts Council England. 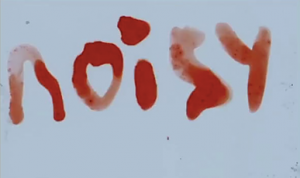 Vicky Smith’s animation combines 16mm film and bodily fluids, making our material relationship with technology apparent. Made with the mouth alone, Noisy, Licking, Dribbling and Spitting is a direct animation that takes the idea of licking as a primary and semi-automatic action. Using the stained tongue as a tool and stamping pad, the first impression is made 40 frames (1 foot) into the film and then reduced by one frame with each new stamp, accelerating until the marks overlap. Mechanistic control is then rejected in favour of spitting and dribbling as random action. Painterly like splats and swirls roll down the filmstrip and spill across into the audio track, generating noisy rasps and skidding sounds. 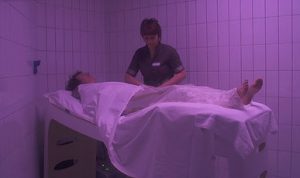 Un Passage D’Eau speculates on our water-based interactions with the material of life. The film takes place in a sea resort on the Atlantic coast in France. A group of subaquatic archaeologists are looking for the remains of ancient shipwrecks and try to preserve what they find from corrosion. A spa proposes rejuvenation to its clients with the help of seawater treatments. Meanwhile, a mysterious group of retired people are set on finding the way to eternal life.