The Future of Civic Culture in the UK? Conference Review 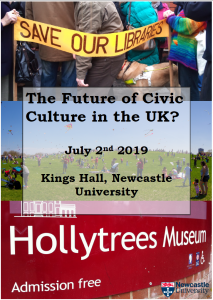 The Future of Civic Culture in the UK? is a project that brings together colleagues in the Department of Media, Culture, Heritage at Newcastle University and staff at the Tyne & Wear Archives & Museums. It explores the impact of austerity on cultural organisations with a civic purpose.

But what is meant by ‘Civic Culture’ or ‘civic purpose’? Are these terms merely another way in which to talk about public services and infrastructure? Or, does the ‘civic’ connote a set of values, embodied in buildings, spaces and provision? Do organisations have a shared understanding of what constitutes a ‘civic purpose’?

The conference at Newcastle University did not seek to definitively these questions, but to reflect on them. The conference included several responses from speakers from a variety of museums and galleries, libraries, parks and leisure contexts. Each reflected on their experience and insight concerning the austerity measures that have been particularly acute since 2010.

This post will summarise some of the key talking points from the speakers and the attendees. Some of the overarching concerns and observations included:

Sounds like #CivicfutureUK well worth a follow today. Have we forgotten the value of the public realm or are we being denied it by short-termism and an obsession with growth? https://t.co/aLmbSF71P6

One clear theme was that different sectors have quite different experiences and concerns. Anna Barker and David Churchill (University of Leeds) and Rob Pearce (Parks Alliance) discussed the role of civic culture with public parks. They emphasised the fact that spaces such as parks have clear historical origins (a Victorian civic ideal) but are now on an entirely different historical trajectory. Reduced funding and the lack of statutory protection has impacted local access to green space. There are, however, means of ensuring public parks’ continued prevalence and access. HLF capital funding and initiatives such as the Improved Wellbeing through Urban Nature (IWUN) 2019 Principles for Policy Making.

Contrasts exist between the experiences of parks in recent years and other sectors. While there are overlapping concerns, responses can differ significantly. For example, Lindsay Findlay King (Northumbria University) discussed the current trends seen in leisure and sports facilities. They tend to have access fees, which is a sharp contrast to non-charging organisations. Users are often easier to identify as they may use facilities for a specific activity or be part of a sports club. Parks, on the other hand, may perform multiple functions to communities, some of which are not always visible.

The differences in experience between parks and leisure centres, or libraries, museums and galleries were quite varied. Some of these sectoral differences were linked to historical conventions for particular spaces and uses, whereas others were closely related to individual decisions and local contexts.

Another recurring point of discussion was the balance between paid staff and volunteers. There has been a marked change in the way many organisations are staffed; for example, there has been a 242% increase in volunteers working in libraries since 2008. Kerry Wilson (Liverpool John Moores University) highlighted HMP Norwich, which holds volunteer-run cognitive stimulation therapy, working with elderly prisoners who may have impaired memory and are excluded from other prison services. There are implications of this situation on professional ethics and care in cultural work.  The degree of emotional labour undertaken by staff and volunteers is often performed ‘successfully’ by those with the social, intellectual, cultural and material resources to do so.

Isobel Hunter (Libraries Connected) stated that volunteering could enhance a service, but it should not replace professional skills as this can weaken a service. There are good and bad volunteer models – so there needs to be a consideration as to what it can enhance and what it might limit. Chris Clarke (Community Managed Libraries Peer Support Network) and Gill Hart and Kathy Dunbar (New Cross Learning) offered insight into their experiences operating a community, volunteer-run organisation, albeit in quite different contexts. On the one hand, volunteer and community-run organisations may help to serve a more diverse range of interests and enjoy support from local authorities, but they can also provoke massive strain and individual responsibility for those who take on services that previously had the infrastructural support that local authority libraries might have access.

Rosie Lewis (Angelou Centre) echoed some of the observations made by the volunteers at New Cross Learning where volunteers in community spaces are required to perform a vast range of support services and are no longer considered librarians or custodians. From an organisational perspective, volunteers can help to alleviate financial pressures and provide long term savings. For example, Richard Saward (York Museums Trust) pointed to the benefit of volunteers, but like the other speakers, was careful to not present this a ‘silver bullet’, which echoed the observations of Iain Watson (English Civic Museums Network/Tyne and Wear Archives and Museums), who amongst other things, warned of the potential for pyrrhic victories when searching for savings.

Language of co-production, partnership & community-managed models massively problematic. Yes the 'model' 'works' insofar as it averts closure but there are people behind the model, working to deliver what service users still consider a public service for NO PAY #CivicFutureUK

The different organisational models highlighted by the various speakers is illustrative of the varied civic contexts discussed. Bethany Rex (Newcastle/University of the Arts London), suggested that the use of the civic is an attempt to redefine organisational identity in response to the threats of cuts and anti-public service rhetoric. The ‘civic’, is arguably less politically damaged than ‘public’, which gives it more considerable cache at this moment. The range of ‘civic’ minded organisations is vast, ranging from volunteer-run organisations to large city-wide trusts.

As mentioned before, Chris Clarke (Community Managed Libraries Peer Support Network) and Gill Hart and Kathy Dunbar (New Cross Learning) are examples of organisations that are highly dependent on the time of a small group or individual. While there are limitations to this, it can also offer an example of how local authority organisations or trusts might better engage residents and communities. Parks, libraries, museums and leisure facilities enter into the care of community groups through asset transfers, but the nature of this can differ vastly, and as a result, the characteristic features are outnumbered by their differences.

Local authority-run spaces are a vital element of this discussion, and they represent how individual organisations provide a service and deliver objectives that respond to broader social and political contexts. Tony Durcan (Newcastle City Council) described how this could play out and used his professional experiences to illustrate how decision making in times of austerity ultimately must protect statutory services first and then find ways to safeguard others. LA organisations can vary greatly depending on local contexts and what may be right for Newcastle, may not be mirrored in other urban areas or rural communities. Some organisations such as Tyne & Wear Archives & Museums may operate across several local authorities and therefore is more responsive to broader regional contexts as well as local ones.

Trusts are another organisational model that is prevalent in the current civic landscape. Duncan Dornan (Glasgow Life), Richard Saward (York Museums Trust) offered examples of how these large organisations operate in service of a local authority’s needs but still working independently. Trusts can serve a variety of sites, covering a range of interests in this way they can require a range of professional backgrounds. Trusts can operate in a variety of forms but typically do not own any of the buildings they serve in and pursue a greater range of commercial opportunities.

Some organisations and networks work across these different structures as well as supporting those who are underrepresented by them. For example, The Angelou Centre also assists individuals in establishing work and immigration status. Lewis observed that there are significant communities and parts of communities excluded from accessing public services and therefore omitted from any debate on what the civic is and what it can support.

Really feeling for some of the speakers at #civicfutureUK today, facing massive cuts, broken relationships, falling capacity – running out of time, budgets and places to go for civic culture in the city. Looking desperately for wins wherever they can find them

Inequality was a concern for all of the speakers at the conference. Rosie Lewis stated that there is still a chronic underrepresentation of BME workers and professionals in roles in statutory services and this means that these services can often lack the cultural understanding or nuance to respond to a variety of requirements. Inequality and overarching issues such as austerity widen the gap between decision-makers and activity ‘on the ground’. There was a consensus that austerity exacerbates and widens existing inequality, and it becomes increasingly difficult to make long term plans that reverse this trend.

Speakers observed that social and economic backgrounds could have a significant impact on how civic spaces are accessed. For example, a quarter of people living in urban areas report that they spend time outdoors in natural places less than once a month. Infrequent visitors are more likely to be: older, from DE social classes, not working nor in education, and come from black and Asian backgrounds. To ‘level the playing field’ in favour of communities in most need, multi-sectoral efforts (including urban planners, public health professionals, community organisations and local businesses) are needed to co-produce and implement interventions to overcome structural, social and personal barriers to use.

Another critical issue that Bethany Rex identified was that the Civic is more than ‘active engagement’: it is the quality and variety of engagement. This point brought into sharp focus the fact that there are still many groups who are underrepresented in both cultural work and access to cultural infrastructure. Inequality is a fundamental and irrefutable obstacle to realising a contemporary civic culture.

Lewis reiterates that we need to be thinking intersectionally when we’re talking about diversity and difference in relation to civic culture. Who are the most marginalised and are our services reaching them? #civicfutureUK

What next & Final Thoughts?

Some of the key takeaways from the day came through in the closing Q&A with the day’s speakers and the discussion via the Twitter hashtag #CivicFutureUK. These responses show the similarities and differences between the sectoral reactions to the day’s key questions.

“Grassroots organisations can build a connection between major institutions.”

“There is a tendency to see working with communities and generating money as different endeavours.”

“There is a risk of volunteer-run services folding and not being replaced.”

“What about digital civics? How does this impact the notion of place when compared to the pre-digital age?”

“What is the creative vision for the future? It is not just a bureaucratic process.”

“Should we seek a bottom-up culture rather than a civic culture?”

“Co-operative models and collective run organisations are the future.”

“Fewer stable employment options nullify the notion of the future – this undermines the concept of civic culture.”