Today at Newcastle University with the charity Fifth Sense for people with smell and taste disorders, we held a patient information day. It was an insight into the challenge of living with the loss of the aroma of food, and the lack of understanding and support for those that do. As Stephen Ball, consultant ENT, suggested, if you turn up to a health professional with a loss of eyesight, or can’t hear, something happens. If you turn up because you can’t smell anything you’ll be lucky if you get a referral and very lucky if they take it seriously – it just doesn’t get talked about. But loss of the sense of smell, or changes to the sense of smell, can have manifold consequences for daily living. It’s no fun eating when you can’t taste the food, and even worse if you experience parosmia when you can’t identify the smell, or even worse if everything smells bad. We heard many stories from those present -Joanne talked about the experience of a bad cold that led to parosmia – everything smelled of burning rotting flesh. She didn’t want to eat, to see anyone, and she became a recluse until she discovered some drug options that could suppress the bad smells and she could eat again – though bitter tastes are still a problem for her. Another guest talked about the head injury they’d had and how without smell, it washed the colour of living away.

The altered eating group and Chef Sam prepared a lunch for the 30 or so people present, made up of dishes inspired by Asian spices and interesting textures. The lunch went down a treat. I introduced the wonderful insights from another chef – Fuchsia Dunlop. Fuchsia changed the way I think about the texture of food and how in Chinese cuisine, texture is as important an element of what they enjoy as ‘taste’ is. She has a great video on how to enjoy eating sea cucumber – its a good lesson in thinking about food differently. 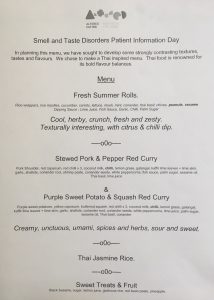 Overall, we came to understand more about the social and emotional consequences and challenges of living with altered eating issues, and the need for more research, more understanding, more support for those that do. We also understood that there are ways of coping that rarely get talked about. We also appreciated that just by gathering together around food and talking about it, there is a sense that you are not alone with these troubles. Altered eating is not unique by any means, we need more events like this to share the experience… 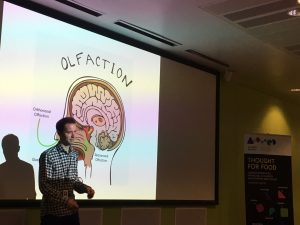 Translational research is a ‘buzz’ in academic research in health. So often, research gets done but goes nowhere, or gets nowhere for a long time. The process of writing for academic journals takes time, and even when the research is ‘out there’ in the public domain it can take years before it is noticed and acted upon, if it is at all. Translational research is interested in how to make the process smoother, how to get research done that is useful and useable and gets into practice quicker.

But in the opposite direction, I have been wondering how much research IS translated into practice that fails to get noticed in academic circles. For example, many researchers ‘apply’ their insights from research in other ways – by sitting on public forum, by contributing to debates in the press, by setting up projects that are not ‘directly’  counted as University work. Particularly for social sciences, the practical use and translation of research findings (and of practice into research findings)  may not get the recognition that for example, spin off companies in the sciences do. We don’t always ‘spin off’ research for economic gain or kudos. We don’t always document how practice informs research – how we ‘swop a lot’ between the two.

This applies to a variety of activities I’ve been involved with over the years in my local community. For example, I am not the only academic I know that’s been involved setting up a community garden and I know that my research has certainly precipitated my involvement in relation to it, has benefited my research, and has informed my approach when I was chair of the group from 2010-2017. The Dilston Physic Garden in Corbridge in the Tyne Valley has done well at promoting its University linkages – through interactions with Northeast Universities Medicinal Plant Research Group (MPRG), educational visits from North East university medical students, groups from other university departments. I wonder how much it’s formation is considered by the university as an ‘output’ and valued as ‘impact; and it’s lovely demonstration of ‘translational research’ in so many ways. As noted on the website:  “the physic garden has its origins in neuroscience.  It was created and is curated by a professor of Neurochemistry at the University of Newcastle and is directed by a PhD in pharmacognosy (the science of medicinal plants) specialising in aromatic plants for the brain.  Dilston’s main focus is what plants can do for our brain and mind.  It is grounded in modern herbal medicine and 21st century science and embraces sound evidence from a multidisciplinary and trans boundary perspective”.  It is a place that many people visit and improve their understanding and actions in relation to their health and well-being. In my view it is translational research in action.

Equally, the Station Master’s Community Wildlife Garden in Whitley Bay is and has been research led and translational in a variety of ways. It was established in 2012 on a site that had become a problem for metro operators because of on-going trouble with anti-social behaviour. The community came together with a positive solution to take over the site and turn it into a community run and led project that is now open to the public and used by many people for many different ‘health’ relevant activities. There are growing workshops, food demonstrations, events and activities that contribute much to social cohesion, community building and improving physical and mental health.  From the outset it had a research bent – several of the local community were expert researchers and set about conducting a detailed open-ended interview with each of the households opposite the site (26 of them). The results were analysed using qualitative research skills and the findings summarised and presented. The ‘iterative’ process of research and member(community) checking that followed resulted in the development of a collective view on what a development on the site might look like, who it would be for and what the fundamental goals of the garden should be. The garden is testament to that process.

The development of the garden, and the now linked Green Beans Market that we hope will continue to support it financially, resulted from thinking about models of social enterprise that are bouncing around in the academic literature. From that we saw an opportunity to think differently – rather than the garden earning money to survive, we are keeping it as a non-economic space and letting the market (a not-for-profit social enterprise) do that financial work.

Activities at the garden are often informed by the latest health research, for example we’ve run  ‘sensory workshops’ based on new neurological insights into the importance of a fully flavoured experience to health and well-being. Plus, it may well have had impact at a policy level. The train company that supports us, Nexus, is using the market as a ‘test case’ for other social enterprises and community projects on the network. Community involvement with the garden, market and metro station have recently been highlighted in a national report by the Rail Delivery Group as one of 10  ‘stunning examples of how stations can be transformed into something that both the railway companies and the community can feel proud of’.  I can’t quite document where the impact is in health policy documents (yet), but I often get invited along to  present at council led health events in ways I’m sure would never have been open to me without both my academic and practical involvement as a ‘calling card’. 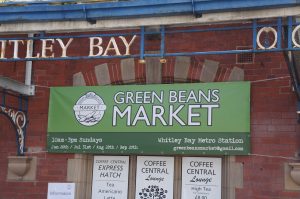 I am, in my paid work, involved in the Centre for Translational Research in Public Health – Fuse, a collaborative research network covering all five north east Universities. What ‘translational research’ means is different for different people within this group, and in other disciplines. The Translational  Research theme group in Fuse has a particular focus on evidence-informed practice and policy, and practice and policy informed research agendas in the health area. Over the years of working alongside this, I’ve become increasingly interested if we should talk more than ‘translational research’ and start to think also about ‘translational researchers’ and the kinds of roles they play. I suspect there are many ‘translational researchers’ working away, developing their ideas through research and applying them in practice (and the reverse) without really paying much attention to their impact outside the University setting, and without documenting them (mea culpa but I’m busy).

How many academics apply their research heads to real world problems in real world settings that don’t get taken up in the academic literature? How many ‘translational researchers’ are there out there doing amazing things?

Welcome to NCL Blog Service. This is your first post. Edit or delete it, then start blogging!