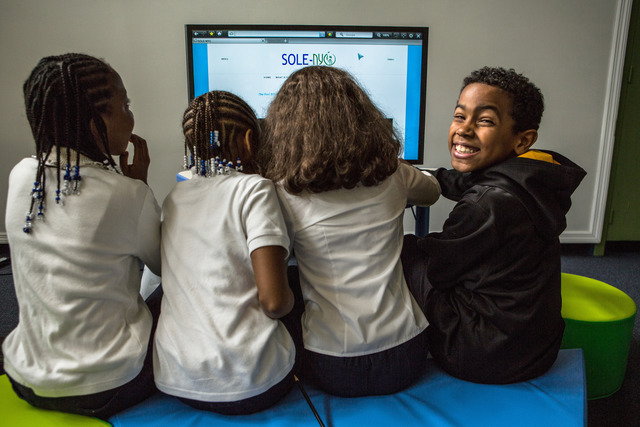 SOLE NYC in Harlem has got its work cut out. Simply introducing the concept of self organised learning is a challenge in most schools, but at John B. Russwurm PS 197M they will also be using it to engage particularly hard-to-reach students.

“I didn’t want to do this in a school where everyone was doing ok – I wanted to do it here because I knew it could make a real difference,” says Natalia Arrendondo, who is the driving force behind SOLE NYC and will be overseeing the research into reading comprehension, social skills and how young students navigate Big Questions.

Professor Sugata Mitra officially opened SOLE NYC today (14 October) as the first dedicated American SOLE research lab. It joins five other labs in India and two in the UK that have all been created as part of his 2013 TED Prize wish to build a School in the Cloud.

New York’s schools are the most segregated in the whole of the USA, with students divided not only by race, but also by socio-economic status. SOLE NYC is in a high poverty and low income area, where most families live on well under $25,000 a year.

Most of PS 197M’s students come from less well-off African American families, along with those from Hispanic and Asian backgrounds. “Some kids have difficult home lives,” explains Natalia. “This can have a knock-on effect on behavioural issues and make it difficult for them to engage in class.”

Natalia sees her role as SOLE lab co-ordinator as also part counsellor, trying to talk to the students to see what’s going on and offer a bit of stability in their lives.

This SOLE lab, which is being funded through Newcastle University’s SOLE Central, will cater from Pre K (three to four-year-olds) up to 5th grade (12-13-year-olds) and will be run by a committee made up of 3rd, 4th and 5th graders.

The design the students decided upon that best reflected their idea of ‘adventure’ for the SOLE lab was a jungle, complete with an animal mural with clouds, monkeys and butterflies hanging down from the ceiling.

The plan is for classrooms to cycle through the SOLE lab so that there is a session happening at all times (4+ sessions a day).

“I feel very lucky that everything has come together in such an amazing way,” says Natalia Arredondo, who is a PhD student at Newcastle University currently living in New York. “I’ve been bowled over by the help the school has provided – custodians, teachers, construction workers and parents have all come together to help, often after school hours. They’ve made it their own project. It’s often said that it takes a village to raise a child, but in Harlem it’s taken a village to build this SOLE lab.

“I’m confident about what will happen with the students but what I’m curious about is the teachers, as very few are into inquiry-based learning and it’s very much the opposite of traditional teaching.  “Whether the teachers embrace it or not is crucial and I think this is where the work will need to be done.”

Natalia has already carried out several SOLEs in the school to get the students used to the idea of working in this way and was surprised how quickly they took to it.

PS 197M is a focus school, meaning it has failed to pass state examinations several years running and so becomes the district’s focus, with more support and visits from the superintendent’s office as a result.

Natalia carried out a lot of research and demonstrated in all types of schools in the area before deciding to locate it in Harlem. “Natasha (Spann, the school principal) has a passion for education – she just loves it but is in a difficult spot,” Natalia says. “I wasn’t sure if she’d go for this, as it’s a gamble, but in the end I just put it to her, stepped back, and did as Sugata would, sitting back and just letting it happen.”