One year ago, the idea of going abroad to a Research Internship was just a wish. Now, I have had an experience working with Pam Woolner, at CfLaT in Newcastle University, that helped me grow as a person and researcher.

My first school visit while in Newcastle was to Churchill Community College, accompanied by Alan Strachan and later helped by Wayne Daley, who were keen to make sure I got all the information I needed for my study. The school was built in the 1960s and renovated about 12 years ago, and visiting it opened my eyes to what the British curriculum has to offer with all the department-division and subjects they have, including music and dance (which have their own space).

The second visit, to Whitburn Academy and its 6th Form building, rebuilt in 2009 and 2015 respectively, confirmed the first impression of education in the UK. Walking around the school along with the solicitous and attentive head teacher, Alan Hardie, and my mentor Pam Woolner, confirmed what I, deep down, already knew: the UK presents a different reality from Brazil, with its different relation regarding school facilities and maintenance and treatment regarding pupils and teaching staff. 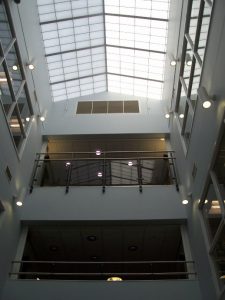 In my third visit, to Prudhoe High School (a 2016 building),alongside Pam Woolner, Ulrike Thomas and Karen Laing, the point was understand how CfLaT’s research methods are applied to staff and pupils, besides making a tour around the facilities. One more time, I was dazzled by the possibilities the school offers, with media studios, well-equipped art and science labs and the concern of trying to include the building in the community dynamics. 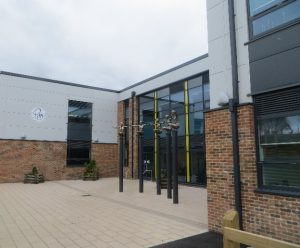 These schools are, in many respects, traditionally-designed ones, with their own reasons. Churchill more because of the time it was first built and then due to willingness to follow the former architectural style, Whitburn because of the former head teacher ideas and beliefs and Prudhoe due to the governmental programme under which it was built (PSBP). However, they do present, as my investigation pointed out, some innovations in terms of school Design Patterns, which are spread around the buildings – even if still shyly –, noticed and cherished by the users.
Therefore, going to the UK taught me a meaningful lesson that has changed my way of seeing things. Traditional facilities can be well-designed and they do have their value. “Updating” thoughts and attitudes to contemporary ones does not mean tearing down buildings when they do not have the new Design Patterns I advocate schools must have today. These changes and diversities can be added in smaller steps [as long as they really are added], as their importance is felt and their good impact on supporting different ways to teach and learn is noticed more and more.

My name is Larissa Negris, I’m Brazilian and I am an Architect and Urban Designer. Investigating School Architecture has been my passion only quite recently, since I am as yet a second-year Master student at UNICAMP, but has got stronger after broadening my views in the UK. I got a glimpse of what education and its infrastructure can be.