How can different organisations and communities work together to enact long-lasting change and shape their local environment for the better? Dr David Webb tells us more about his latest project enabled through a secondment funded by the ESRC IAA.

In October 2014, I bumped into another Wingrove resident, Laura Harrington, during an alley makeover workshop day hosted at Middlesbrough Environment City. The workshop showcased efforts by communities to turn back lanes and alleys into useable outdoor spaces for growing and socialising rather than left over spaces used for little other than waste management. Funding from the WEA Greening Wingrove project led to eight sessions during 2015/16 in which local residents volunteered, with assistance from the CHAT Trust, to take youth activities outdoors and broaden them beyond the trust’s usual 13 – 21 year old client group. 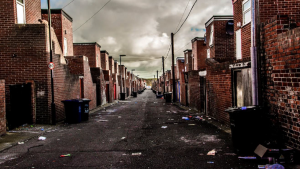 Following the conclusion of events in summer 2015 ESRC IAA funding paid for my four month, part-time secondment to the CHAT trust. I wanted to explore the potential of the work which had already taken place, both for achieving sustainable physical change to the lane’s environment and for informing the design of wider innovations in service delivery. The aim was, in part, to contribute to Newcastle City Council’s 2020 group agenda of finding cost savings while maintaining services and to promote Newcastle nationally as an innovator of progressive and democratic responses to the cuts.

The project began by focusing on young people engaged with CHAT, many of whom had been involved in providing music at the Reclaim the Lanes events. A result of this was an increased focus on the Slovakian community as these made up the majority of the local users of CHAT activities. There were pro-active efforts to build links with the adult residents on the street too, for example through door knocking and chance conversations. Home Housing offered free paint and materials and a private landlord provided a pressure sprayer to prepare the CHAT trust wall for repainting. Young people involved with CHAT took part in repainting the wall and some expressed an interest in graffiti, which led to the co-design and co-painting of a mural on the wall and on the side of the CHAT trust building. 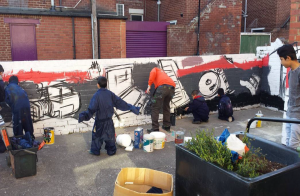 A positive consequence of these experiments was the effect of engaging with teenage young people on younger children and on parents. Primary school aged children were particularly enthusiastic about engaging in things they felt were benefiting the community, while parents were keen to observe and support their sons and daughters. As a result of this engagement some valuable information is now being collected about how people are used to dealing with waste, their misunderstandings of the expectations of systems in Newcastle and their views about how to improve these.

At a chance meeting back in February, one resident’s response to hearing about the project to reclaim the back lane in Wingrove was “yee’ve got neigh chance” but the progress made since then shows that direct environmental change may be slow, but it is possible and the momentum is growing.

A hallmark of the Reclaim the Lanes approach used in Wingrove is the engagement of people in the direct delivery of environmental change. This is significantly different from, for example, seeking to educate people about how to use waste collection services that have been designed by others and goes well beyond traditional consultation. 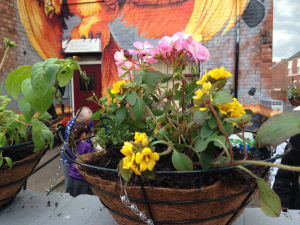 The project raises questions about how these various approaches might be applied in other areas of Newcastle and beyond and there is growing interest in how these active community-led interventions can be implemented. In January 2017 a workshop was held at Newcastle University with the different partners involved in the project to discuss these issues. The session was very well subscribed and around 85 people from local authorities, charities, community interest companies, Newcastle and Northumbria Universities, consultancies and arts organisations came to hear more and be inspired by the ongoing work at Wingrove. 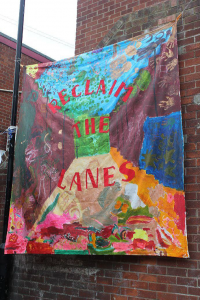 There are of course practical limits to the kind of interventions which can be delivered directly through community action but it is possible to channel community interest towards the redesign of services or the design of more permanent changes to the local environment. The Reclaim the Lanes work found that, where people could see participation leading to tangible differences, this encouraged further participation. We found that some of the biggest difficulties to achieving change arose from being unable to influence or adapt the systems used in the area. However, the reverse may also be true: if people begin to feel that they are genuinely able to have some influence this could be a powerful motivating factor capable of building community capacity.