An overview of iBUILD-supported studies on City Deals was presented by Dr Peter O’Brien, from the Centre for Urban and Regional Development Studies (CURDS), at a recent forum in Canberra, Australia, of federal, state and local politicians and officials convened by the Regional Australia Institut 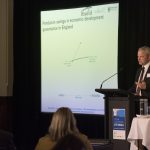 e. The Australian federal government has taken a close interest in the UK City Deal model and has begun, in conjunction with state and local government, to roll out similar initiatives in Queensland, Tasmania and New South Wales. Dr O’Brien was invited to share UK experiences to date and to lead a practitioner master-class ahead of a new programme of Australian City Deals being launched in 2017.