I have been mulling over George Monbiot’s recent announcement that he has become (almost) vegan in response to environmental impacts of animal agriculture. As a soil scientist concerned about maintaining soil quality and preventing soil degradation in the UK and overseas, I get a bit worried when people suggest we should exclude animals from our food production systems. We know that the best way to ensure healthy, productive arable soils is to rotate annual crops with longer term soil building grass/clover leys. Ideally, 25-30% of cropped land should be under a ley at any one time. It then makes sense to have some ruminants in the system to consume the forage produced by this soil-building phase. If we don’t do this, how can we incentivise farmers to leave land idle for so much time? And what about the need to maximize food production in response to growing world populations? Surely, well managed, mixed farming systems where animals are raised primarily on forages have a place in future sustainable food systems?

I started to read around the subject this week and came across this article by Peters et al. in the new journal Elementa, which investigates the carrying capacity of US agricultural land comparing ten different diets. They start their article by saying that one of the most perplexing questions in sustainability science is, “What should we eat?” (more or less how I ended my first blog!). It’s a fascinating study and well worth a read, but if you don’t have the time, some key points have been summarized in this short article. Their study focussed on the mainland US and included cropland (134 M ha or 31% of the total land available for food production) and permanent grazing land which is not suitable for cropping (299 M ha or 69% of the total). They assumed that at any one time about 70% of the total cropland was in cultivated crops (allowing about 30% to be in a soil-building grass ley as described above). The diets included a range of omnivorous options with different percentages of meat, ovolacto-vegetarian, lacto-vegetarian and vegan. While the vegan diet required less land to feed a person in a year, it also resulted in the lowest carrying capacity for the land because it essentially “wasted” the land that was in a soil-building ley and also didn’t use any of the permanent grassland.

It would be interesting to see a similar study conducted using the UK agricultural land base, but I suspect this would be further complicated by our reliance on imports, particularly of soya. The US has the luxury of a huge and diverse agricultural land base that can potentially feed their whole population – this made Peters et al’s study relatively simple. Our agricultural land base is only about 4% of what is available in the US, yet our population is almost a third of the US. So here we would have to consider scenarios with varying reliance on imports and consider the trade-offs among different dietary, environmental and ethical goals – lots of food for thought!

Hello and welcome to my first venture into the world of blogging. I am planning to use this site to share information on the research work that I do, links to projects I have been involved with, and also my comments and reactions to emerging issues in food security, soil science and agriculture.

The title of my blog reflects my passion for agriculture and addressing the challenge of how we feed ourselves in a world with finite resources and a growing population. My research expertise is based in the world of soil science, and I like nothing better than to get out in the field and get my hands dirty examining soils and their fascinating biology. A common thread throughout my career has been studying how to manage soils to maximize their health and productivity, using what might be called “organic” or “ecological” approaches. This includes using manures and composts for nutrient supply, diversifying crop rotations, and minimizing tillage. More recently I have come to recognize that these approaches are all part of a strategy that is known as “ecological intensification” – managing agricultural systems so that beneficial natural processes are optimized for delivery of ecosystem services, including food and fibre production, biodiversity, nutrient and water cycling and pest management. 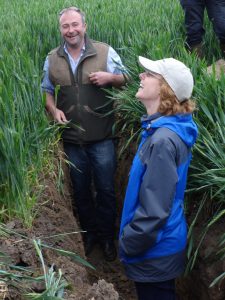 I have been around long enough to know that there is no magic bullet that will solve the challenge of providing healthy diets for all, while preserving the natural environment and protecting rural livelihoods and communities. This challenge is complex and will require solutions that emerge from multidisciplinary research with real stakeholder engagement. It’s a tough challenge and I know I don’t have all the answers, but I’m looking forward to engaging in discussions and conversations with many of you, sharing and learning together as we try to address this basic question: what is the best way to feed the world?