A team of scientists and engineers from Newcastle University (NU) and the National Oceanography Centre (NOC) are collaborating in a project funded by the Natural Environment Research Council (NERC) to measure sea level from a marine surface autonomous vehicle. Signals from both the US GPS and Russian GLONASS Global Navigation Satellite Systems (GNSS) are used to track the position of the vehicle and its elevation as it floats on the sea surface.

The vehicle is a robotic vessel manufactured by Liquid Robotics, Inc. called the Wave Glider®. The Wave Glider transforms wave motion into forward thrust, developing speeds of up to 2 knots, and uses solar energy to power onboard navigation equipment and measuring instruments. It is thus able to remain at sea for long periods of time, harvesting all the energy it needs from the environment. The vehicle is piloted remotely via satellite. 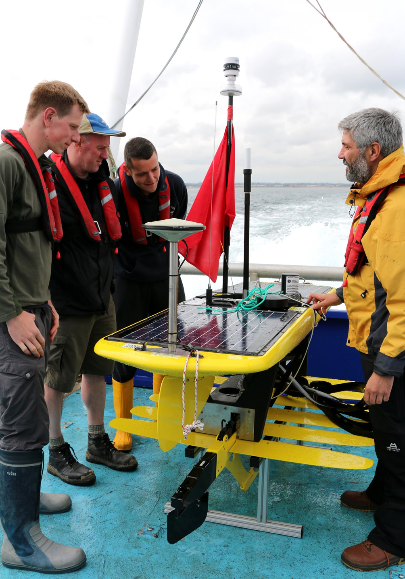 Newcastle University team inspecting the Wave Glider before deployment in the North Sea off Blyth. 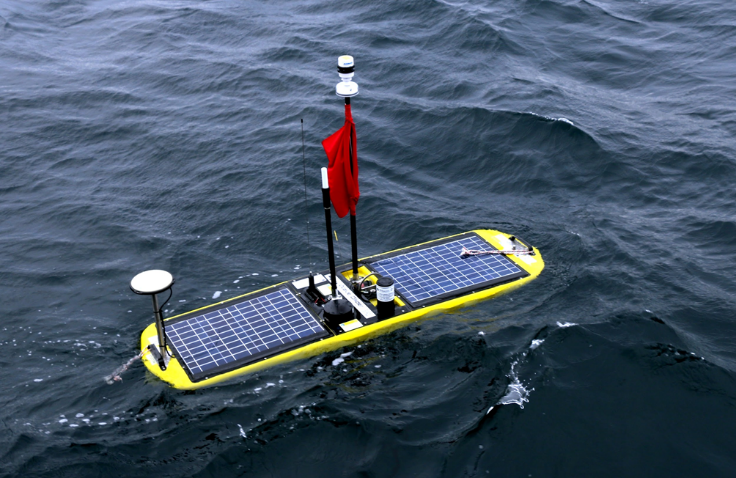 The Wave Glider freshly deployed to initiate a survey in the North Sea. The GNSS antenna is the flying saucer-shaped object mounted near the rear end of the vehicle.

For this project, a low power GNSS antenna-receiver system manufactured by Septentrio was installed on the Wave Glider. The device is capable of measuring sea surface elevation with respect to the centre of the Earth, 6371 km (3959 miles) below our feet, with an accuracy of about 3 cm (1 in).

The GNSS-Wave Glider was tested by NOC during a short trial deployment in Loch Ness in March 2013 but it was not until July 2016 that the system was deployed at sea for the first time. During this deployment, the GNSS-Wave Glider surveyed the sea surface elevation and obtained meteorological data in the western North Sea for two weeks between 28 July and 10 August 2016, travelling about 350 nautical miles (400 statute miles) in the process.

Data from this mission will be used, among other applications, to calibrate radar altimeters installed onboard several Earth orbiting satellites (Jason 2/3, Cryosat 2 and Altika) and improve their accuracy near the coast. 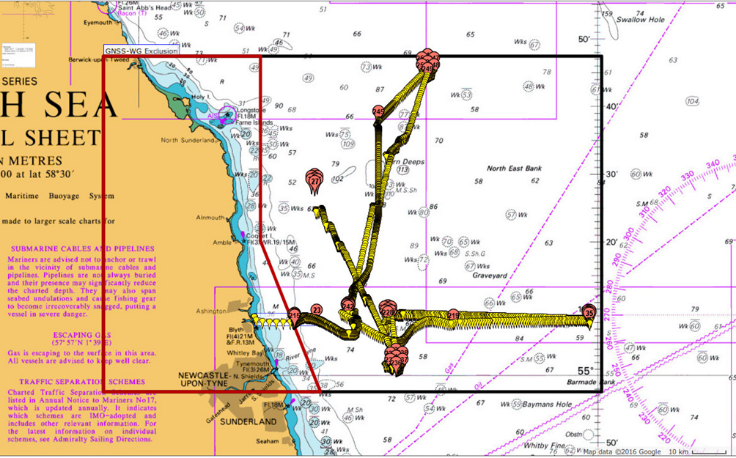 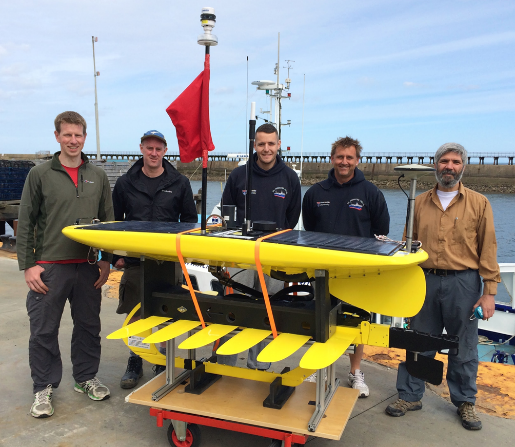 Acknowledgements. Our thanks to the captain and crew of the RV Princess Royal and the NOC and Newcastle University engineering groups that supported this effort. The software products POLPRED and anyTide were used to aid piloting of the vehicle. All photos courtesy of Sheree Ibbetson, Peter Foden, Nigel Penna and Miguel Morales Maqueda. Photos processed by Peter Foden.