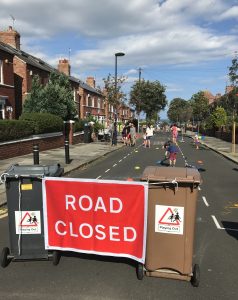 The recent debates about loneliness and, in particular, the launch of the government’s strategy to tackle loneliness have really animated me in recent weeks and months. More and more reports which explore the experience of loneliness for groups across society, including children and young people, are heartbreaking and angry-making in equal measure. With Sarah Hall, I have argued strongly for a much more political perspective on loneliness, which takes account of austerity and the uneven impacts and burdens of loneliness, but more substantively, I’m also trying to reflect on, understand and explore alternatives to some of the social shifts that have brought us to this place.

Others are better placed and have much more expertise to theorise loneliness. My focus is on thinking about how playing out – an international movement promoting temporary residential road closures to enable children to play and neighbours to meet, involving over 800 streets in nearly 80 UK local authorities – might create the space and atmosphere for connection and present a radical challenge to the erosion of social infrastructures and community spaces, broadly defined.

Academic literatures demonstrate that play itself and spending time outdoors are critical for the formation of a sense of belonging and for relationships to wider communities (Lester and Russell 2010, Gill 2007; Prisk and Cusworth 2018); and streets have long been identified as potential spaces of encounter (Hubbard and Lyon 2018). Recent research by Playing Out (2017) suggested that these benefits are evident on streets that play out. 91% of participants knew more people on their street as a result of playing out, and 84% felt they belonged more in their neighbourhood. In pilot research carried out with streets that play out in North Tyneside, particular forms of sociability that enabled emotional, social, and material flows between neighbours and facilitated a positive reinvigoration of relationships on streets were regularly identified (Stenning 2018).

Although the government’s strategy argues that “loneliness doesn’t discriminate”, there is considerable evidence (DDCMS 2018; What Works 2018) that particular populations are more at risk, such as those with disabilities, special needs, or poor physical or mental health (and their families), new parents, carers, and those who have recently moved home (especially if in the context of bereavement or separation). There is also considerable evidence of loneliness amongst children and young people (Action for Children 2017). These are also groups that have been particularly hard-hit by cuts to benefits and to statutory services, for whom access to spaces to meet and find support are likely to have diminished in the context of austerity (Stenning and Hall 2018). Yet, these are also groups which are likely to be well-represented on streets where neighbours play out.

My research around these themes is focused on two deeply interconnected projects.

The first, developed collaboratively with Playing Out, is centred on the desire to build an evidence base around playing out and loneliness and identify strategies to develop playing out in particular ways that might alleviate loneliness. This is funded by Newcastle University’s Social Justice Fund and will be based on pilot research in Bristol in the first half of 2019.

The second is a broader – as yet unfunded – project which asks how playing out shapes residents’ attachments, material and emotional, to their streets and the people on them and how play has the potential to challenge the erosion of relationships in everyday places. It is rooted in an idea of potential space, developed from the work of Donald Winnicott and defined as “an inviting and safe interpersonal field in which one can be spontaneously playful while at the same time connected to others” (Casement, 1985, 162). This part of the research seeks to think about how playing out might connect not only to the reported rise in loneliness, but also to longer-standing debates about austerity and neoliberalism and their impacts on communities and relationships. Through this, it connects to ideas about the loss of shared spaces of intergenerational encounter and community and of social infrastructures (Klinenberg 2018) and about a continuing decline in the quality of relationships in our everyday lives (Rustin 2013), including with our neighbours (The Young Foundation 2010).

Play on streets is about making connections, in all sorts of material and emotional ways, but it also offers me an opportunity to think about and make connections between lots of different literatures and ideas that excite me.