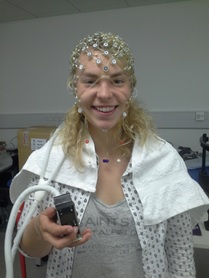 On June 21st I began a new venture, working at the Institute of Neuroscience helping the ASTEROID research team. My first day nerves were quickly tamed by Jenny, the Principal Investigator/ project research leader, who immediately offered me a coffee and sat me down for a chat.   As a well-known researcher, getting to work for her was a blessing in itself (made better still by the weekly Friday morning grub she brought to the lab meetings which was always quickly demolished J).

Outlining ASTEROID to me, you could see how exciting the project was to her and the team. As the weeks went on, I also got increasingly excited about the project as I got more involved and watched developments taking place to reach the target- releasing a 3D glasses free Stereotest to be used in clinical settings.

The two main colleagues I had contact with were Adam and Kathleen. Both were friendly and welcomed me straight away. Kathleen is the Research Associate on ASTEROID whilst Adam was the Administrative Support. I remember two main things from my first day. Firstly, the faff I got myself into with the laminating machine- I never fully appreciated the difficulty of firstly printing onto A3 and then laminating…this was my first ever task and I think it must have taken me about 2 hours to complete, which would’ve taken a sane person 10 minutes. My time was improved slightly with the constant input of Adam who is always willing to give people a hand. Secondly the huge amount of psychophysics reports I had to read- which I still haven’t completed six weeks on due to the complicity of them! At the time it felt like I was thrown in at the deep end. However, looking back, the tasks given to me gave me a chance to get to grips with the project before helping with PPI and data collection.

Throughout the weeks Spent at ION I met many different researchers (mainly by constantly swapping desks and getting new desk partners!). Hearing about the range of experiments they were conducting is amazing! The variety of backgrounds the researchers have is also intriguing- they had ecologists, engineers, psychologists, chemists, physicists… the list goes on! The first research I took part in was for a researcher called Zoltan- a whacky engineer studying vision using EEG. Although the brain readings were complicated to understand, it was still an experience and the accumulation of chocolate and vouchers I gathered from continuously doing his study was a bonus! People who are scared of EEG; don’t be! You can’t feel a thing.

I only attended one meeting solely for ASTEROID; every month different team members such as clinicians, illustrators, game designers and researchers all gather together for a Project Management Meeting. Topics of discussion include: the impact ASTEROID is having, how to improve the game design and the next steps needed. As a newbie, I kept my mouth shut and watched. Listening to the ideas bounce back and forth between different experts in their fields and explore all options and future possibilities was mentally draining. The enthusiasm everyone had in ASTEROID was evident and seeing the group dynamics was fascinating.

Other people I got to know included: Will, a Psychology graduate from Newcastle who had worked for Jenny before; and Maeve, a sixth form student getting some work experience. When collecting data at the Centre for Life, the experience was definitely made a lot more interesting working with other people and joking around a little (mainly Will and I). We also filmed scenes explaining fluid pixel and the general research happening in the lab to create a few short videos. It’s safe to say I won’t be becoming a camerawoman any time soon but it was still amusing, a fun task and a chance to see more research in action. Both students were great personalities that made my experience brighter. 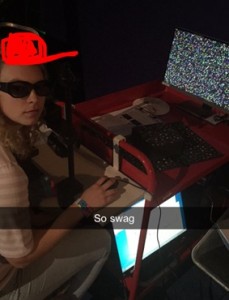 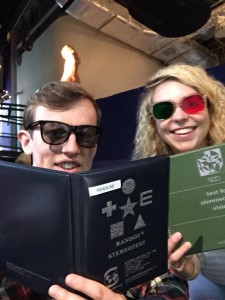 Going out into the public and watching children play on ASTEROID is definitely the highlight of my experience. The  ‘bounce’ session in Sunderland especially stands out to me, when children with eye impairments met and played the game. Meeting individuals that ASTEROID could potentially help let me see the rewards of the project in a much clearer light. ASTEROID is for such a good cause and without the team of dedicated researchers this project wouldn’t be possible…I can only wish them the best of luck for the future and hope to return to the Institute at some point! 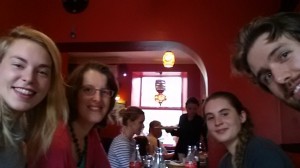 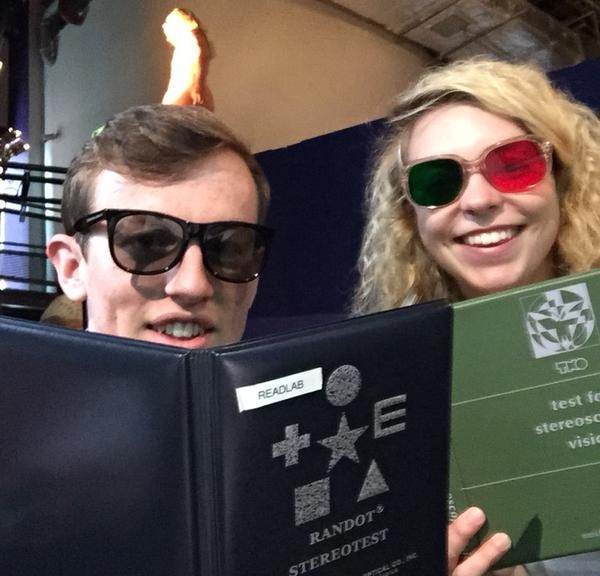 Last week Will, Maeve and I showed our research at the Centre for Life’s “Game On 2.0” exhibition. Two tests were being run, firstly, comparing the ASTEROID test to current tests: Frisby, Randot and TNO.  Secondly, measuring the average person’s depth perception on psychophysics equipment Ignacio had set up. To run all the equipment we had quickly learnt beforehand how to use the stereotests, record data and power up Ignacio’s experiment.

As the Centre currently has the “Game On 2.0” exhibition on, we were bang in the middle of 60 years’ worth of games, all emitting different sounds. Although exciting at first, these snippets of Mario Cart and Clash of the Titans began to grate on us by the end of the week! We were constantly on our feet testing the many children that circled to the table to get their eyes tested. All the children seemed to enjoy ASTEROID and the parents were willing for us to take down data for both experiments. We received lots of feedback, got a large sample of data and are excited to see what the stats will show! Altogether a lovely week interacting with the public 🙂 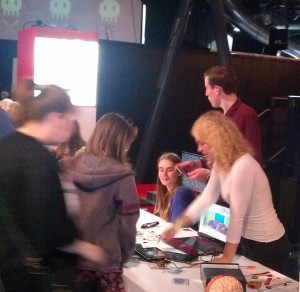 We went to the Centre for Life and had a stand in the Game On exhibition so that we could get children to participate in our research. We managed to get lots of children of a range of ages to take part, which was great and really helpful. We had two separate tests going on; a test of ASTEROID compared to other, currently used stereotests; and a psychophysics test to get an idea of the average population’s stereovision.

Sometimes it was really quiet and you could just hear the sound of computer game characters dying and shooting one another on the many screens in the exhibition, and at other times we were rushing around to cope with the numbers of people crowding around our stand. We found that as soon as you had one person doing the experiment, other people were curious and wanted a go too, so we tried the tests ourselves in the quieter moments. I’d never done any of them before, only being new to the project, so I quickly realised why the children were finding some of the tests difficult, by struggling at them myself. The children found the tests a range of difficulties- due to not understanding our instructions or by being nearly stereoblind. I was only there for two days but in that time we gathered lots of data and I found out more about the project. 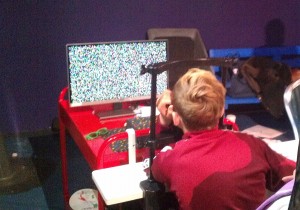