Wow, that was a really inspiring day! I was blown away by these children.

3 months we have prepared for this. Almost every Monday evening we gathered together in the Story Lab at Seven Stories. So many times that I have climbed the stairs to the sixth flour wondering what this evening might bring. Every time it was different: browsing books, talking to a cartoonist, getting inspired by each other’s stories, doing some drama exercises, counting “1, 2, kwak!” but every time some magic happened. I wasn’t always aware at that very moment, but when going home I experienced my mind set had changed in the past hours and my brain came up with the most original ideas on the train home. I did not know I could be so creative. It was inspiring to spend those evenings with artists and researchers studying subjects like soil, literature, statistics or photosynthesis. If you bring people from very diverse backgrounds together in a room where every idea is welcomed, that’s when the unexpected happens. Also, I could have never believed children’s books have so many big ideas. There is so much more to them than, say, a story about a fish stealing a hat, or a boy finding a treasure box! I vividly remember our introduction session. I was not sure how children’s fictional stories could in any means be helpful in explaining neuroscience research. But then Debbie Beeks from Seven Stories started to read “The Conquerors” by David McKee . The book tells the story of a general that conquers a village. After some time of occupation, with his soldiers living in the village, the soldiers become friends with the villagers. They got to know each other and now laugh and drink together, and enjoy themselves in games. The general doesn’t like all this sociability towards the villagers and sends his soldiers home. He brings in a new army to regain order. At the end of the book the general goes home and when his daughter asks him at bedtime to sing a song, the only song the general can think of is a local song from the village. The way Debbie read that story brought me back to my childhood and I was listening as intrigued as a 5-year old. Once she finished and told us that a researcher used this book to explain how cancer cells invade the body and merge with our healthy cells, I was amazed by the Big Idea that was hidden in this book. In the weeks that followed on the first meeting, I discovered more hidden layers in children’s book. One book can tell so many different stories! It just depends on the way you look at it.  In the beginning I wasn’t sure that there would be a children’s book that would fit my research; I ended up with two books to explain my research (and I could easily have found more!) 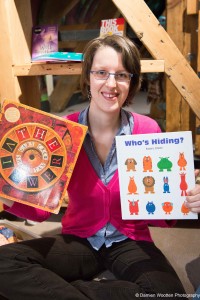 On Tuesday March 31st, all this work and creativity came together. The evening before, we gathered for one last time to set up the room and run through our presentations. You could feel some nervousness hanging in the attic of the building, although probably excitement or curiosity would be as suitable descriptions of the atmosphere. Together with my fellow neuroscientists, we made a cosy corner on the carpet surrounded by Big Ideas books and left it to the darkness of the night and the stuffed animals. I wouldn’t have been surprised if the animals had come to life to play with the characters in the books that night or to explore our research objects… But the next morning, everything looked the same! After a short briefing, we took our positions in the room to welcome the children and tried to control our nerves by firmly holding our cups of tea or coffee. When the first school arrived you could feel the slight uneasiness in the room. The children looked around the strange place, not sure how to behave; and the researchers, were altogether away from the children (also not sure how to approach the 10-year olds). However, a few minutes later we were searching for the hidden animals together – and I learned from them what a Kingfisher is! Shortly after Debbie’s welcome we(the neuroscientists) organised our small group of children on the carpet. Although initially, they were a bit shy, after a few games they were difficult to stop from asking questions and relating our research to their personal experiences. 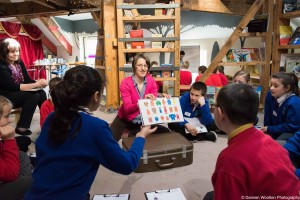 I think we really succeeded in creating an open friendly environment where all questions could be asked and all ideas were welcomed. I had started my session with ‘The Viewer’ by Shaun Tan that tells the story of Tristan, a boy who is very curious from birth and is obsessed with inquisitive artefacts. One day, he is searching the city dump for more interesting objects and finds a strange box filled with bizarre optical devices, including a 3D viewer. At this point in the story, I showed the children my box of optical devices and asked them to be like Tristan and explore my objects to find out what my research was about. They very much enjoyed exploring my suitcase. It contained a brain model, my notebook, a graph, red-green  3Dglasses, a 3D viewer, photos of children with amblyopia or strabismus, a photo of a mantis wearing 3D glasses, tablets, and random dot stereograms. It was amazing how quickly they understood my research was about 3D vision and the brain. Afterwards, we did a little experiment showing how both eyes are needed to work together for seeing 3D. By looking at some pages of the book “Who’s hiding?” by Satoru Onishi, the children realised our brain is also necessary for interpreting what we see. This provided  a good introduction to explain amblyopia and strabismus, visual conditions related to brain and eye disorders respectively. You can imagine their excitement when I then showed them the 3D tablet game we are making to help treatment of these visual conditions! The questions and discussions that followed amazed me. Children can really think outside the box! They asked me questions I have never been asked before. During the lunch break some of them came back  to have another play on the game. They were really engaged, and suddenly we were involved in a discussion about potential game improvements. Some new Big Ideas were born! Mind-blowing, it was my highlight of the day. The afternoon was as entertaining and stimulating as the morning session. Besides the researchers and children, other creative minds were present on that day. 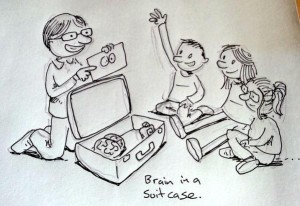 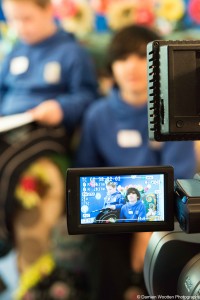 We had Nigel Auchterlounie documenting the day in cartoons and a film crew was capturing children’s views on our research project. I was surprised  how eager the children were to be interviewed in front of the camera (I wasn’t that enthusiastic when it was my turn later on!). I’m looking forward to seeing the results of all this filming. So curious to hear how the children explained my research project. Before going to the busses that would take them back to their schools, the children fed back some of their experiences of the day. I can’t describe how it feels when a 10-year old spontaneously says that you shaped the next generation of researchers. Also one of the teachers emphasized the impact this day would have on their life and later career choices. I don’t think there could have been a better ending to this Seven Stories project. 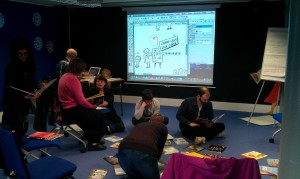 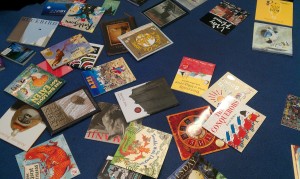 So we now have another event in our diary: on March 31st, we will present ASTEROID at the Big Ideas event at Seven Stories in the Ouseburn Valley! Using children’s books we will explain 3D vision to 10-12 year olds. I’ll be participating in several workshops organised by Seven Stories to explore how we could use children’s books for ASTEROID. So, I’ll be on a quest to find the perfect book for our project. What’s really exciting is that there are some artists involved too! They will be at the workshops inspiring us to make use of drama, film or cartoons in our activities. I’m curious what will come out of these workshops.  It will be great to explore new creative ways of communicating science!