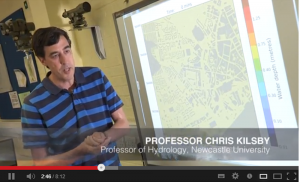 One year after the #ToonMonsoon, the film is released at the Tyneside Cinema.  The film is the result of a winning idea submitted to the first LWEC short film competition by Northumbrian Water and Newcastle University.

‘Flood Force: finding solutions in good company’, features Northumbrian Water staff and CESER academics Professor Chris Kilsby and Professor Hayley Fowler. The film uses the North East’s experience of flooding from extreme rainfall in June 2012 to show how leading UK research can contribute to better decision-making, with a particular emphasis on how business can take action to reduce the risk and therefore the costs of flooding.

The film describes the actions that have been taken by local businesses at large and small scales, whilst calling for more collective action by putting in ponds, green roofs, water butts, permeable paving and other measures which slow down runoff to avoid inundating roads, storm drains, sewers and water courses.

CESER’s experience of crowd-sourcing information on flood risk, city-wide flood modelling and high resolution climate modelling has been central to understanding the convective summer rainfall that inundated Newcastle in 2012.