One of the most interesting – and challenging! – aspects of the Newcastle City Futures exhibition and events series has been bringing so many individuals and organisations together.

It’s been fascinating making connections, meeting our partners (some old and established and some new), finding out about the different initiatives and activities going on across the city, and bringing it all together under one roof.  The evening events series will definitely have something for everyone…

The individuals running the family workshops are brilliantly inventive and enthusiastic, it’s been a particular highlight to meet with them and hear their ideas. We’re sure they will keep your small ones (and not so small ones) entertained.

For all the events details have a look at our leaflet: NCF events series

On Wednesday 26th March our curator Emma Coffield spent the afternoon with Sarah Bouttell, Assistant Archivist & Librarian at the Baltic Centre for Contemporary Art. Sarah found some really incredible material for us, including photos of the arrival of the Millennium Bridge and this beautiful drawing of the original Baltic Flour Mill from 1947 – come along to the exhibition to see a full sized version! 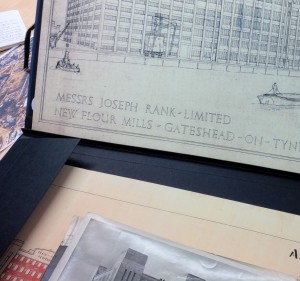 You can also view an online version of the archive here (http://archive.balticmill.com/) or make an appointment to go in – we’d recommend a visit!

Join us to celebrate change and renewal in Newcastle and Gateshead since 1945 in a major new exhibition and series of interactive events.

Focusing on how we have always looked forward, Newcastle City Futures examines significant architectural and planning projects that have shaped and reshaped the city in the latter half of the 20th century and continue to do so in the 21st century. From the development of the Metro and the airport, to the building of Byker, the conservation of Grainger Town, the construction of the central motorway, the redevelopment of St James’ Park, the creation of the internationally-renowned Quayside, and to new projects in the Stephenson Quarter and Science Central, this is the story of how one place has continually evolved, and of the people of Newcastle and Gateshead who have been central players in that change and renaissance.

Featuring a rich variety of models, plans, information boards and photographs, some of which have never been on public display before, the exhibition will chart the forward-looking visions that have been a hallmark of Newcastle and Gateshead. This includes projects that were planned and built, and those that were unbuilt and never finished, such as the motorway under Northumberland Street, the Tyne Deck construction over the river, and ‘the Geordie Ramblas’.

Interactive elements will help you get a taste of what it feels like to be an architect and
planner, and there are opportunities to make your mark on the exhibition by identifying
those places and buildings in the city you love and loathe. Bring along the whole family
to create a vision of the future, or drop by and pick up a mini-planner pack for the kids!
The exhibition is supported by a comprehensive program of events, jointly hosted by
Newcastle University and its partners. We want to start a ‘big city conversation’ and engage everyone in debates about the city’s future, so take your pick from a range of free events, including film screenings, presentations and panel debates hosted by businesses, service providers, community organisations in the City Forum. The prefect opportunity to have your say and talk with those currently developing new plans and strategies for the future of Newcastle and Gateshead!