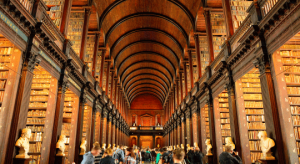 John Goddard and Ellen Hazelkorn examine the policy and leadership challenges of higher education’s engagement with the outside world.

Across the US and much of Europe there is a growing populist backlash against globalisation. Almost everywhere there is a decline in public trust, and less public tolerance of institutions, such as universities, which are perceived to be promotors and beneficiaries of this process. This is exemplified by international mobility of students and academics and their fostering of cultural diversity and cosmopolitanism over national identity. This backlash is reflected in support for Donald Trump, various populist parties in national and European parliamentary elections, and most notably in the English (as distinct from UK) vote in favour of Brexit.

As one analyst has noted: “The vote for Brexit was delivered by the “left behind” – social groups that are united by a general sense of insecurity, pessimism and marginalisation, who do not feel as though elites, in Brussels and Westminster, share their values, represent their interests and genuinely empathise with their intense angst about rapid change. Thus support for remain ranged from 18% of those with no formal education, to 57% among with those with a degree and 64% of those with a postgraduate qualification to 88% for academic staff.

Not surprisingly university towns were islands of remain in a sea of Brexit.

In US counties with a leading university, Hillary Clinton was 11 points on average higher than her state-wide percentage. For example in Orange County the home of the University of North Carolina she received 74% of the vote but lost the state with a 48% score. People with lower geographic mobility who had not moved around the US or had an international experience were also more likely to vote for Trump.

For the Brexiteers university lobbying before the vote was interpreted as narrow, self-interest in terms of access to research funding, “foreign” EU students and academics. During the US presidential election politicians frequently rubbished the knowledge and wisdom of academic “experts”, not least their stance in relation to global environmental challenges. As one of the leading Brexit campaigners, a former minister of education in the UK observed “I think people in this country have had enough of experts”. For them “the people” of a nation are deemed to know what is right and wrong intuitively.

This turbulent environment poses major challenges for universities and their leaders. Disregarding party political interpretations, the electoral maps in the UK and US highlights an enormous gap between universities and university towns, and their publics. It raises fundamental questions for universities about how best to engage with local civil society as well as competing in the global higher education market place. There is both a necessity and opportunity to develop new frameworks and processes, to re-assert the “public good” role of HE and to reconnect the university with its multiple publics.

Seeking to widening participation in higher education, addressing social exclusion through student-community action and promoting economic development through university-business research links is not enough. Rather the underlying institutional structures of the established university need to be transformed so that civic engagement is embedded across the whole institution.

In The Civic University: The Policy and Leadership Challenges we seek to address this challenge by developing a normative model of the university contributing to the public good and from this model draw out practical lessons for university management on how to embed engagement with civil society in the heartland of teaching and research rather than as an inferior “third mission”. We codify the extensive academic literature in this field and review higher education and other public policies that both drive and inhibit civic engagement both globally and locally and report on a developmental process guided by us in eight institutions in four northern European countries: University College London and Newcastle University in the UK, Amsterdam and Groningen Universities in the Netherlands, Aalto and Tampere Universities in Finland, and Trinity College Dublin and the Dublin Institute of Technology in Ireland.

Key questions addressed include: What is the Civic University, and how can we use this concept to understand higher education’s engagement with the outside world in varying institutional and geographical contexts? What are the appropriate internal structures and mechanisms required for a university to effectively encourage and support civic engagement activity for the greatest societal impact? How can embedding civic engagement in individual institutions and the steering of higher education systems be facilitated by changes in higher education and related policies at the sub-national, national and European level?

This last question is particularly important given the policy silos that exist between higher education, research and innovation and city and regional development in many countries and in international organisations like the European Commission. All of these stakeholders need to recognise the changing nature of innovation – underpinned by the widespread adoption of digital technologies – from a linear process to one requiring co-production of knowledge with users including business and citizens working together in particular places to address grand societal challenges like climate change, demographic ageing and migration flows. Leading universities all too often receive funding for upstream scientific research with no attention being paid to societal needs, impacts and benefits or the development of downstream absorptive capacity. Higher education policies and metrics like citation indices and other performance metrics simply reinforce practises within universities that reward the academic community in a very narrow way and do not incentivise engagement with civil society.

In this context, the concept of the “civic university” is especially timely. Historically, of course, it formed the bedrock of higher education – the great Victorian foundations in the north and midlands of England, the land-grant universities in the United States. But more recently they (or, more accurately, their values) have been shouted down by the drumbeat discourse of “world-class” universities driving a schism between local, regional, national and global responsibilities and priorities. Some people may argue that this is not higher education’s purpose. We disagree.

Higher education needs to make itself relevant to the global
challenges that threaten the future of humankind.

Universities need to rethink what it means to be a public institution in the 21st century, in part because the publics which support higher education through taxation need to believe that they are getting value. But also, higher education needs to make itself relevant to the global challenges that threaten the future of humankind. This reformulation of an old idea, the civic university, challenges us to ensure that through teaching, research and engagement, universities place themselves at the centre of the local-regional-global nexus, working multi-laterally and multi-dimensionally, to make a difference. The civic university is a value statement as much as a new way of organising higher education; it is about encouraging universities to have souls, to nurture a normative commitment to improve the lives of communities, regions and nations and the world at large.