Ulrike Thomas and David Leat have run a 9 month project funded by the Economic and Social Research Council Impact Acceleration Fund on Community Curriculum Making.
Ideally this sees schools working with community partners to plan and run meaningful, challenging projects for pupils. While this might sound like familiar territory for some schools, the hallmark is the extent to which the community partners are involved, both in planning and in providing a wide array of resources and experiences from community assets. Our slogan is that pupils need ‘to go places, meet people and do and make valuable things’.

Educational progression becomes more than meeting subject targets and as much about developing social capital, informed aspirations and complex identities. This is hard to achieve sat in a classroom just doing work for your teacher. To extend a famous aphorism ‘it takes a city to raise a child’.

The project culminated in an event in July attended by 70 people. This included a group of students from Belmont School in County Durham (thank you Laura Jackson) who had been taught by community members over the course of a week to play brass instruments, with a public performance at the end of the week. They were going places, meeting people and doing a very valuable thing. There were various other table seminars hosted by schools and community partners. The principle outcomes of the project is a Guide to Community Curriculum Making and an agenda for further action and research. Please contact David or Ulrike if you would like a copy.

In addition David has just completed a book Enquiry and Project Based Learning: Students, School and Society to be published soon by Routledge.

Rapidly becoming an annual event, the CfLaT research showcase offers teachers, students, school leaders, educational practitioners, academics and policy makers a chance to find out about recent research activities and outcomes. And it’s free to attend!
Presented by members of CfLaT, the showcase will include research presentations and Moot ‘How can we ensure all children achieve?’. As ever, there will be plenty of opportunities for networking. Wednesday, 5th October 4pm-7.30pm, King George VI Building, Newcastle University See programme here. 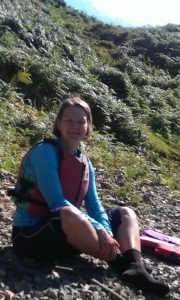 Sam Shields is a newly appointed lecturer in ECLS who will be teaching research methods to our undergrad, masters and doctoral students.

Sam’s research interests include assessment and feedback, research methodologies for pedagogic research and emotions and power in the learning process. She presented a paper at BERA about pedagogic research methodologies in the Netherlands and the UK. She is in the early stages of collaborating with colleagues in the HungarianNetherlands School of Educational Management on a project called the ‘Learning School: International Comparative Research’. She is looking forward to collaborating with colleagues in CfLAT and is always happy to chat about research.

In January this year CfLaT col-leagues submitted evidence to the Education Committee as part of their inquiry into the ‘Purpose of Education’. A condensed ver-sion of our submission was later posted on the BERA Blog (https://www.bera.ac.uk/blog/some-thoughts-on-the-purpose-of-education). Following that, in July Simon Gibbs received an in-vitation to attend a conference convened by the committee as part of their ongoing inquiry into the ‘Quality and Purpose of Edu-cation in England’. Here Simon reflects on the experience .

The day consisted of a mix of invited speeches (including Gert Biesta, Daisy Christodoulou, Dame Alison Peacock, Michael Young, Mary Beard) and a range of ‘breakout sessions’ in which we were invited to discuss specific topics – choosing two from ten. I opt-ed to join one led by Anna Vignoles that was devoted to ‘Social mobility in education’; and the other, led by Ste-phen Drew, headteacher of Brent-wood County High School that was focussed on ‘Behaviour and discipline’. Other groups considered ‘Employability’, ‘Parental engage-ment’, ‘’Primary assessment’, ‘Standards’, ’14-19 assessment’, ‘Educating outdoors’, ‘Expressive arts and creativity’ and ‘well-being and mindfulness’.

During the course of the day we also heard from representatives of Swiss and Finnish governments who gave us rather different perspectives on how education might be envisioned and operationalised.

During one of the breaks I was able to talk with Neil Carmichael, who chairs the Education Committee and noted the breadth and diversity of topics under consideration and won-dered about how it might be possible to arrive at any meaningful conclu-sions. He admitted that the ‘strategy’ was deliberate and part of an open-ended inquiry and that the committee was determined to pursue the issue.
Mary Beard, who perhaps might at first seem an unlikely key-note speak-er at such a conference, reminded us that education has been a ‘political football’, since at least 399BC (see the copy of her speech here) She admit-ted that for her ‘education in the broadest sense is one of the most elusive subjects in the human scienc-es’ and concluded by suggesting that we might ‘abolish a few paper trails and initiatives, trust the judgement of teachers on the ground more – and in general ‘loosen up’’.

For me that sounds like good common sense but not, I fear, a prescription that may sit comfortably with Neil Carmichael and his committee col-leagues. I sensed a genuine intellec-tual fascination with the issue (what is the purpose of education?) but the committee may be unable to locate best fulcrum for the lever of change.

In the context of Brexit, grammar schools and the balance of power at home and internationally who is going to really give a fig for education? Alt-hough the Finns are overhauling their education policies, even they fear the incursions of realpolitik and the cold heart of international economics. For the foreseeable future I suspect the voice of folk like Daisy Christodoulou (‘‘Girl number twenty unable to define a horse!’ said Mr Gradgrind’) will be more likely attended to than the wis-dom of Gert Biesta. Sad times and Hard Times (again). 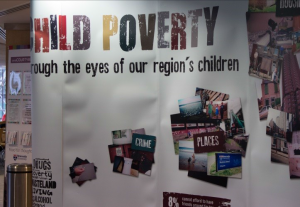 Laura Mazzoli Smith and Liz Todd have been engaged in an evalua-tion of a high-impact Children North East audit called ‘Poverty Proofing the School Day.’

Their evaluation produced a report, which has been widely circulated and taken up, and was part of a BERA presentation on community-led school reform in September.

The evaluation and work around the concept of poverty-proofing formed part of an event hosted by CfLaT on July 12th, ‘The Impact of Poverty on Education – New Evidence on an Old Problem’ with invited speakers Profes-sor Ruth Lupton from Manchester Uni-versity, Sara Bryson from Children North East and Irene Cussó Parcerisas from Ramon Llull University, Barcelo-na.
Laura has also recorded a short Youtube video for teachers and teach-ers-in-training on the key principles of the poverty-proofing process, available here

Our Wednesday Research teas aim to provide an informal forum for discursive exami-nation of emerging research themes and concepts.

Tea and cakes will be available from 3.45pm in the Centre base (KGVI 2.50), unless other wise stated, with the session officially beginning at 4pm.

Further information about the research teas from laura.mazzolismith@newcastle.ac.uk
or from the Centre website (http://www.ncl.ac.uk/cflat/news/Teas.htm).

CfLaT is delighted that Kim Cowie has been appointed as a Lecturer in Education specialising in Profession-al Learning. 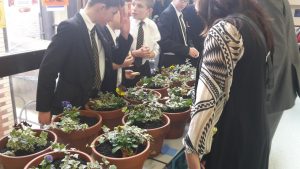 Kim previously taught in a number of lo-cal schools, most recently being Deputy Head at Park View in Chester-le– Street. While there she was an enthusiastic col-laborator in the Community Curriculum network initiated by David Leat and Ulrike Thomas.

CfLaT was present in strength at both the European and British education research conferences, ECER and BE-RA.

We took papers on CfLaT projects, but also used the opportunity to present with academics from other universities, across the UK and Europe who are partners in our research. See page 4 for details of our papers and please do contact col-leagues for further information.