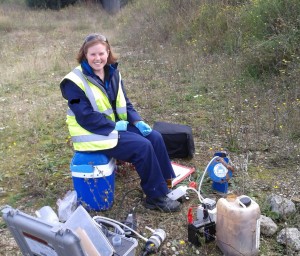 The Glamorous World of Groundwater Monitoring

I work as a contaminated sites consultant, investigating historical pollution on sites around the UK.  To assess contamination we use the source-pathway-receptor concept to create a Conceptual Site Model (CSM) which helps us understand whether contaminants at a site are actually posing a risk to groundwater or human health.  The actual day to day job I do, involves desk studies, data reviews, letter and formal reports, site investigations including groundwater monitoring well installation, permeability testing, soil and air vapour monitoring and groundwater and soil sampling.

My MSc was essential for getting this job, in particular, the analytical chemistry helps me understand how my samples are analysed by our laboratory subcontractors, and the source and fate of pollutants and hydrogeology aspects are valuable for developing CSMs.

I enjoyed the small class sizes, the contact time with lecturers and most importantly the lab time.  It’s a great asset to understand the lab techniques and potential errors, and to be able to factor them into my work now.

A masters is hard work, it can be academically challenging and the volume of work can be difficult as you are learning new concepts all the time.  It was definitely worth it though.

Make sure you join some of the clubs to get out of the department-you don’t want to spend your life in the Drummond computer room! 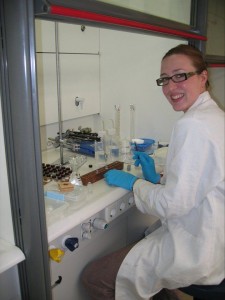 PhD title and year of completion: Ladderanes as tracers for present and past anaerobic ammonium oxidation; 2012.

2) What big questions did you tackle in your PhD?

My PhD studies revolved around the question: “Are there lipids which are both specific to bacteria performing anaerobic ammonium oxidation (anammox) AND stable enough to be preserved in marine sediments over long periods of time (during which the lipids are exposed to oxidizing conditions and extreme temperatures and pressures)?”

This was an especially challenging question because the lipids we currently use as tracers for anammox bacteria in present-day settings (ladderane lipids, with concatenated cyclobutane rings) are very labile and are degraded quite quickly. In order to answer my PhD question, I exposed these ladderane lipids to the conditions they would see during sediment burial. Fortunately, I found lots of lipids which were products of the degradation of ladderanes, and I was even able to find some of them back in marine sediments. Like with most PhD projects, the answer to my question brought forth many more questions, but that’s the exciting thing about science.

3) On average how many years does it take to complete a PhD in the Netherlands and how else is the system different from the UK?

In the Dutch system, PhD research last 4 years. The remarkable difference that I have found between the UK and the Netherlands is what I was paid during my PhD. I was considered a “researcher in training” (quite literally the Dutch translation for a PhD student), and therefore my pay reflected that of a young researcher, not a student.

4) So you’re currently a post-doc, what part of post doc-ing do you enjoy the most?

I really enjoy not having the weight of completing my thesis on my shoulders (though I should probably point out another difference about doing a PhD in the Netherlands is that I didn’t have to write a thesis in the same way as it’s usually done in the UK. A Dutch thesis compiles all the papers you’ve written over the course of your research. The thesis itself is also mostly in journal format. The standard for my department was to have more than four papers, with at least one accepted for publication in a peer-reviewed journal, before being about to defend. This might seem like a lot, but we also didn’t have to write up in the same way. The bonus is that all Dutch PhD students walk away with at least one publication under their belt.) Besides that, I like being part of the group project here at Newcastle University. I was the only one working on ladderanes at the NIOZ, which was a bit lonely research-wise at times. 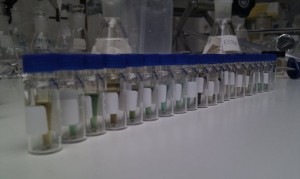 Look at all those colour! Samples from the coast of Peru (ODP cruise 201).

5) What was the most challenging aspect of doing a post doc?

I guess it’s having to now think about where the money will come from next. At the moment, I have two years left on this postdoc, and realistically I should already be thinking of funding.

6) Best travel perk of the job?

During my PhD, I participated on a cruise in the Lau Basin (in the Pacific, between Tonga and Samoa) where we collect hydrothermal vent samples (thousands of meters below the water surface) with a remotely operated vehicle. It wasn’t even for my own research. The postdoc who was going to be working on the samples hadn’t started yet so I got to go in his place. I don’t think I thanked him enough for the vacation I got on Samoa afterwards.

7) Reflecting on your career so far, which publication are you most proud of?

Probably the one that isn’t published yet. The last chapter of my thesis involved pretty much every technique an organic geochemist could ask to use: GC-MS, LC-MS, sample purification, compound specific isotopes, NMR,… What I really enjoyed was combining the different approaches to have an interesting story about thermally stable aliphatic hydrocarbons produced during the hydrous pyrolysis of anammox biomass.

Don’t let a bad science day get you down. 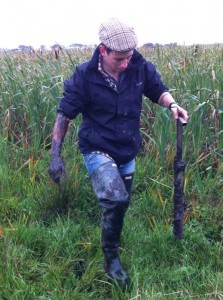 1) The Twitter challenge: What are you doing now in 140 characters

My current research stems directly from my MSc dissertation.  Originally designed as an exploratory piece of research, strong results led to successful funding applications and the continuation of my research.  The skills I learnt throughout the MSc course have ultimately given me a fantastic basing for continuing my research.

3) What did you enjoy most about your masters?

The strong microbiology modules, something I had never studied before.

4) What was the most challenging aspect of the masters?

Realising I had forgotten almost all chemistry since school, and subsequently having to teach myself the basics again.

Don’t be afraid to try something new, even if it is out of your depths and means a lot of hard work.

To find out more about quantifying aquatic carbon flux check out Peter’s blog at http://a-c-f-g.blogspot.co.uk/ 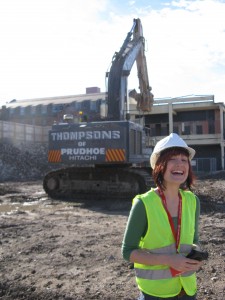 October 2010 – onsite at the demolition of the Trinity Square (‘Get Carter’) car park, Gateshead, Tyne and Wear

PhD title and year of completion: Engineering Soils to Act as Carbon Sinks (2013)

Investigating how soils can be engineered to chemically capture carbon dioxide from the air and store it, safely and permanently

2) What big questions you are tackling in your PhD?

Whether soils can be engineered to remove potentially large quantities of carbon dioxide gas (a major contributor to climate change) from the atmosphere. I am currently investigating how some industrial waste products can be combined with soils to chemically capture carbon dioxide from the air and store it, safely and permanently. My work will help to advise industries in developing creative ways of using their waste materials for an environmental benefit.

3) What part of your work do you enjoy the most?

Getting out in the open air, working on real-world sites and seeing the results of my work first-hand.  Interacting with possible stakeholders in the approaches used, from environmental and policy perspectives.

4) What’s the most challenging aspect?

Isolation – one of the classic challenges of the PhD, feeling as though you may be the only person in the world so involved in the trials and tribulations of your work (once you get out and chat to other researchers you realize that this is pretty much never the case!)

The humble shovel – the piece of equipment I have done much of my best work with (or in more extreme cases, the mechanical excavator).

6) Best travel perk of the job

A close tie between getting to travel the wilds of Alberta, Canada, as part of a summer school on climate engineering, and cycling a hire bike over the Golden Gate Bridge (while singing a wonderfully off-key rendition of ‘We Built this City’) during the American Geophysical Union Fall Meeting.

Use your time wisely, but don’t be afraid to take on other projects and try new things. PhDs are designed to produce great researchers, with many more facets than simply being a great technical worker. Getting involved in activities outside your PhD can make you a better-connected, happier and ultimately more employable individual.

Welcome to our new Geoscience blog brought to you by PhD students at Newcastle University.  This blog will bring you the very latest geoscience news along with insights into research and academia.  Stay tuned…