How do you get communities more involved in their local environment? What changes can be made that can really make a difference to surroundings with a limited budget? Daniel Mallo, a researcher in the School of Architecture, Planning and Landscape tells us about a project that helped the locals of Fenham Hall Drive in Newcastle realise a different vision for their local space.

The Pocket Park idea came about almost by accident. Fenham ward, in the West End of Newcastle, had received some funding for the Sustrans DIY Streets Project to involve local people in improving their area, making streets less car focused and more generally ‘help them redesign their neighbourhoods putting people back at their heart.’ Through an ESRC IAA grant we supported Sustrans’ work by strengthening community aspirations and sparked inspiration into the potential of their local environment. 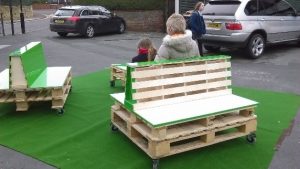 Later we conducted a focus group using large photographs of the street that could be sketched over, to foster further discussion amongst participants. During these different stages local people identified a need for a place where they could sit and watch the world go by. Many residents also commented that the library, swimming pool and doctors’ surgery on Fenham Hall Drive formed a community hub but that there was nowhere to wait for their children. Taking these ideas into consideration the project concluded with a pop-up public/play space between the library and pool for four days, which gave members of the public, residents and other stakeholders the opportunity to experience the potential impact of a public space in the area. This temporary space showed, more than a model or image could ever do, the way in which people could change their environment for the better.

Cllr Marion Talbot, a City Council ward member for Fenham who was involved in the project from the beginning, was interviewed about the Pocket Park when it was opened this year. She said that “it has been refreshing the way residents, community groups and organisations have all joined together to make this project happen; and unite with a common goal of providing something extra special for the area and forging invaluable working relationships that could prosper in years to come.” 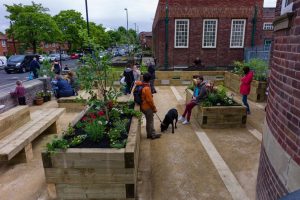 To find out more about the ESRC IAA grants, please click here.