On the 30th November 2016 we ran an afternoon of presentations, networking and discussion surrounding the theme of Working Together: Bringing About Change at Newcastle Civic Centre. The event showcased some of the partnerships that our social science, arts and humanities researchers have with a wide range of organisations and communities in the region, and beyond. Over the next few months on the blog we will be sharing some of the presentations from that day. Following on from Daniel Mallo’s piece last week, Rachel Smith tells us more about her speedy presentation…

In 2016, I presented this Pecha Kucha about the Vital North Partnership between Newcastle University and Seven Stories: The National Centre for Children’s Books at two events; the Arts and Humanities Research Council’s Common Ground event in June, and Newcastle University’s Working Together: Bringing About Change event in November. 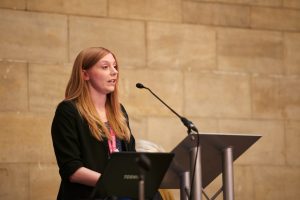 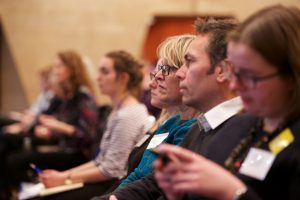 Both events explored collaborations and engagement in the humanities. Pecha Kuchas are short, visual presentations. As you talk, you show 20 images, each for 20 seconds. Your slides change automatically. And they’re more than a little tricky to deliver…

The Vital North Partnership (+ 19 other ways Newcastle University and Seven Stories are collaborating) is exactly what the title suggests: a presentation about 20 current Partnership projects. And what are those projects? Well, watch the video and find out!

With thanks to Jeff Wilson from the School of English Literature, Language and Linguistics, who produced this video. The photographs from the event are courtesy of Zander Photography.