Last month Steven Vass of The Conversation visited HaSS in association with the Press Office as part of the ESRC IAA capacity building programme. The session was split into two sections: the first was an introduction to The Conversation for those that might not have been aware of its aims and objectives.The second was more general advice when thinking about writing for a variety of audiences, not just for the site but for other specialist and general publications too.There were many surprising facts and figures presented about The Conversation:

Interestingly over 90% of that larger reach figure is via republication and the mainstream media often pick up on articles written for the site.This can sometimes mean a global audience for articles through unexpected channels.

Although many might think their research is too specialised for lay audiences, Steven encouraged attendees to consider their work in a broader way and perhaps link it with news stories and other events. It was a good reminder that there is always interest in a host of different subjects and there can sometimes be unexpected angles into different areas. The Conversation editors work alongside writers to produce short articles (normally never longer than 1000 words) however final publishing control is given to the writer. 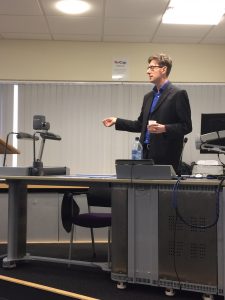 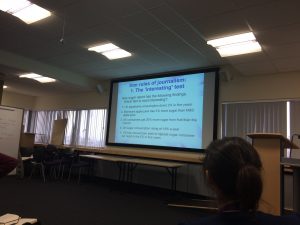 The second part of the session gave some more general ideas to think about when writing for a lay audience. One exercise presented attendees with 10 statements which were all different ways of saying ‘the cat sat on the mat’. It prompted a thought-provoking discussion in the room about what makes interesting writing and what essential facts readers must know about the subject area given a tight word limit.

Another important takeaway from the session was that keeping the audience in mind is vital but the style of writing is very much dependent on the outlet you are aiming for. This means you don’t necessarily have to avoid specific technical language or spare the details of certain projects, so long as it is relevant and understandable for the target audience.

One question to ask before writing is what the hook in your piece might be: this is also known to editors as the ‘why now’ test. In most cases (although there are exceptions) there needs to be something relevant for readers to relate to. This doesn’t necessarily have to be a news item but something recent in the public eye helps to generate interest. Steven admitted that finding the hooks can be a challenge however it is a skill that comes with time and gets easier the more you write for different audiences. The University Press Office can also offer help with developing these ideas.

Whether it is for The Conversation, a news article or other more specialist publications in your subject area there is huge value in communicating about your research to different audiences and it can have impact in all kinds of ways. People are interested in what you know, they just need to read about it!

To find out more information about The Conversation and to find a local editor to pitch an idea to, click here.