iBUILD is a consortium of Newcastle, Leeds and Birmingham Universities. It is one of two Centres set up as part of the National Infrastructure Plan, published by the Government in 2011, with funding from the EPSRC and the ESRC. The Centres’ role is to catalyse and inform the national debate about the future of the UK’s infrastructure. The aim is to develop new approaches to infrastructure business models with the ultimate goal of replacing current public-private business models that in many cases provide poor value.

These themes arise in a context where the discipline of economics and its boundaries with other disciplines are in flux. For example, behavioural economics, agent-based complexity economics, happiness economics and, in the wake of the economic crisis, heterodox economics and political economy have emerged in interdisciplinary contexts such as economic geography, management and business studies (e.g. ‘value chain’ analysis) and international political economy (e.g. ‘varieties of capitalism’). The time is apposite to harness the best of these approaches to infrastructure studies. Applications from any relevant discipline are invited. Successful applicants will be attached to the new IMBUES Centre of LUBS (which coordinates LUBS’s contributions to iBuild).

The deadline for full applications is 30 April 2014. For further information on how to apply, please contact Matthew Armstrong at phd@lubs.leeds.ac.uk or m.armstrong@leeds.ac.uk. 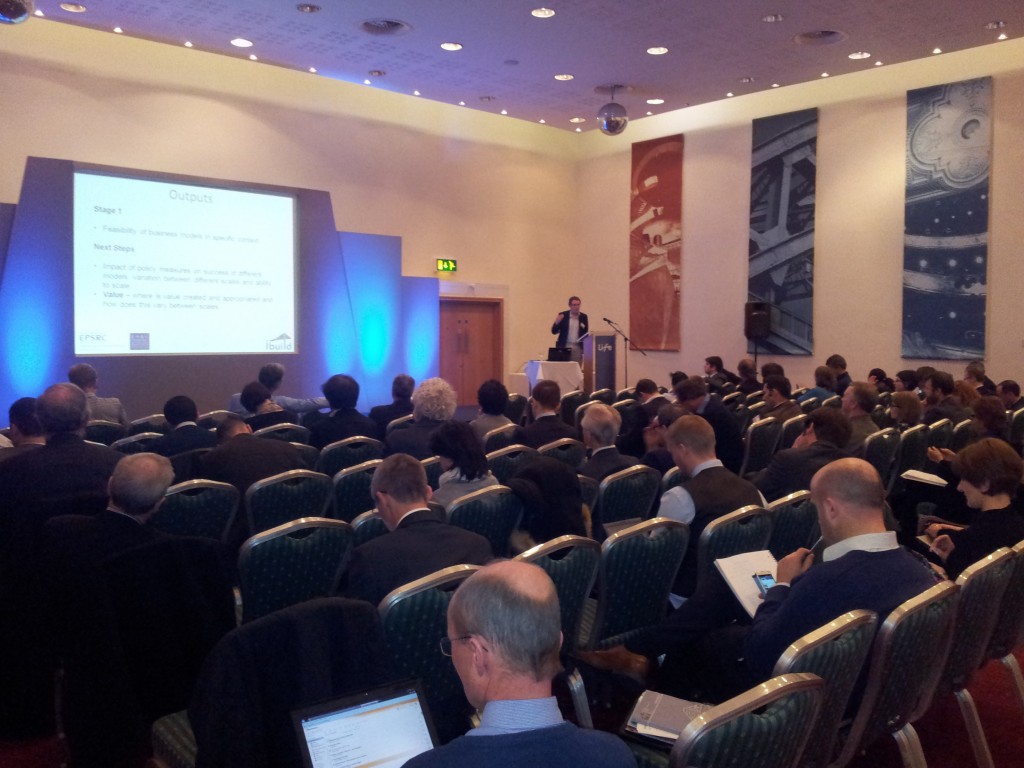 Over 80 people from industry, national and local government and academia, attended the iBUILD Stakeholder Day, which took place last week in Newcastle-upon-Tyne.  Delegates heard from iBUILD researchers on progress so far; Chris Murray, Director of the Core Cities team, and Chris Zevenbergen, Chair of the UNESCO-IHE Flood Resilience Group, provided some new perspectives on their respective work; and everyone got involved in three workshops, aimed at advancing particular aspects of iBUILD’s research.  The day was rounded off with a dinner at the historic Blackfriars Banqueting Hall.

One of the issues being covered by iBUILD is sustainable regulation and governance of infrastructure; Andy Pike and Peter O’Brien from Newcastle University are leading on this and provided an update.  The background to regulation and governance is in a state of flux: the demand for infrastructure is rising, but national indebtedness, austerity and fiscal consolidation means governments are finding it hard to find the money to respond, leading to a search for new private and public funding models.  We have already seen an appetite from pension and sovereign wealth funds for infrastructure as an attractive asset class, with green-field infrastructure projects on a par with equity investment in terms of risk.  And this willingness to invest has led to the emergence of new funding and financing methods such as asset leverage and leasing mechanisms; the Government’s City Deals programme is one area where these new methods are being applied.  iBUILD’s research is exploring how this financial innovation is continuing, and to what extent it is influenced by the different types of governance involved: whether it be an elected mayor, or Local Enterprise Partnership.

In the Q and A that followed, John Bridge from the Carillion Local Education partnership queried just how helpful large, high value infrastructure projects are to the economy as a whole; contractors find them expensive to bid for, and often they do not provide continuity of work for local SMEs.  Yet we seem stuck in this ‘big project’ paradigm.  Rupert Green from Parsons Brinkerhoff stressed the importance of adopting governance structures flexible enough to accommodate lessons learned from earlier projects.  Ben Fine from the School of Oriental and African Studies questioned the extent to which the new financing mechanisms are bringing with them systemic risk, which will ultimately be borne by the tax payer.  And Ed Cox from IPPR suggested that different models were required for different scales: he gave the example of London attracting 86% of planned Government spend, while other parts of the country were made to make do with more risky financing methods.

Chris Murray gave a talk on England’s core cities as economic and infrastructure hubs.  The overall aim of the Core Cities’ programme is for the participating cities to outperform the U.K. economy; this will require freedom at the local level, coupled with leadership capable of joining things up to deliver more, better and faster.  The programme is taking place against a growing national interest in devolution of authority, and the prospect in the next few years of a ‘fiscal cliff’: local government funding commitments exceeding funds available.  There are already discernible shifts away from mechanistic, siloed and centralised approaches towards ones that are more organic, integrated and devolved.  To be strong and successful, cities will need to: be forward thinking and outward looking; be accepting of change; have a sense of ‘self’, with the inclusive governance and leadership to match; and pursue sustainable economics.

Feedback and questions arising from Chris’s talk covered a number of areas.  Stephen Hall from University of Leeds picked up on the fact that the U.K. is still missing a big chunk of the financial architecture that will be necessary if Core Cities is really to deliver; at the moment the approach still seems to be to socialise risk and privatise gain.  Hugh Clear-Hill from Northumberland County Council stressed the need to think holistically to ensure eco-system services and links between the city and surrounding countryside are not neglected.  Julia Steinberger from the University of Leeds highlighted the risk of thinking too locally, rather than focusing on the services that people need; there is a need therefore, to be more spatially aware.  Graham Thrower from University of Newcastle asked who should own infrastructure, when the principal aim is to capture maximum public value for a given public investment.

Research into social and environmental accounting is an important part of iBUILD; Tim Foxon from University of Leeds gave a talk on a related, iBUILD, low-carbon technology case study, looking at heat networks and smart grids.  The challenges are three-fold: incorporating social value in decision-making and business model development processes, which will require an holistic approach; aligning national policy to bring forward strategic infrastructure investment, which will require integration of infrastructure and low carbon objectives; and, policies, incentives and actors aligned to enable creation of strategic, local authority-led business models, which will require more power to core cities and local authorities.  Work is underway to explore the impact of policy measures on success of different models at various scales; and where is value created and appropriated, and how does this vary between scales.

In the discussion session, Ben Fine queried the extent to which social and cultural value can be fused with the economic; ideally, a method is required that does not resort to attempting to reduce everything to monetary values.  Seema Alim from Imperial College/CH2M Hill Inc. was interested in where project costings fitted in the value capture process.  Rupert Green highlighted the importance of governance structures in allowing projects to cross-subsidise where necessary; and, Kit England from Newcastle City Council stressed the importance of having access to the information necessary to make the business case.

The final speaker was Chris Zevenbergen, who described the latest thinking in the Netherlands on the protection of critical infrastructure from flooding.  The focus is on upgrading and integrating existing systems to improve resilience, rather than building new, stand-alone schemes.  The approach is two-tier: in the short-term carrying out low cost work with a big impact; while in the medium to longer term putting in place a gradual and continuous programme of resilience-based change.  The city of Dordrecht was given as an example of what can be achieved when this resilience-based approach to flood protection is adopted: all aspects of town planning are integrated into the flood defence plan, and in extreme events, although some flooding can be expected, the city is prepared.  Questions to Chris included: how best to convince the authorities that a particular low cost action is appropriate (normally a cost argument works well); Do you need an institution in place whose job it is to ‘worry’ about resilience (yes – in the Netherlands it is the Delta Commissioner); and, how do you persuade the general population to pay for flood protection (spread across the whole population of the Netherlands it amounts to a small tax surcharge, which most people don’t mind).

During the course of the day each delegate participated in three workshop sessions, aimed at particular aspects of the iBUILD research: infrastructure business model development; knowledge co-creation in the form of ‘decision theatre’; and scale and complexity.  The business model workshop took as its starting point a conceptual framework developed by the iBUILD team.  Participants were asked to try and identify gaps in the framework, or potential improvements, before trying to populate the framework with real world examples.  Feedback from the exercise suggested that the framework is a good starting point, but that it could do with being a bit simpler.  Having said that, it was felt that further work is required to explain in more detail that part of the process where the business model is created

The decision theatre workshop explored how the major shopping street in Newcastle might evolve and develop in the future from three perspectives: infrastructure and value; infrastructure, value and scale; and, future infrastructure collaborations.  Feedback highlighted the need to look at evolution from the perspectives of different stakeholders: particularly different age groups.  There was a feeling that the street was trying to be all things to all people and not really succeeding; the question was asked whether a ‘unique selling proposition’ was required.  And there was a suggestion that development ‘conversations’ should be people and environment-focused.

Finally the scale and complexity workshop investigated the interactions between local and national business models for energy, in preparation for more detailed modelling.  Feedback highlighted the presence of ‘diverse and fearsome constraints’ to scaling.  National and local regulations need to be aligned, and perhaps a duty on infrastructure stakeholders to co-operate would be helpful.

So, an excellent and productive day was had by all.  The next Stakeholder Day is scheduled for Wednesday 12th November 2014 in Leeds; however, rather than wait until then, the iBUILD team will be working to maintain an on-going, two-way dialogue between stakeholders and researchers.