The small-scale metal detecting survey recovered a small number of Roman coins as well as the coin of Henry VIII.

This is one of the Roman coins. The obverse (heads) shows the Emperor Constantine I. He was elevated to the imperial throne at Eburacum (York), became the first Christian Roman emperor and established Constantinople (Istanbul). The reverse shows the Genius of the Roman people (surrounded by the legend GENIO POP ROM). At the bottom of the coin (in the exergue) is a mintmark PLN, which tells us that the first (Prima) ‘workshop’ of the mint at Londinium (London) made this coin in the summer of AD307(RICVI (London), 88).

This coin could have been dropped by one of the villa’s inhabitants! 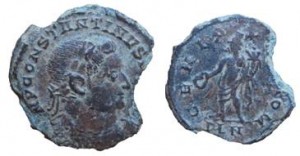