Like many scientists I find it a challenge to juggle time and energy so as to be an effective research worker, whilst simultaneously undertaking my responsibilities in teaching and (yawn) administration properly.  I’ve read numerous self-help books, of variable quality, many of which could be summed up by claiming that a clever filing system or the correct use of Post-It notes will solve everything.

Mark Reed’s new book, The Productive Researcher, is in a quite different order from these. 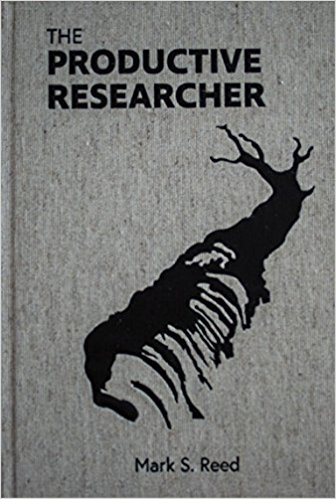 For a start, it is searingly honest.  He describes his own experience of panic attacks at public lectures, ‘impostor syndrome’, last-minute preparation of talks, mistakes made in chairing meetings and episodes of depression.  This honesty was deeply reassuring.  I can still remember having just become a lecturer when late one day I was suddenly asked if I could cover for another member of staff and teach their ecology lectures the following morning.  “Usual Lotka-Volterra competition and predation models” I was told, to which I replied  “Fine” without having a clue as to what L-V models were.  Went home with a couple of theoretical ecology textbooks and some blank acetates (pre-PowerPoint days): for some reason I hadn’t taken a theoretical population dynamics module as an undergraduate and hadn’t done any calculus since school, so spent much of the night getting to grips with both.  Bleary-eyed the following morning I gave the first lecture, pretending to be confident at an overhead projector in a big lecture theatre full of students.  The students didn’t seem to notice, but it was my first of now numerous episodes of “impostor syndrome”: on speaking to other academics I’ve realised the syndrome is common.

Mark Reed’s book is wide-ranging, and includes issues about examining what really motivates us in our research, how to achieve a good work-life balance, cope with rejections of grant applications or papers, avoid wasting time in meetings, and defeat the tyranny of emails (although on emails he omits my whizzo technique – see later).  His comments on work-life balance are pertinent.  It seems that the number of hours academics work per week in the UK is steadily increasing, with more than half doing over 50 hours per week.  I’ll admit that at the end of the day I’ll usually stuff a pile of papers into my bag with the intention to read them that evening ‘stay on top of the literature’, but somehow most of it doesn’t get read.  He provides evidence that longer hours don’t necessarily result in more productive researchers anyway.  The book covers ‘when to stop’: the analyses you’re doing, or paper you’re writing will never be perfect, so you need to know when it is good enough to consider complete and publish.  There’s a brilliant chapter on How to write a literature review in a week which ought to be compulsory reading for everyone.  He cheekily re-invents the tired management-speak of SMART objectives (Specific, Measureable, Achievable, Realistic, Timely) that are waffled about by administrators who have nothing better to do with their time, into something more valuable for researchers.  In Mark’s case they become goals that are Stretching, Motivational, Authentic, Relational and Tailored.  The chapter explaining these was much more valuable to me as a research scientist than the management-speak version.

Some of the most insightful parts of the book come from interviews Mark Reed has conducted with several of the top-performing most highly-rated university scientists internationally.  These scientists came from a wide-range of disciplines, including electronics, epidemiology, mathematics, environmental change, and some had published over 1000 papers, which had been cited hundreds (and even thousands) of times.  Clearly they are doing something right, and are worth listening to!  Despite the breadth of scientific disciplines encompassed by these highly-productive researchers certain common threads were apparent to both their philosophies and working patterns.  Despite their professional success they all came over as lacking in pride, indeed were relatively humble about what they had achieved, but could nevertheless be decisive when necessary.  They all emphasised the importance of listening (truly listening!) to others, irrespective of the status of the other scientist.  Their two main priorities were generally the supervision of PhD students, and second publishing in top journals.  They said it was important to allow other scientists to grow, to be a good collaborator, to not correct colleagues who repeatedly got trivial facts or figures wrong etc.  I thought the emphasis on PhD students was a good one, especially given the additional pressures PhD students face with the competition for papers, post-docs etc.  Most interviewees only worked during office hours, and not at home, therefore said it was important that every hour counted in the office (e.g. in 2 hour blocks).  Another good point was to do the exciting, motivationally interesting research first thing in the morning, and the boring, tedious administration later in the day when you’re tired.   All of them knew what their top priorities were, and could keep them focused in front of them at all times.

This is a short (176 pages), easy-to-read book that I would recommend to any scientist.  It is so full of nuggets of truth as to how to increase your productivity as a research scientist that it is difficult to take fully on-board in one reading (I’m in the process of re-reading it!).

Mark Reed discusses “The Tyranny of Email”, and although the book has lots of excellent suggestions on the subject, he doesn’t mention the little tricks I’ve stumbled across.  Until a few years ago I suffered under its tyranny, in that like most colleagues my Inbox contained between one to two thousand emails, in a confused muddled state, some read, some unread, some irrelevant, some urgent.  Now my Inbox usually contains only 10 to 20 emails, and most of the time it contains no emails whatsoever.  What’s the trick? (this is for Microsoft Outlook 2016):

The big advantage of the approach, only having ‘Action’, ‘Review’ and ‘Waiting’ mailboxes to think about is that it save so much time. Even my Action mailbox rarely has more than 10 to 15 emails in it.  When I re-check my Review mailbox about once a week, half the things have been dealt with by someone else already.  This seems to apply particularly to tedious administrative emails: academic administrators are very good at generating large numbers of duplicate emails tagged ‘high priority’ which actually are very low priority!  The Waiting mailbox provides a useful check on follow-ups, and if needed I can add a reminder to Outlook Tasks for a specific item.  I can still send emails whenever I want, and only receive new ones when I switch Outlook online.

I found the hardest part was switching from the old, disorganised system, to my current one.  “But what if someone needs to contact you urgently and you only check your incoming emails 2 or 3 times a day?” I hear you say.  Colleagues seem to phone or visit me in person, just as they did in pre-email days…