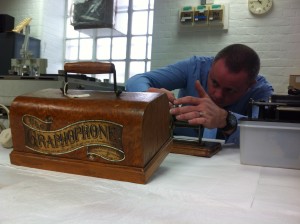 Dr Paul Fleet FHEA, FRSA is Director of Excellence in Learning and Teaching in the School of Arts and Cultures at Newcastle University and was recently granted an award under NISR’s Past in the Present theme.  Here he writes about the planning of the public facing workshops exploring recording technologies.

What does it mean to record something and commit its content to timelessness and what are the social, political and historical boundaries between public and private recordings?  These questions will be the focus of two workshops delivered by Newcastle University, Tyne & Wear Archives & Museums (TWAM) and the Lathe Revival and explored in hands-on workshops with various recording devices – from phonographs to mobile phones – by members of the public, academic staff and archivists.

The remarkable speed of development of such technologies has forced the public to consciously and subconsciously change their social and environmental listening behaviours.  One need only think of the recent stand by Kate Bush to have every audience member turn off their mobile phone during her concert to better engage with the experience as a community.

On 16 January 2015, John Coburn and Alex Boyd from TWAM, Lorna Fulton from @LatheRevival and I met to discuss the dates and details of these workshops.  So what can I tell you so far…  we will be looking at an original tin-foil phonograph and recording on an Edison wax cylinder phonograph that are currently housed within TWAM; we will be live cutting 78s on a 1930s Presto Lathe; we will be recording on a reel-to-reel that was made by the British Ferrograph Recorder Company of South Shields (North East); and we will be inviting the participants to explore their conscious and subconscious use of mobile phone audio capture.

The dates are to be confirmed but they will be in March 2015 so watch this space and search for #HearingHistory on Twitter for further details.