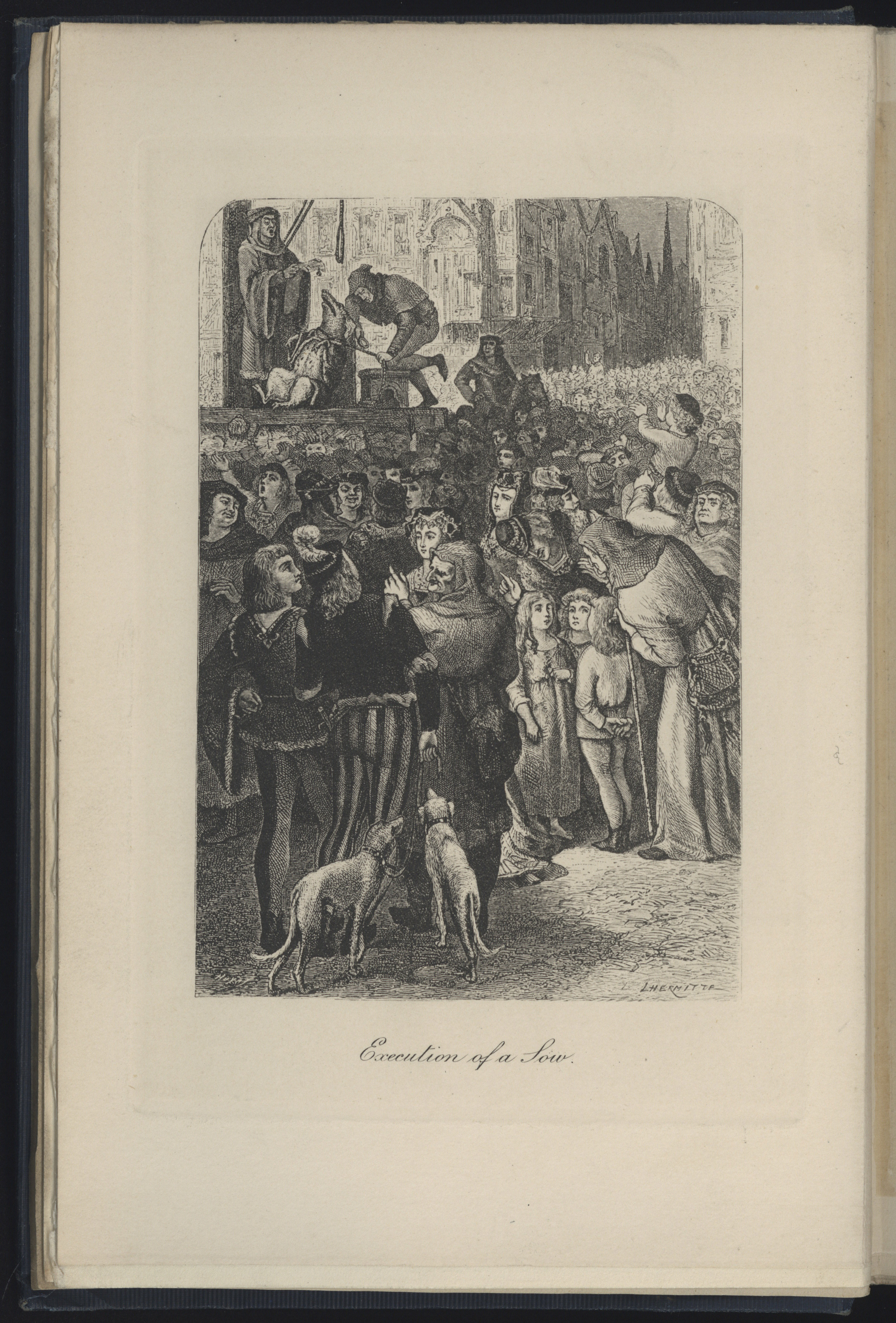 The Criminal Prosecution and Capital Punishment of Animals by E.P. Evans, 1906 (Clarke Miscellaneous 180)

From the Middle Ages until the mid-eighteenth century a wide array of animals were brought to trial in Europe, charged with a range of crimes committed against both humans and other animals. E.P. Evans’ book The Criminal Prosecution and Capital Punishment of Animals documents nearly 200 cases of animal trials from this period.

The frontispiece of Evans’ book shows a sow dressed in a jacket and trousers being executed in a public square. The pig had been charged with the murder of a small child and, following its execution, it was dressed up in human clothes to be displayed in the town.

Not all cases ended in capital punishment, however. Evans also documents cases where ecclesiastical trials of insects and vermin resulted in excommunication. For example, he writes about a case of rats who were defended by Bartholemew Chassenée – a renowned sixteenth century lawyer. The rats were accused of having ‘feloniously eaten up and wantonly destroying the barley-crop’ and Chassenée successfully defended the rats, who were unable to appear before the court due to the ‘length and difficulty of the journey and the serious perils which attended it’ – the ‘serious perils’ being the ‘vigilance of their mortal enemies, the cats’.

It wasn’t just animals who were subject to human law, however. Evans also writes of cases where inanimate objects were brought before the court. In one instance, a statue of a famous athlete, Nikôn of Thasos, had fallen and crushed a man. The statue was subsequently brought before a tribunal and sentenced to be ‘cast into the sea’.

While many of the cases Evans discusses may seem ridiculous to us, Medieval and early-Modern Europeans recognised that animals were capable of suffering pain and death. With contemporary movements like PETA and WWF working to establish animal rights, by granting animals agency in a court of justice, perhaps our Medieval and early-Modern predecessors were not too far wrong. 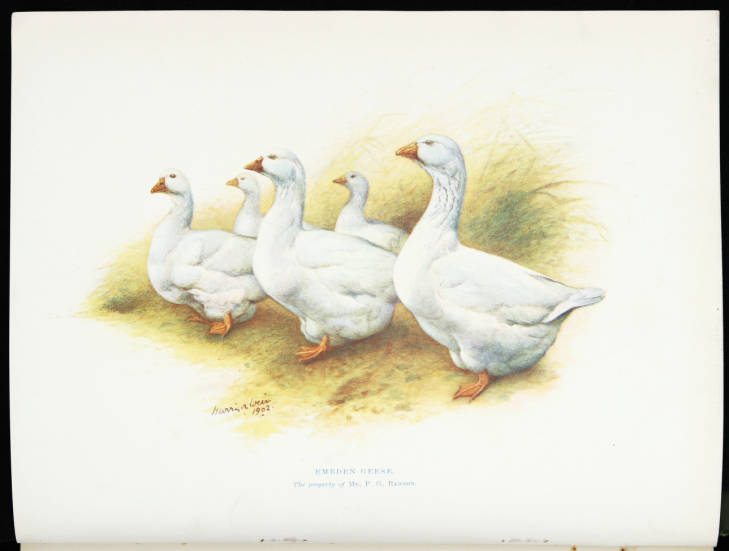 This very whimsical coloured plate of a gaggle of Emden geese, says ‘Property of Mr F G Rawson’ underneath.

Baron Georges Léopold Chrétien Frédéric Dagobert Cuvier (1769-1832) was a significant naturalist and zoologist. He compared living animals with fossils and thus helped to establish the fields of comparative anatomy and paleontology.

In the early Nineteenth Century he argued against prevailing early evolutionary theories that no species had become extinct because God’s creation was faultless.

He is remembered for having been a strong proponent of catastrophism – the theory that geological features and the history of animal life could be explained by catastrophic events that had caused the extinction of several species.

The Animal Kingdom, with the exception of ‘Insects’ is all his own work and represents the body of his research into the structure of living and fossilized animals. It became a classic text, translated many times and updated as knowledge increased.

The engraving depicts lemurs, classified as Quadrumana – the second order of Mammalians.