Ten years ago, the World Health Organization’s Commission on Social Determinants of Health released its final report.  The authors, led by Sir Michael Marmot, began by stating that the ‘unequal distribution of health-damaging experiences is not in any sense a ‘natural’ phenomenon but is the result of a toxic combination of poor social policies and programmes, unfair economic arrangements, and bad politics’.  The unsparing critique proceeded from there.  In a generally laudatory review, The Economist wondered whether the Commission was ‘baying at the moon’ when it attacked such ‘global imbalances’.

However, the financial crisis that was spreading across the world even as the report was released made it clear that the Commission’s analysis was spot-on.  Against that background Margaret Chan, then Director General of WHO, warned the United Nations General Assembly in October, 2008 that ‘[t]he policies governing the international systems that link us all so closely together …. need to be put to the true test. What impact do they have on poverty, misery, and ill health – in other words, the progress of a civilized world? Do they contribute to greater fairness in the distribution of benefits? Or are they leaving this world more and more out of balance, especially in matters of health?’  As was often the case, Dr. Chan was far ahead of the organisation she led – and as we know, in the decade of counterproductive austerity that followed, her advice was seldom heeded.

Ten years on, where are we?  In an article I have just published in Critical Public Health (if you don’t have access through your institution please e-mail me), I argue that – as in many other areas of global health policy and politics – the glass can be considered either half empty or half full.  Is the fate of the Commission’s report the tale of a sinking stone … 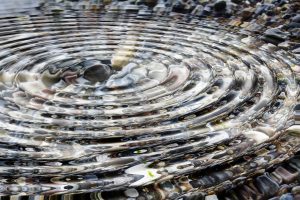 … or of promise yet unrealised?

On the one hand, the international community has now signed on to at least the rhetoric of the Sustainable Development Goals – a legacy of the World Commission on Environment and Development, which reported not ten years ago, but 31.  On the other hand, on most measures and in most contexts economic inequality is rising, and an expanding body of social science research suggests that the reductions in inequality that occurred in the twentieth century, in the context of two world wars that required mass mobilisation and a devastating depression, are an anomaly that is unlikely to be repeated.

As I point out in the article, references to ‘social determinants of health’ in the scientific literature are increasing in number.  A PubMed search turned up 75 references in 2008, rising steadily to 1042 in 2017.  Research ventures like the LIFEPATH consortium are expanding the already substantial evidence base for acting on social determinants of health.  Whether the strength of that evidence matters is ultimately a political issue; getting health equity and the corollary need for redistributive economic and social policies onto mainstream political agendas remains a formidable challenge, but perhaps not an insurmountable one.

The article was finalised before the remarkable primary victory of Democrat Ayanna Pressley in Massachusetts’ 7th District.  Here’s what she had to say about health equity in her ‘equity agenda’ (MBTA is the Massachusetts Bay Transport Authority):

‘Today, when you board the MBTA’s number 1 bus in Cambridge, it’s less than three miles to Dudley Station in Roxbury, but by the time you’ve made the 30-minute trip, the median household income in the neighborhoods around you have dropped by nearly $50,000 a year.[2]/[3] As the bus rolls through Back Bay, the average person around you might expect to live until he or she is 92 years old, but when it arrives in Roxbury, the average life expectancy has fallen by as much as 30 years.[4]  …. These types of disparities exist across the 7th District, and they are not naturally occurring; they are the legacy of decades of policies that have hardened systemic racism, increased income inequality, and advantaged the affluent’.

If the ‘social movement, based on evidence’ that Sir Michael and colleagues envisioned after the Commission’s report is to take shape – it hasn’t, yet – this is the kind of language we need to hear, from political actors and public health professionals alike.