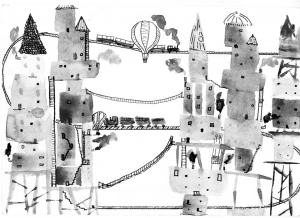 Illustration by Kasia Grzelak for the anthology Bridges

Out of all the bedtime stories, Dad told me, the one with the dragons was always the best.

‘Close your eyes. Can you see them? They are as tall as oak trees and wider than buses. Some can be dark grey, crimson, navy blue. Or sometimes they’re a mix of colors like white with silver or even purple with emerald.’

I gasped and opened one of my eyes to look at him, ‘I love purple and emerald!’

Dad smiled, ‘And once they spread their wings you better hold onto something, for the wind underneath them will knock you off your feet.’

‘I am. But still, flying airplanes is a completely different experience from riding dragons.’
I was about to ask him how he knew when Ali interrupted.

‘Again with the dragon story?’ Ali asked Dad as he came into the room to grab his tape player, ‘Aren’t you tired of it already?”

Dad and I rolled our eyes at him and giggled. It was like we had this secret just between the two of us and it didn’t matter if anybody else believed it. We did.

When the war broke out, all I could think about was how disappointed Dad would have been at the dragons. Still, it wasn’t the dragon’s fault, at least not all of it. The dragons were being controlled by an evil president, or so I heard Ali say. The evil president and his government had stolen treasures and sucked out the magic from their own land and were now coming to steal ours.

I asked Mom why they were doing it, and she answered, ‘They’re blinded by desire, and are selfish to the consequences that their greed brings onto others.’

‘Some people get caught up in their emptiness and try to fill it with anything,’ she picked up my story book and placed it on the nightstand, ‘Even if it means harming others and themselves in the long run.’

I laid down and looked up at the ceiling. I already knew the answer but still asked, ‘Do we really have to go?’

I heard mom take a deep breath, ‘Yes, sweetheart. We have to.’

I threw my arms up, ‘Why doesn’t anybody stop them? I don’t want to leave. This is my home; all my friends are here. And besides, not everyone’s leaving.’

‘But the knights are fighting them!’ I interrupted her, ‘They can protect us! Like Da-’

‘Uri, that’s enough with the knights!’ Mom snapped, voice dropping low and deep, I sank down a bit, ‘I already told you, we’re leaving. That’s that.’

I rolled my eyes but didn’t say anything. I could feel my lips trembling, so I turned around, my back facing her.

I heard her sigh, ‘I’m sorry for shouting.’

Mom leaned in and kissed the top of my head, ‘Sleep tight, sweetheart,’ she stood up and left, closing the door behind her.

Paula Lola Chaves was born in Puerto Rico. She studied at Hogwarts, travelled to Middle Earth, flew to Asteroid 325, and walked through the Wardrobe. This has inspired her to create her own adventures, characters, and worlds. She has a Bachelor’s degree in Teaching English as a Second Language with the use of Multimedia Technology, and a Master’s degree in Creative Writing at Newcastle University.This is an extract from a short story published in the students’ anthology Bridges.