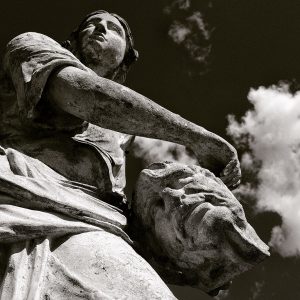 To be able to successfully get rid of a body, first, you need a body. Luckily for her, Margaret already had one. Her ex lay on the bathroom floor in front of her, blood slowly pooling around him. It hadn’t yet congealed and, as such, was a striking red colour. It was actually a rather beautiful colour Margaret thought as she stood watching him, the red oozing out over the white tiles.

Margaret was transfixed; it’s not every day you get to stand over a dead body and watch the lifeblood slowly leak out of it. This was the first dead person she’d ever seen, and it was rather a dramatic entrance into the world of death.

Anyway, this all meant that Margaret had a body she could dispose of. In order to do this, she got out a flowery pad of paper and a ballpoint pen. She listed what she couldn’t do because it was a lot easier than trying to work out what she could do. Margaret hoped that the process of elimination would throw some light on the problem.

She couldn’t drive him out somewhere and dump the body because a) someone might find it, and b) she didn’t have a car. She couldn’t bury him in the garden because a mound of earth would be a) suspicious, and b) her friend had once said that satellites pick up human-sized holes in the earth and extrapolate from that that there is a human hidden there. That would prove difficult to explain. Margaret started to worry. The list of things that she couldn’t do kept growing and the suggestion of actions to take remained blank.

In the end, she had to leave the room. The bathroom door was studiously shut behind her and with that out of sight (impossible to be out of mind), she got dressed and ready as she would on any normal day.

Downstairs she got out her Weetabix and her pad of paper and started trying to think. The problem was that she had now used up her one good idea. Although she knew that she should be in mourning and thus starving herself, it helped to eat. She had four more Weetabix.

After her abnormally large breakfast, she took a bucket of water up to the bathroom. Finally, with both that and the flush managed to get rid of the fingers of her ex’s right hand.

Margaret was all out of ideas, yet now that she’d started mutilating her ex’s body, she had to finish the job. If she’d then called the police, she really would have been in trouble.

By lunchtime she’d shaved her ex’s head and body and removed his nails; she’d heard that these were the hardest part of a person to destroy. Although she hadn’t gotten rid of any more of his body, at least she’d achieved something. She ate Ben and Jerrys from the tub as a reward. It turned out that TV wasn’t realistic when showing how to dispose of bodies and this wasn’t helpful. Margaret hadn’t realised how heavy a body would be. Or how awkward cities, which were full of people, were. People who didn’t go to sleep. People who talked. People who made dragging a body outside and then dumping somewhere difficult.

Margaret wished that she lived in the country. Or that she could rewind the past 24 hours. Unfortunately, neither of those were real options. Eating Ben and Jerrys and ignoring the problem was, however, an option. So she did that. She finished the ice-cream, took the bins out, went to the corner shop to pick up some milk, played with a stray cat on the way, called her friend, read the news, made tea, ate an entire packet of bourbon biscuits. Maybe she’d deal with the body the next day. She had a Netflix series to watch and an essay to write. So that’s what she did.

Anne Gill is on the MA Writing Poetry course. Her poetry has featured in Strix, The Dizziness of Freedom Anthology, and others. She is as a member of the Second City Poets. Their first show, Playgrounds, is featuring at the Verve Poetry Festival. She is a poetry submissions reader at Bare Fiction. Her first pamphlet Raft is out now, published by Bad Betty Press.