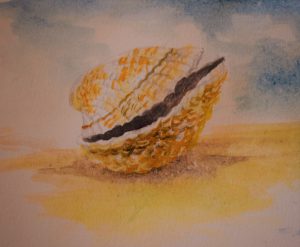 A Tangible Beauty of Absence

She saw the shell, there, on the sand, on a still autumn day when the calm lapping sea melded into the sky at its horizon.

This was the first walk of autumn and it had taken some cajoling to persuade the teenagers to leave the cottage. They had grumbled and straggled behind until they breathed fresh sea air on turning the corner at the top of the hill. Then their long strides easily overtook her and suddenly she was alone. Forgotten in the moment, as they linked arms, engrossed in themselves and each other.

She bent down and picked it up. At first it appeared sealed and she thought that the occupant may be dead within but she looked more closely. It was open a sliver and she saw and smelt that it was empty. Left home, gone fishing, just popped out. Such a clean salty exit.

The children were play wrestling ahead. The man-boy and his sister, almost as tall as each other. A tangle of limbs and wind-carried laughter.

Over years and seasons, over notches on the kitchen door jamb they had taken this walk. At first within and then carried, later with uncertainty, holding her hand. For years, running on and back, on and back, zigzagging over the beach, hunting, scouring for treasure. Dog shark egg purses, feathers, jellyfish, crab shells, animal tracks, clean washed bones, sea glass and shells. So many shells; limpet, cowrie, cockle, whelk and top shell, lots of top shells because they twinkle silver in the sunlight. All excitedly gifted to her until her pockets could contain no more.

This one was a cockle and she popped it into her pocket. With her finger tips she felt the sea smoothed ridges on either side, felt its coolness, the weight of its emptiness. Within her pocket her fingers scooped it to fit the hollow of her palm. The creature’s lifetime artistry. This accumulation of such magnitude, left behind.

A few grains of sand trickled from it and became lost in the dark seam of her pocket.

Sue Pearson is a current MA Creative Writing student having stepped away from a career in law. She began writing 2 years ago and enjoys creating short stories. Through the MA she has also had the opportunity to explore writing for children and young adults and creating poetry. She is currently working on a young adult novel, a collection of short stories and some poems. She lives in Newcastle with her husband and two children. This is her first publication and her ambition is to have more.