Here Professor Alison Stenning explains how cuts to parks and other civic budgets are creating deep inequalities in the availability of safe ‘play space’ for children across the UK.

The critical importance of play, for children and adults, is so widely recognised that we need hardly to make an argument for it. Yet, in times of austerity and of deep cuts to local authority and third sector budgets, it seems that this case does, once again, need to be made.

Barely a week goes by without an academic, commentator, activist, politician or policy maker passionately promoting the benefits of play for physical and mental health, for child development, and for community. Yet perhaps the most important argument of all is to protect play for its intrinsic value – to children and adults – as a space of joy, connection, exploration, challenge, freedom and openness. These values seem all the more important in the context of an austere environment that more often closes down worlds than opens them up. 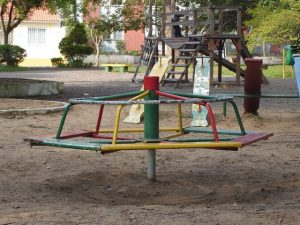 “over 400 local authority playgrounds have been closed since 2010, with at least one third of all local authorities making cuts to their play provision”

[Image description: image shows a children’s playground roundabout in the middle of an empty park]

The deep and widespread cuts to play services, play parks, and adventure playgrounds have been widely documented. The Association of Play Industries reports that over 400 local authority playgrounds have been closed since 2010, with at least one third of all local authorities making cuts to their play provision. Adventure playgrounds – which often serve poorer communities and are staffed by trained play and youth workers who support and care for children and young people in myriad ways – have been especially hard-hit as their facilities and staff are seen as particularly costly. A local, north-east example can be seen at Clasper Towers in Teams, Gateshead, a playground only opened in 2010 but now depicted in a series of forlorn images of fenced-off play equipment. As Gateshead council explained: “Clasper Towers adventure playground closed some years ago as it had gradually become dangerous for children to use and there were no funds to either repair or maintain it. It has been mothballed ever since.”

In some communities, play sites have been sold off to commercial providers (such as GoApe) and converted to private facilities which charge for entry and rarely employ professional playworkers. In other places, mirroring practices across a range of civic sectors, facilities have been kept open but with much reduced hours, opening just for a few hours on certain days (Woolley 2015).

Even in instances where facilities haven’t been closed, cuts in other spheres have impacted on the accessibility of spaces for play. For example, cuts to police and wider community safety activities can mean that play spaces no longer feel secure, especially for younger children. And the decline of local authority maintenance services and rubbish collections can mean that play parks and other green spaces are increasingly dirty and potentially dangerous.

What is more, the increasing pressures on family life, including on budgets and time, but also rising weariness and hunger, and even malnutrition, amongst children and their families can mean that even when play spaces remain and are maintained, it’s increasingly difficult for some families to access them.

And, in all sorts of different ways, austerity and the longer-term effects of neoliberalism have also impacted the provision of play in all sorts of other public spaces – in children’s centres, in schools and after-school clubs, in third-sector provision in community centres, and elsewhere.

Not surprisingly, “[c]hildren’s access to play space is not equal; it’s the deprived areas that are hit the hardest by cuts in public play provision and the ones that will suffer the most”. These inequalities have been documented, in real detail, from the start of austerity (see 2015 special issue on Play in Times of Austerity, including the significant differences in experience in England in contrast to Wales and Scotland.

Of course, communities and play activists haven’t taken this all lying down. There is widespread evidence of groups of parents, for example, establishing campaigns to defend and resurrect threatened play spaces. For example, a recent campaign has secured an impressive future for one of the playgrounds of my own childhood in Hertford, raising £26,000 in just five weeks. This is an extraordinary achievement, but we must ask how replicable this would be in the hundreds of poorer communities whose play spaces are also under threat. The BBC drew attention to the loss of a community playground in Dalton-in-Furness in Cumbria – the swings were literally removed in front of children’s eyes – and the start of a parents’ campaign to raise £60,000 for a small playground that was there just weeks ago.

In other ways, communities have come together to forge spaces for play on their streets and in their neighbourhoods, in ways that require little funding and little support from local authorities. The playing out movement is at the heart of this, where residents take the lead to close their streets to traffic to enable children to play freely and safely, at minimal cost, on their doorsteps. Others have, for example, ‘adopted’ local parks to secure them for children to play.

There is a danger, of course, that all these initiatives let the government and local authorities off the hook. But they can also be seen as radical interventions which seek to shift the debate around play and its essential value in the lives of children, their families and their communities, which refuse to accept the loss of these critical spaces in our villages, towns and cities, and which insist on the presence of playful spaces in the wider context of loss, impoverishment, declining horizons and closure.