The Lord Dearing Lifetime Achievement Award prompted me to look back to his 1997 report and reflect on where the sector is now in terms of one of his chapters- the local and regional role of HE. 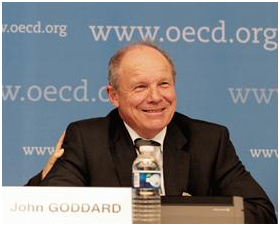 As evidence to the Dearing review, the CVCP (the precursor to UUK) asked the Centre for Urban and Regional Development Studies at Newcastle University to undertake a review entitled ‘Universities and Communities’ based on submissions we received from most universities. Drawing on this and other evidence Dearing noted that “HE is now a significant force in regional economies as a source of income and employment, a contribution to cultural life and in supporting regional and local economic development… As part of the compact we envisage between HE and society each institution should be clear about its mission in relation to local communities and regions”. Dearing clearly recognised that this ‘compact’ was wide ranging, had a strong local dimension and was one where the university’s contribution to ‘the economy’ could not be separated from the wider society in which it is embedded.

Some of what Dearing recommended has to come to pass in the ensuing decade. Universities came to play a key role in the regional governance architecture of England. Through regional associations universities from different mission groups worked together with RDA and HEFCE support to respond to regional needs and opportunities – for example combined efforts through Aim Higher to deliver widening participation in HE. Joint working not only with RDAs but other public bodies like regional local authority associations and the regional Arts Councils recognised mutual interests and the fact that the regional impact of universities was maximised when the knowledge supply and demand sides were operating in tandem across a broad front.

Much of this regional architecture, including most of the regional associations of universities, has now been dismantled to be replaced by a new emphasis on localism and a singular focus on the contribution of universities to the economy nationally and locally. For example HEFCE has just invited bids to its Catalyst Fund for projects “to enhance the economic anchor role of universities and colleges within their localities”. 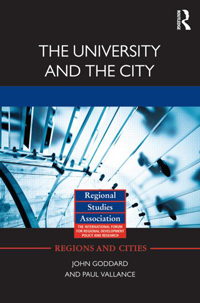 Most universities in England are located in a city. In our new book The University and the City, Paul Vallance and I demonstrate that universities are much more than economic actors. Location in cities means that universities must perforce have relationships with other institutions that inhabit the city and play a role in its physical, social and well as cultural development. Urban location also raises normative questions for academic practise – how to be of relevance to the place in which the practitioners live and work as citizens. The public good question frequently raised by Chris Brink, Vice Chancellor of Newcastle University of not only what are universities ‘good at’ in terms of research and teaching but also what are they ‘good for’ has real resonance at the city level. In response to this question, we see individual academics and whole institutions like UCL and Newcastle viewing the city as a ‘living laboratory’ as they respond to such global challenges as sustainable development, an ageing population and inter-cultural interaction, challenges which also have a local dimension.

Significantly these grand challenges also provide business opportunities – for example in the development of technologies and services delivery innovations to enable older people to remain in their homes.

We argue that there are strong incentives for universities to strengthen partnerships with local civil society in order to deliver widening participation, to enhance the student experience and employment outcomes and to demonstrate the impact of research. Likewise local authorities and Local Enterprise Partnerships with tight budgets will need to look to universities in their area as key actors able to connect the global and the local across a broad front. Indeed, those universities like my own that fulfil this civic role will be truly anchor institutions in the broadest sense of the word.

John Goddard is Emeritus Professor of Regional Development Studies and formerly Deputy VC at Newcastle University. His book with Paul Vallance on The University and the City was published by Routledge on 31st January.