Our Theatre Royal Playbills (RB 792 (4282) – NEW) feature many notices for performances of Shakespeare at the old Theatre Royal on Mosley Street between 1770 and 1820, including this one by a Georgian/Victorian theatre sensation and her two sisters. 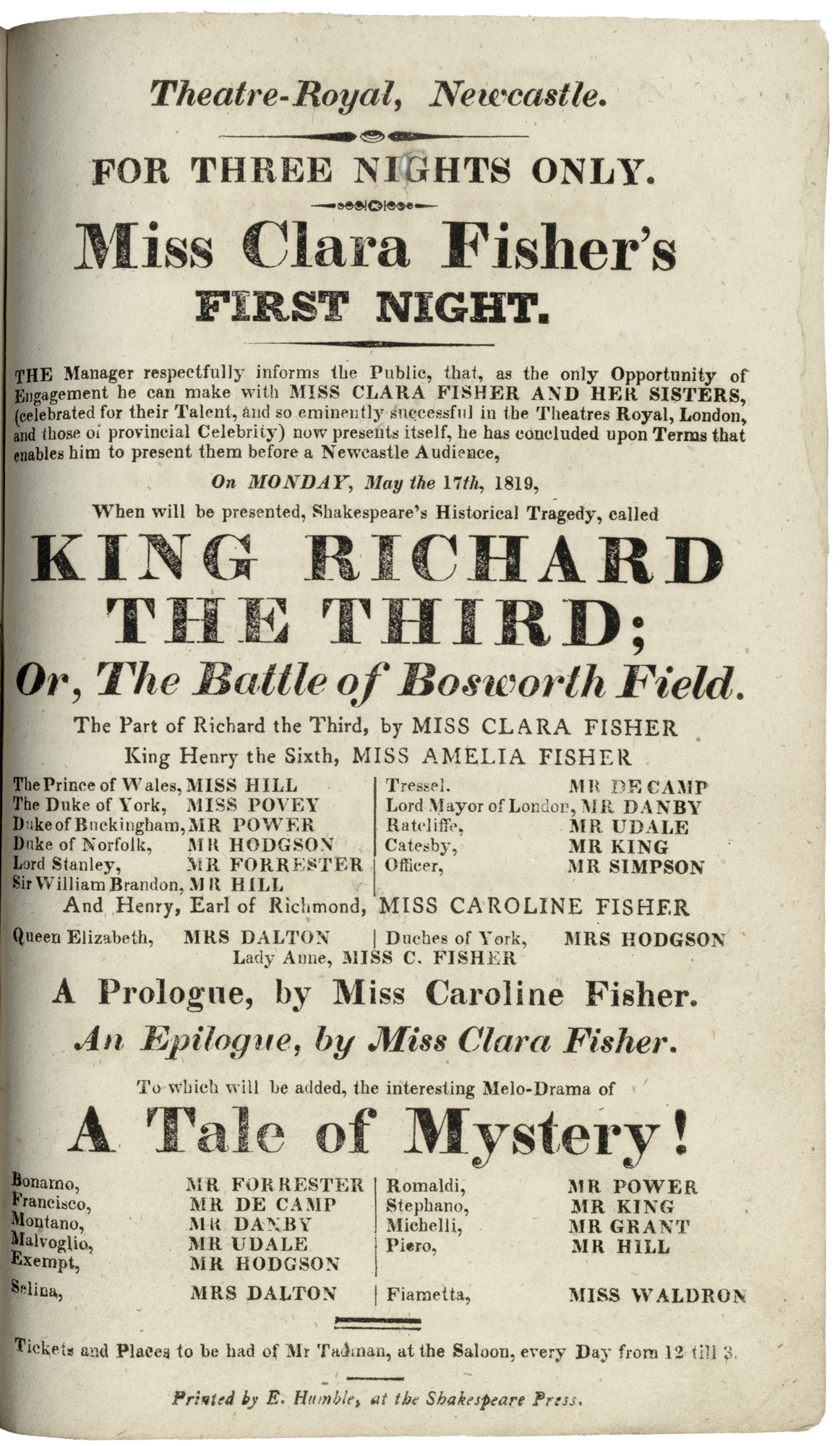 Clara Fisher (b.14 July 1811, London, died 12 November 1898, Jersey, U.S.) was an Anglo-American actress who inspired an enormous following in the United States. She made her stage debut in 1817, at the age of six, in a children’s adaptation of David Garrick’s Lilliput at the Drury Lane Theatre in London. Her performance in that and in excerpts from Richard III captivated the audience. She then began a 10-year period of touring up and down Great Britain, winning popular acclaim in a variety of child’s and adult’s roles.

By the time she and her sisters Amelia and Caroline started their three-night engagement at the Newcastle Theatre Royal on 17 May 1819, Clara would have been only seven years old. On the opening night, she played the leading role in  ‘Shakespeare’s Historical Tragedy, called KING RICHARD THE THIRD; Or, The Battle of Bosworth Field. Clara was known for her ‘breeches parts’ (men’s roles), including Hamlet on at least one occasion. At the Theatre Royal, her sister Amelia was Henry VI, and Henry, Earl of Richmond, was played by Caroline Fisher.

On the second night, she played Shylock in The Merchant of Venice, and then, on a lighter note, performed ‘A COMIC SONG. (IN CHARACTER)’.

The third, and supposedly final, night was Shakespeare-free.

Such was the success of the Fisher girls’ engagement that they were held over for an extra performance on Friday 21 May, 1819, performing ‘some of the best scenes from the most popular Plays . . .’. This included acts four and five of King Richard the Third, with the sisters reprising their ‘breeches parts’ of the previous Monday.

Fisher went to the United States in 1827 and made her debut in New York City that same year. She was a sensation – her name was given to babies, racehorses, stagecoaches, and steamboats – and she was regarded as America’s leading stage actress. Her last performance was in Baltimore, Maryland, in 1889.

This performance, and about 240 others, is promoted by notices in one volume of our Theatre Royal Playbills collection, a bound collection of ‘posters’ for the ‘old’ Newcastle Theatre Royal in Mosley Street. The bills were printed in 1819 and 1820, and are typical of the early nineteenth century –  i.e. very small compared to the modern-day concept of ‘posters’ –  and utilising revolutionary display typefaces which had begun to be manufactured in about 1810 for advertising.

Fittingly, the bill was printed by Edward Humble, at the Shakespeare Press. Humble was a respected local printer, and a proprietor of the County Durham Advertiser.

# You can place your order by linking to our request form. The reference code and title will be RB 792 (4282) – NEW – Theatre Royal Playbills.’