On 30th June, 1859, Jean François Gravelet made his name as ‘Chevalier Blondin’ when he became the first person to walk across the Niagara Gorge on a tightrope suspended 160 feet (50 metres) above the water, watched by 10,000 people. This impressive yet foolhardy feat is one that he would go on to perform 17 times, each time becoming more daring. 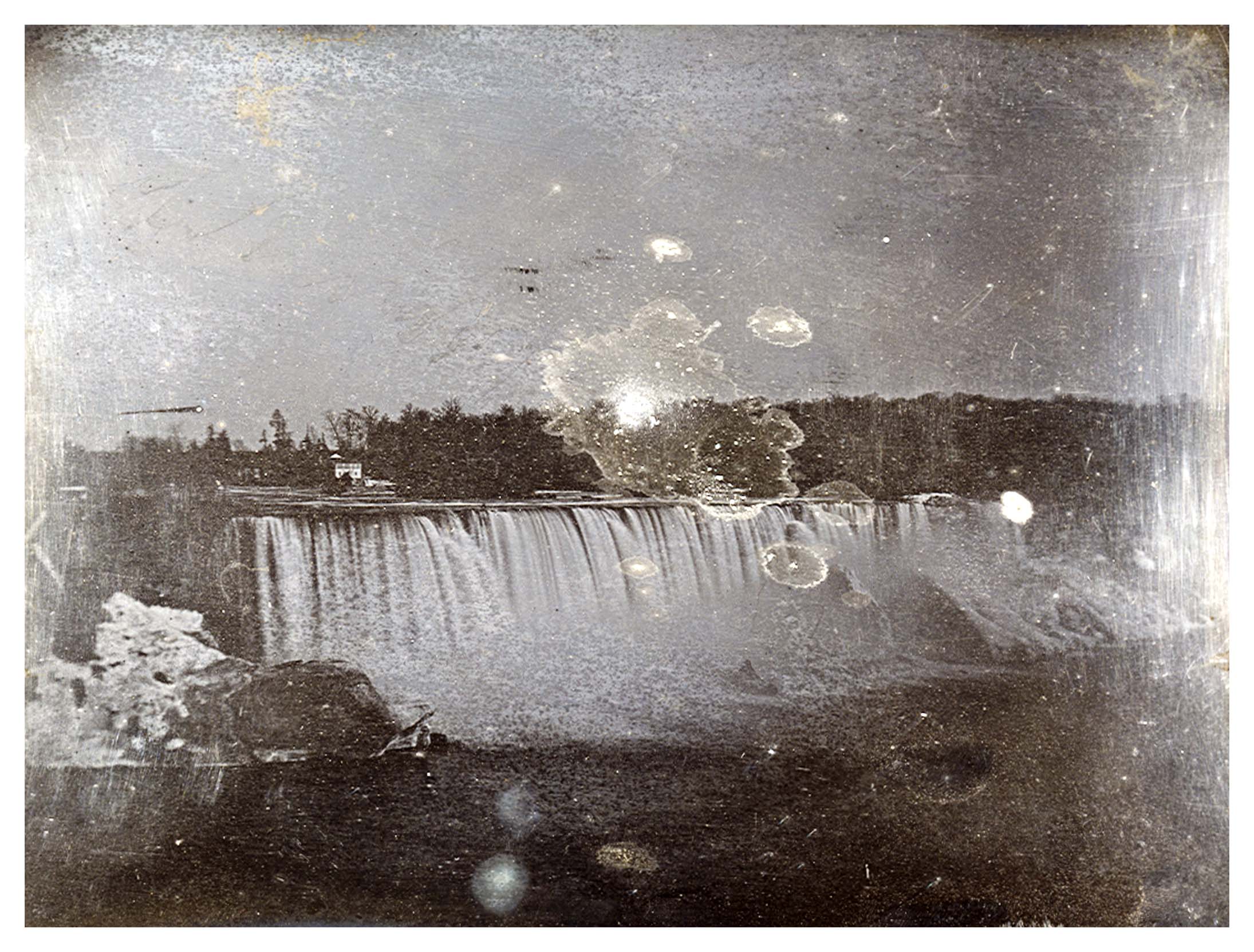 Blondin’s career began at just six years old when he was sent to the École de Gymnase in Lyon and performed, from age nine, under the name ‘The Little Wonder’. Later, he would take the name ‘Blondin’ from the owner of the circus, owing to his fair hair and skin. Travelling with the Ravel family of acrobats he toured in Europe before arriving in the USA and appeared in New York, in Barnum’s Greatest Show on Earth. It was a visit to Niagara as a tourist that gave him the ambition to cross the waters and his exploit made him a sensation. Capitalising on his new-found fame he toured Europe during the winter of 1859-60.

He made his first UK appearance on Saturday 1st June, 1861, at the Crystal Palace, dressed in a light-coloured, tight-fitting costume that was ornamented with beads and a large cap bedecked with a plume of ostrich feathers.  This time, his rope stretched the whole length of the central transept, 180 feet (55 metres) above the concrete floor. He used a balance pole that was 28 feet (8.5 metres) long and weighed 60 pounds (27 kilograms). The incline on which he made his descent was about 1 in 15 and Blondin looked a bit shaky at first. Soon, he gained confidence and practically ran across the rope only to retrace his steps, backwards. He held a series of elegant poses and turned various somersaults, sat sideways and then astride the rope, rising on one leg. The Illustrated London News reported that at one point he was blindfolded and had a bag put over his head that reached down to his knees. On attempting to walk the tightrope his left foot slipped after a few paces. He recovered his balance. Then, his right foot slipped and there was great apprehension in the crowd but this was nothing more than “feints” to build up dramatic tension. At the end of the show “the universal verdict was that the performance was the most extraordinary and exciting of the kind that had ever been witnessed in London”. 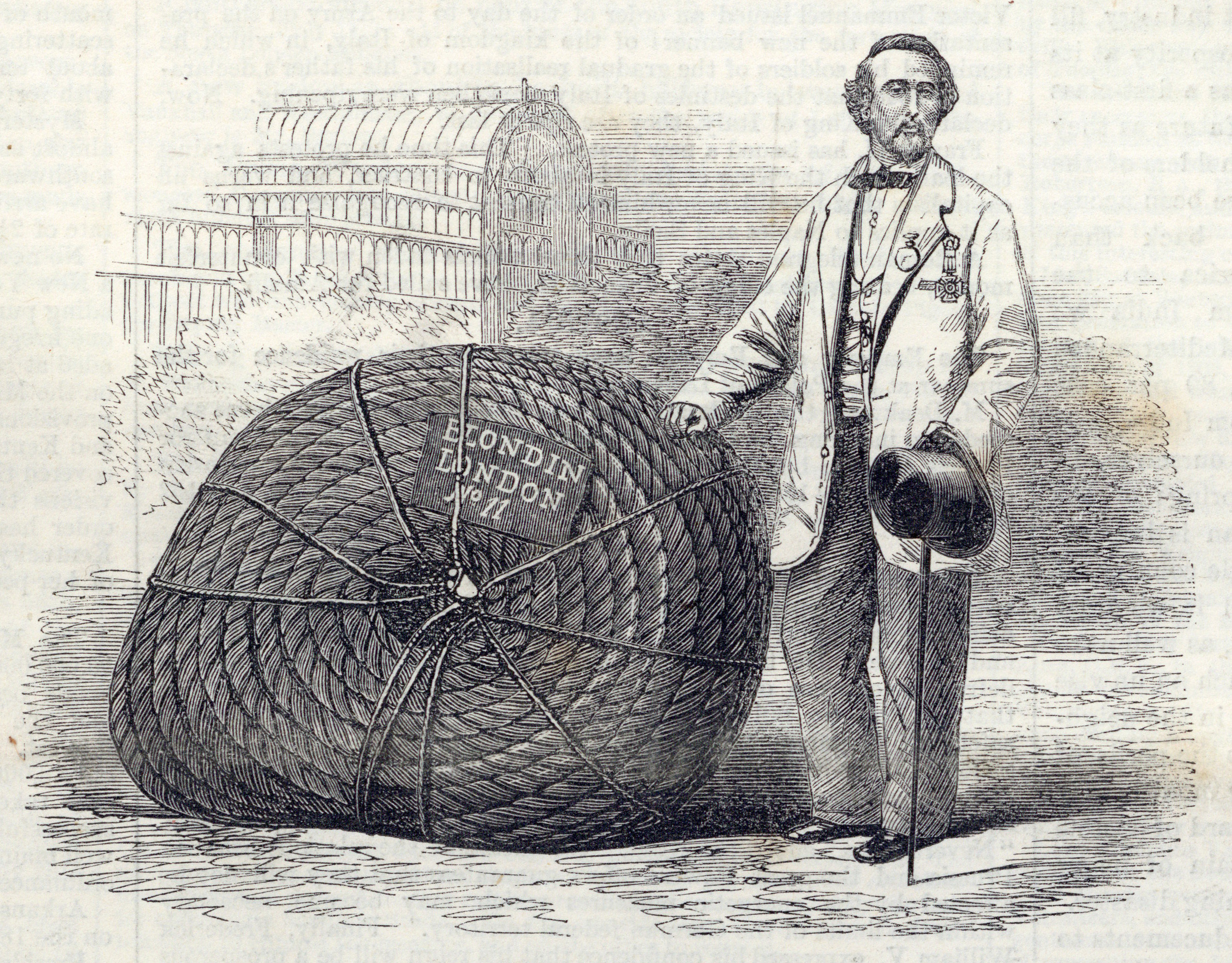 Blondin and the rope he needed for performances at the Crystal Palace from: Illustrated London News, June 8, 1861

By this time, Blondin was handsomely paid and guaranteed to draw audiences (half-expectant of imminent accident or death). He was paid £1,200 for 12 performances at the Crystal Palace – roughly speaking, £52,000 in today’s spending worth. 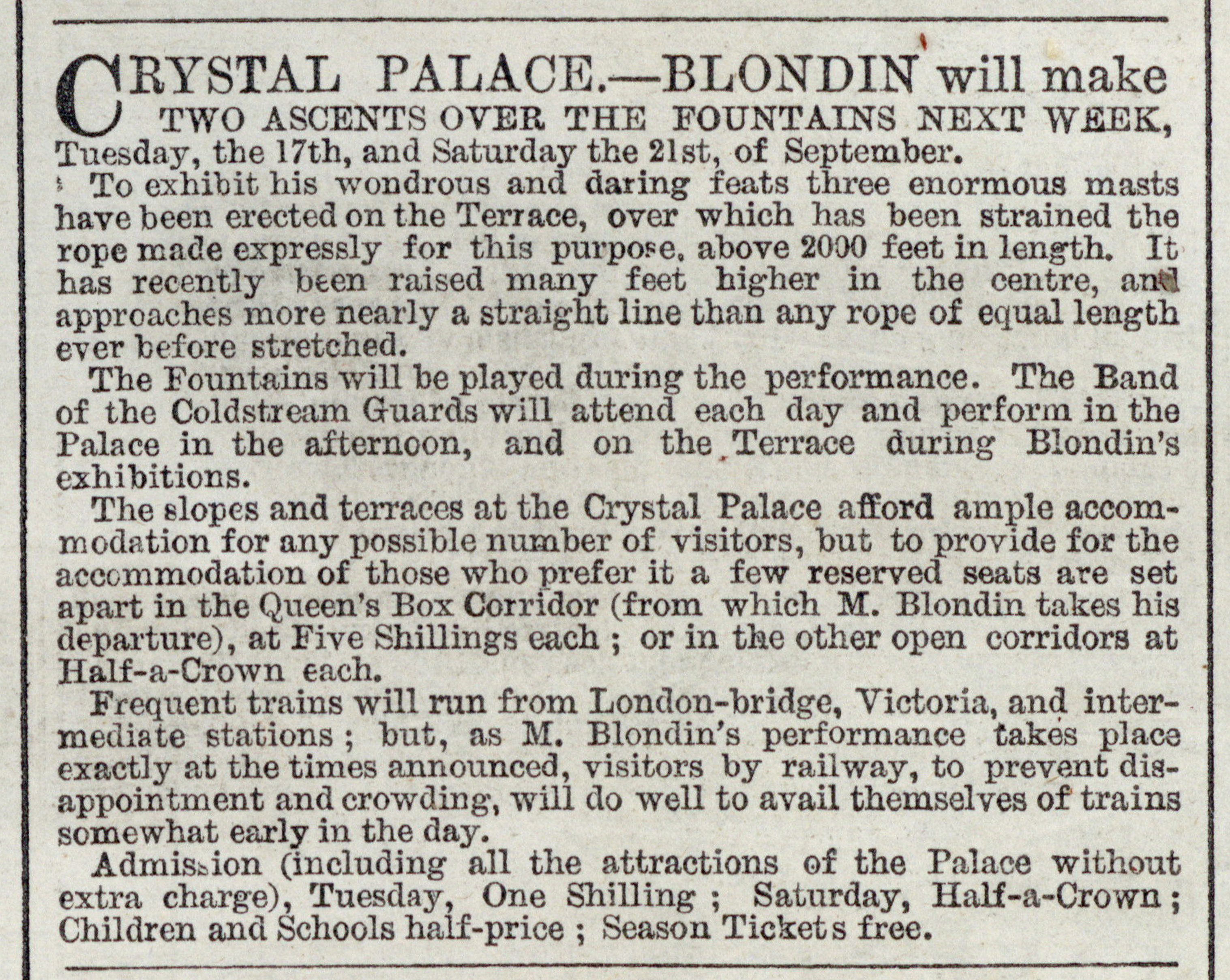 Advertisement for Blondin’s shows at the Crystal Palace from: Illustrated London News, September 14, 1861

He went on to tour in the UK and continued to perform until his death (at home, in bed), aged 72.

Blondin was emulated by other funambulists: ‘The Great Farini’ carried a washerwoman along a tightrope across Niagara Falls in 1860; Maria Spelterini was the first woman to walk a tightrope across the gorge, in 1876; some others sadly died in their attempts. In August 1860, Selina Young, walked along a 600 metre- (1968 feet-) long tightrope above the River Thames, from Battersea to Cremorne. Selina was dubbed ‘The Female Blondin’. 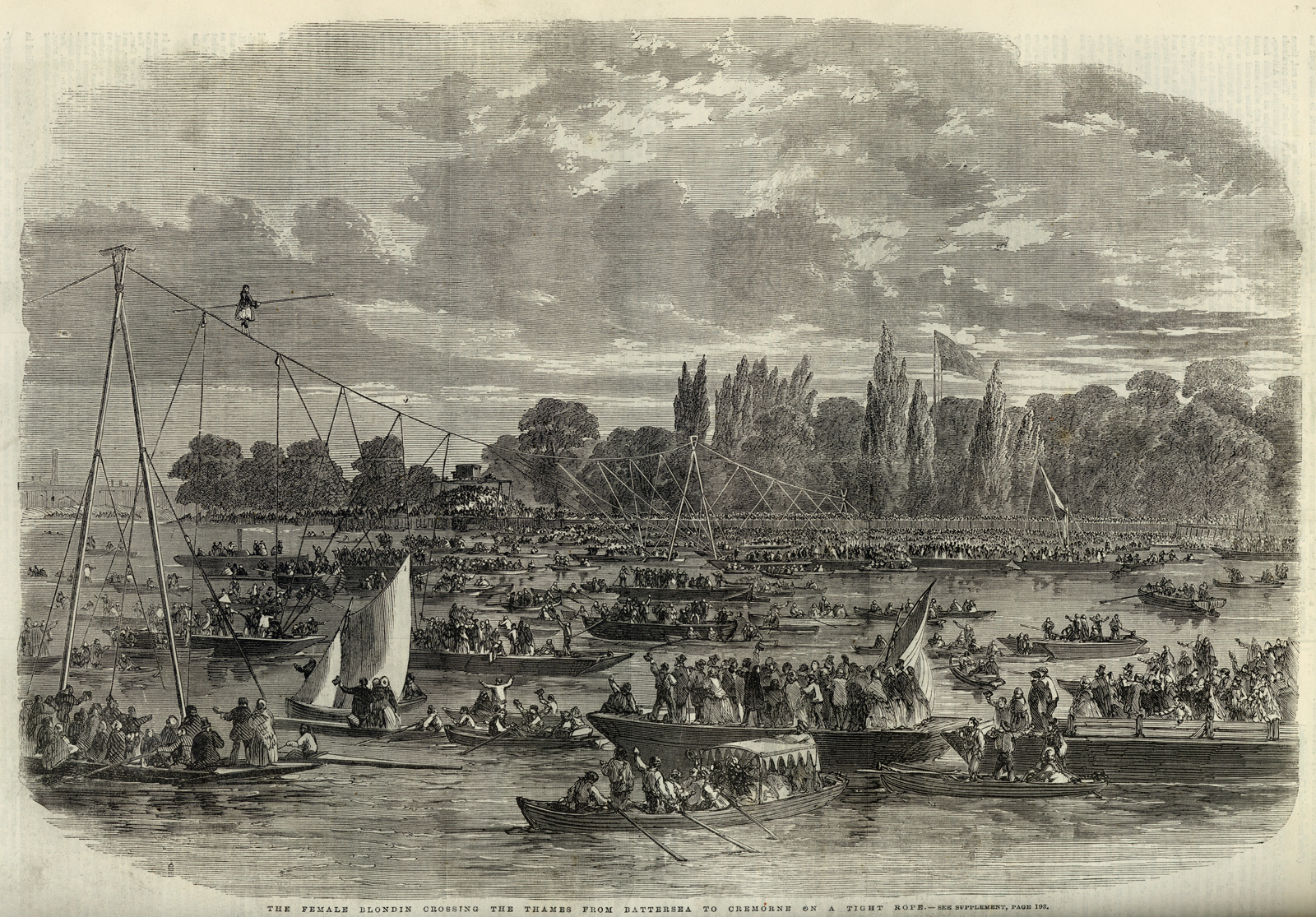 The Female Blondin crossing the Thames from Battersea to Cremorne on a tight rope from: Illustrated London News, August 24, 1861

# Images seen within this blog are held within Illustrated London News as part of the 19th Century Collection with reference code 19TH C. Coll 030 ILL

# You can place your order by linking to our request form. The reference code and title will be 19th C. Coll 030 ILL – Illustrated London News (followed by a volume number)