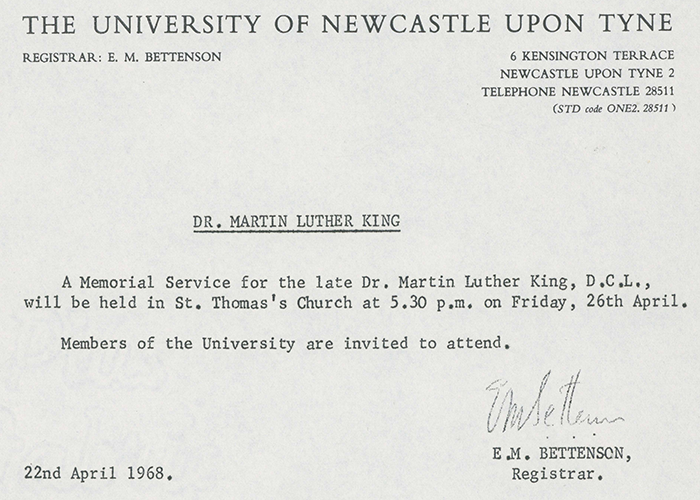 April 2018 marked the 50th anniversary of the assassination of the civil rights campaigner, Dr. Martin Luther King Jr. Shortly after 6pm on 4th April 1968, King was short dead in Memphis, Tennessee. He was just 39 years old. Following the news of King’s assassination, Newcastle University Registrar, Ernest Bettenson announced that the University “deeply deplored” the killing and “we are flying our flag at half-mast to show our deepest regret and sympathy for Dr. King’s family…” (‘City Students Pay Tribute to Dr. King,’ E-Chronicle, April 5, 1968, p.1).

The world was shocked and press quickly took to reporting the hunt for King’s killer. The press in Newcastle also joined the rest of the nation through extensive coverage of the murder, the riots that then ensued in the United States and the hunt for King’s killer. Two months after King’s assassination, on 8th June 1968, James Earl Ray was arrested in London, which later led to his trial and conviction.

Just five months prior to his assassination, on 13th November 1967, King made a fleeting visit to Newcastle. Staying just seven hours in the City, to receive an Honorary Doctorate in Civil Law from the University (the only University to do so during his lifetime) and delivered a powerful, impromptu speech. King spoke about many challenges that still remain with us today. He linked the African American freedom struggle to developments in contemporary British race relations and issued a call for people to confront global challenges of war, poverty and racism. This would be his last public address outside the US before his assassination. You can read the full details of the day of King’s visit to Newcastle University in this digital exhibition. 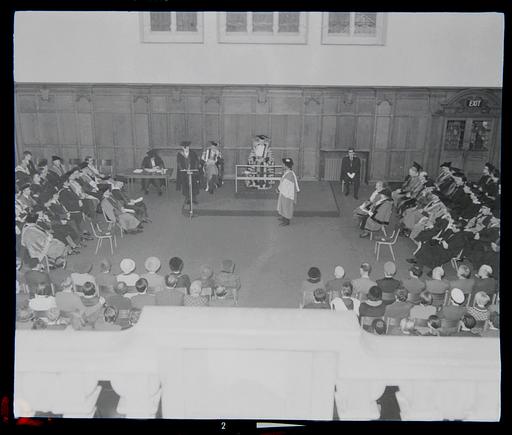 To remember Martin Luther King, Newcastle University organised a Memorial Service to honour King’s visit and curate his lasting legacy. On 26th April 1968, Vice Chancellor Charles Bosanquet delivered this Service and gave a moving eulogy for staff and students at St. Thomas’ Church, Haymarket in Newcastle. Bosanquet spoke of King’s visit to the University. He personally expressed the experience he had when King arrived, where they spoke about King’s beliefs and policies surrounding radical equality, poverty, the war in Vietnam and the situation in Britain. King told Bosanquet that “we should bestir ourselves to ensure early and full acceptance of coloured people in Britain as equal citizens”. 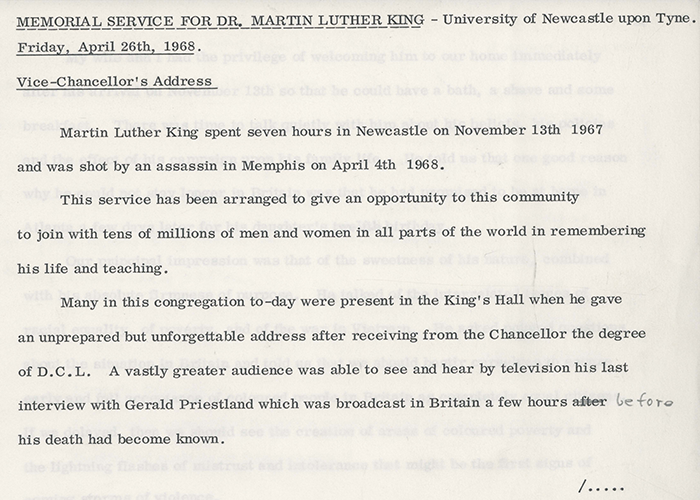 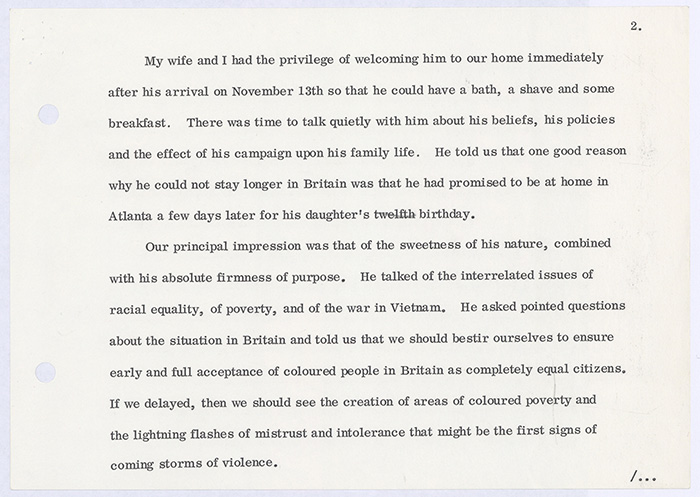 The University went on to remember his legacy through a series of events, including Martin Luther King Memorial Lectures, the first delivered on 12th October 1972, when Trevor Huddleston (Bishop of Stepney) spoke on ‘Race Relations in a Hungry World’, as well memorial conferences and the unveiling of Dr. Martin Luther King’s statue in the King’s Quad to celebrate the 50th anniversary of his visit to the University.

On 26th April 2018, St. Thomas’ Church is holding a Memorial Service to honour Dr. Martin Luther King, 50 years to the day that the 1968 Service took place.