The Supergen COP26 Fishbowl was a public engagement activity in which participants from different groups, organisations, and backgrounds discussed their visions for an energy future with net-zero carbon emissions. It took place at the Ramshorn Theatre in Glasgow during the COP26 Energy Day on the 4th of November.

Each Supergen hub – Solar, Offshore Renewable Energy, Bioenergy, Energy Networks, Energy Storage, Hydrogen and Fuel Cell – nominated up to two academics and early-career researchers to make up the surrounding audience and contribute to the discussion with specialist knowledge. I am glad that I was among them and had the opportunity to join the event in person.

In the next paragraphs, I will describe the concept of a fishbowl discussion, summarize the discussion points of the Supergen COP26 Fishbowl event, and provide an overview of my experience in Glasgow during the COP26 Energy Day

Laiz Souto is  a Research Associate on the Supergen Energy Networks Hub, with a PhD in

Electrical Engineering and  is also a Postdoctoral Research Associate in Future Energy Networks at the University of  Bristol with the Department of Electrical and Electronic Engineering.

What is a fishbowl discussion?

The Supergen COP26 Fishbowl event followed this format with six inner chairs and roughly twenty outer chairs. The inner chairs were occupied by the facilitator and the academics nominated by each of the five Supergen hubs at the start of the live stream. Before the start of the event, participants agreed to leave an empty seat in the inner circle whenever possible so that different participants could join the ongoing discussion. As an outcome, participants from different backgrounds, organizations, and career stages could share their thoughts on distinct aspects involved in the energy transition towards a net-zero carbon emissions future.

What was discussed in the Supergen COP26 Fishbowl event?

The Supergen COP26 Fishbowl agenda was divided into four chapters over one hour and a half. The event facilitator moderated the discussion, ensuring that the duration of each chapter was roughly the same and that all participants who joined the inner circle could share their ideas.

At the start of the live stream, academics delivered a short presentation about the perspective of their hub to contextualize the debate. The role of the research conducted by each Supergen hub towards a net-zero carbon emissions future was briefly introduced.

Chapter 1: “How do we generate our energy in a net zero world”

The role of different energy sources in a net-zero carbon emissions future was discussed. Energy production from renewable sources, energy storage, nuclear power plants, hydrogen, integrated electricity-gas-heating networks, and the phasing-out of fossil fuels were debated. Other aspects were also linked to the energy production in a net zero world, such as the importance of a just energy transition leaving nobody behind to achieve the climate targets previously set in the Paris Agreement.

Chapter 2: “How do we deliver that net zero energy to the public”

The role of different technologies in the energy supply chain was discussed. Among them, smart grid capabilities, artificial intelligence, flexibility options, and distributed energy resources were associated to disruptive changes in the provision of energy to the customers in a net-zero carbon emissions future. In this context, the role of energy networks in the transportation of energy in its different forms from generation sites to consumption sites was emphasized. Challenges and opportunities posed by the increasing electrification of other sectors were also discussed.

Chapter 3: “How do we utilize that net zero energy”

Changes in energy consumption in a net-zero world were debated, highlighting the role of the customers towards net-zero carbon emissions. The impact of the choices made by the customers on the final uses of energy was debated, considering aspects that could incentivize the adoption of clean energy technologies and energy efficient appliances, such as subsidization. Changes introduced by the increasing electrification of economies worldwide were also discussed.

Chapter 4: “What steps should the UK be taking to make our energy system net zero by 2050”

Policy decisions were discussed with a sense of urgency. Stopping subsidization of fossil fuels and increasing investments in state-of-the-art clean energy technologies along with the required network infrastructure were emphasized as key commitments towards a net-zero carbon emissions future. In this context, taking into consideration regional aspects along with clean energy technologies currently available was recommended to accelerate the energy transition towards net-zero carbon emissions.

What was like to be in Glasgow during the COP26 Energy Day? 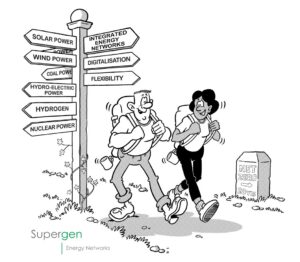 The city was overbooked and fully decorated with COP26 banners, some of which also including reminders of how individual choices contribute to greenhouse gas emissions in different ways. The atmosphere in Glasgow was tense, as the decisions to be made during the next few days of COP26 were expected to determine the world’s ability to curb global warming. Expectations among the COP26 attendees were high, given the importance and urgency of climate change mitigation and adaptation worldwide and the lack of ambitious commitments linked to action plans at the previous conferences. During the COP26 Energy Day and the Supergen COP26 Fishbowl event, I was happy to see and engage in interesting discussions about the role of energy networks in climate change adaptation and mitigation.

Now that COP26 is over and the Glasgow Climate Pact is ready, I hope to see governments implementing ambitious action plans that lead to rapid decarbonization worldwide. Ultimately, I look forward to seeing bold climate commitments put into practice towards net-zero carbon emissions in the next few years.