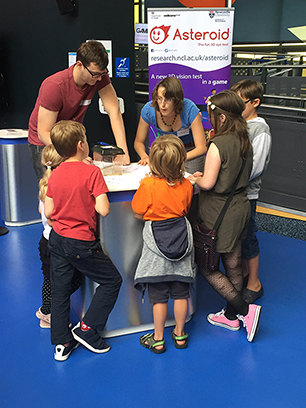 In August we were back at Centre for life again. This time with something different: workshops. With the Game On 2.0 exhibition, it was a perfect time for ASTEROID to run game design workshops. Since it was a very busy summer, I only started preparing the workshops the week before. Luckily Will, Maeve and Nikki were there to help me. So after a few brain storming sessions we came up with a rough structure of our workshops. 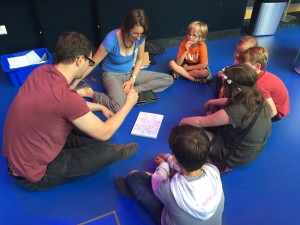 The details filled in while running the workshop in the museum, not one was the same. Gareth, our artist from Fluid Pixel, and I ran 3 workshops a day, all around lunch time. So, finishing my lunch before the next workshop started was my daily challenge. We brought an explorers box with us to the Centre for Life with objects related to games and 3D vision, including a living mantis (that was a hit :). From these objects, children had to guess the topic of the workshop. Soon, they came up with their own 3D games. I was glad to see my hints were clear enough. At this point it was time to get out the tablets and show them ASTEROID. As you can imagine, they were all very keen on playing it! Every time I asked for the tablets back, I would get a few disappointed looks. After the game playing, Gareth showed them some of the early sketches he made for ASTEROID, so children could see how the game evolved from ideas to drawings to game animations. From there on the workshop could take different routes. The overall idea was to give children the chance to come up with their own ideas for a game, with the current version of ASTEROID as a guide. Sometimes we even travelled through space to discover new planets for ASTEROID. 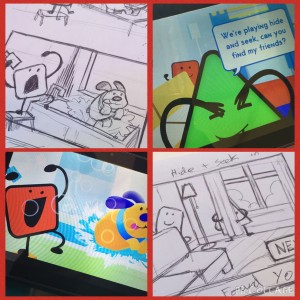 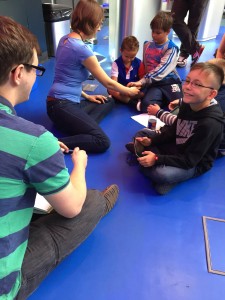 In other workshops, children designed an egg planet or a chicken planet. Also, we brainstormed about missions in a football world. Now and then the topic turned a slight different route with fighting, Vikings and deadly monsters. Fairies were also a rather popular theme. The children designed fairy houses,  fairy clothes and developed stories for our Fairy Forest level. A few workshops were football themed and we discussed different missions that a game player could complete on such a planet. Some of the ideas we came up with were finding footballs, collecting shirts (I saw some beautiful designs for that), gathering the players, looking for fans and, of course, a game should end with penalties.

We had lots of fun drawing. Some of the children were real artists, how beautiful they could draw. Others came up with the most original, and sometimes crazy, ideas (a “chicken cloud”, why not!). Towards the end of the workshop, Gareth would turn some of the children’s drawings into game animation sketches. The next step in game development: programming – this was of course not very feasible in a half an hour workshop, but the children went home with an insight on game design. And looking at their faces, they have had a great time with us 🙂 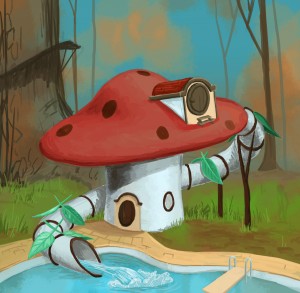