Today Sir Robert McAlpine (Builders) started closing the net on the Claremont Complex (Tower, Bridge and Daysh): all entrances/exits are gradually being closed for access, and the complex is now officially a building site.

The lifts are now unavailable (from 1700 today), and just in time we managed to move a pile of “stuff” from Bridge Floor 3 to the Sub-Basement refuge; this pile included the two back walls from the famous “Perspex Display Cabinets”, and three boxes of miscellaneous bits (now known as artefacts) which Adèle has fielded from the crowd leaving the Bridge next week, as NUIT move into Black Horse House. Kevin Dixon (Infrastructure Support Group) helped me move the great unwieldy back walls to the SB: our thanks to him, and we’ve noted him down as a strong lad, for future reference 🙂

Our storage space is now crammed out with moved items, and new items: my own task in the next few weeks (if I get into the SB), will be to tidy up and organise all these things, and hopefully retrieve some space.

On that topic, certain members of NUIT staff will have to be granted access (under very strict conditions) to the SB, and we are hoping that one or two others may be permitted on to that list (including me). There will now be a couple of weeks of uncertainty while handover is completed: the operation for Sir Robert McAlpine is very much complicated by having to allow access to non-employees through their site.

Below, you can see the tidying-up task now required in SB6… 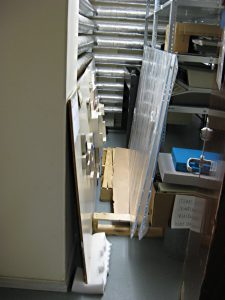 The back walls, crammed into SB6; they are facing another prize: the mural which was part of Claremont Tower Lobby for 40 years or more. 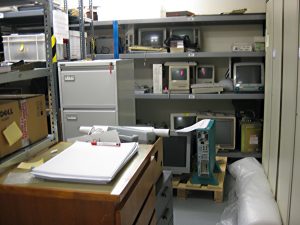 Here on the floor you see the Silicon Graphics workstation that Adèle received from ICAMB (Med School) two weeks ago. It weighs a ton (not quite). 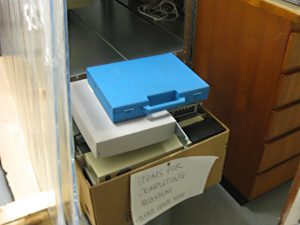 A box of “stuff” rescued from the WEEE recycling; includes tools used by networking engineers, as well as computing electronica. 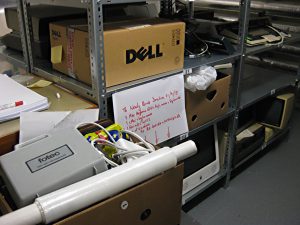 Foreground: another box, ditto. Background: two shelves-worth of “The Wendy Bond Donation”, which comprises an eMac, and a Macintosh Performa 600, with Stylewriter.