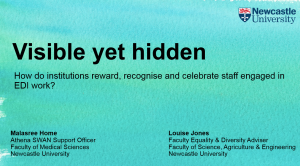 We all want to be recognised and rewarded for the work that we do, irrespective of the role that we are in.

I’ve been the Faculty’s Athena SWAN Officer for 18 months, and in that time, I’ve become interested in how staff who lead and manage EDI initiatives and projects are recognised, and the impact that this may ultimately have on the success of EDI projects (for example Charter Mark applications), the continuation of EDI teams, and the actual embedding of real cultural change within an organisation.

Scholarly research suggests that recognising, rewarding, and valuing staff can enhance productivity, yet rewarding EDI contributions are perhaps even more challenging than most in a Higher Education context. While, on the one hand, EDI roles demand certain niche skills and training, on the other hand, they often sit outside a specific job description, or are not aligned to promotion criteria. Nevertheless, they are crucial to delivering changes to culture, policies and practices that support any university’s ambition to provide inclusive environments for the benefits of staff and students.

Along with my colleague, Louise Jones (the E&D Advisor in the Faculty of Science, Agriculture and Engineering), I ran a workshop at this year’s Advance HE’s annual EDI Conference in Liverpool around reward and recognition for those in diversity roles – we called it ‘Visible yet Hidden’, hoping to capture some of problems that diversity professionals face. Organisations focus on the equality, diversity and inclusion (EDI) agenda and promote its importance, but anecdotal evidence suggests that they are less upfront and eager to recognise and value staff who are involved in supporting this agenda through their day-to-day roles and responsibilities, or by being involved in charter mark applications.

Before the conference, we tested the waters by running a snap survey using the mailing list for all those involved in Athena SWAN nationally, and ran the same survey for EDI leads at Newcastle University as well. The survey clearly struck a chord, and we were not prepared for the volume of responses – we received a total of 121 responses, most of whom were female (82%) and in professional support or administrative roles (60%). The results raised some interesting issues, which we presented at the workshop to a very engaged audience.

It was clear that organisations are broadening the remit of diversity roles – very few of the respondents had a specific ‘Athena SWAN’ tag attached to their role descriptors – however, the majority (74%) still retained standard organisational titles (HR Advisor/Project Manager/Lecturer/Senior Lecturer). This raises a lot of questions. To what extent is EDI perceived as an ‘add-on’ to existing roles? If they are not part of the original Job Description, are organisations ensuring that their staff have enough protected time to fulfil these roles? Organisations, especially universities, therefore do need to pay heed to resourcing for broadening the agenda.

The survey also revealed that the majority of EDI roles were junior or middle stage career positions (78%) with possibly very limited power to make changes through organisational decision making processes. Only 22% described themselves as having senior positions within the organisation. If these roles are meant to be the drivers for change, is this small percentage really enough to bring about real cultural change?

Recognition for these roles is linked to their career progression, and the respondents identified some major challenges here. While a large proportion of respondents (74%) felt that they had amassed a huge number of transferrable skills in their role, the majority felt that those were not recognised by current and potential employers, and 46% were unable to identify their next career move from their current role.

This was not helped by the fact that the majority of respondents (74%) had received no external or internal awards for doing their job well. Some organisations had awards for staff who contributed to EDI above and beyond their roles, but staff working in diversity roles did not appear eligible for these awards. A member of the audience asked a wonderful (and telling) question which made the penny drop for many in the room – “would you refrain from nominating someone for a ‘teaching’ or ‘best supervisor’ award just because they were in a teaching or supervisory role?”

However, this workshop was not all about doom and gloom, but about a way forward. And in true testament to the skills that all diversity professionals pick up, Louise gave a wonderful overview about what organisations and individuals could do to address this scenario, energising the audience again!

We hope that ultimately, strategic organisations in Higher Education, like Advance HE, will pick up the baton and become a platform where professionals working in diversity roles can connect with mentors in other organisations to improve career progression opportunities, ensuring that this research has long-lasting and meaningful impact. 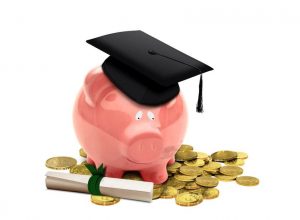 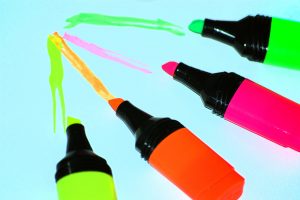 As part of our blog series highlighting projects within the University which have been supported by the Equality, Diversity and Inclusion Fund (EDIF), I spoke to Dr Ann Fitchett, who came up with the idea of Sweetening the Message. 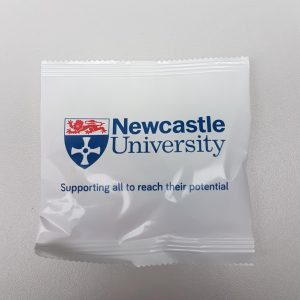 Sweetening the Message aims to raise awareness of Equality, Diversity and Inclusion, across our Faculty and the wider University. Packets of jellybeans displaying the message “supporting all to reach their potential”, have been distributed throughout the University.

Thanks to the EDI Fund, Sweetening the Message received £5000 to buy 5,000 packets of jellybeans!

The idea came from Stonewall, when Newcastle signed up as a Stonewall Global Champion back in 2016. When representatives from Stonewall came to Newcastle, they handed out packets of sweets with a message about their work attached, to raise awareness about what they were doing.

Dr Ann Fitchett, who is responsible for the Faculty’s engagement and outreach, alongside Dr Tom Smulders, the Chair of the Equality and Diversity Committee of the Institute of Neuroscience, embraced Stonewall’s sweet idea. 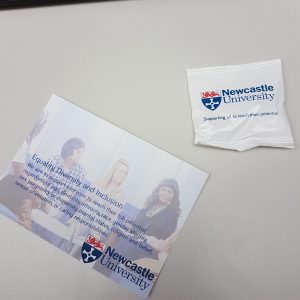 Sweetening the Message will help spread the message of support, and the ambition both FMS and Newcastle University have to support all students and staff in reaching their full potential.

Keep an eye out for students handing out jellybeans around the Faculty and campus soon!

If you’re a student or a member of staff at Newcastle University and you think you’ve got a great idea for a project to promote engagement with the EDI agenda at the University, click here to find out more about EDIF, or email us at FMS.Diversity@ncl.ac.uk Funding closes on the 23rd November, so hurry up!

As part of our blog series focusing on projects funded by the Equality, Diversity and Inclusion Fund (EDIF), I spoke to Dr Laura Delgaty about the project she got funding for: Creating an Equality and Diversity Calendar.

The aim of the calendar is to help keep staff and students up to date and informed about any upcoming EDI events they may wish to attend or participate in. It has been made easily accessible through the University Intranet (it can be found here). 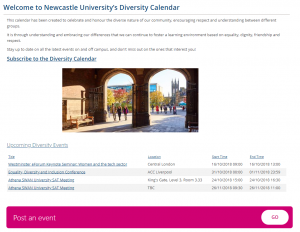 The project received £1,500 from the EDIF, to cover costs such as a focus group, to determine what people wanted from the calendar, and IT support, to have the calendar professionally developed. They also employ an intern, who is responsible for ensuring relevant events are added to the calendar across the year.

Laura hopes that the calendar will “promote and celebrate equality and diversity in the region”, and encourage staff and students across the University to engage more widely with EDI issues.

Or, if you’re a student or a member of staff at Newcastle University and you think you’ve got a great idea for a project to promote engagement with the EDI agenda at the University, click here to find out more about EDIF, or email us at FMS.Diversity@ncl.ac.uk