As a research group a small number of us have been involved in the ITRC project over the past five years, namely Stuart Barr and Dave Alderson. Craig Robson joined the ITRC ranks in January, pausing his PhD work to help complete the final phase of the research required by autumn 2015. ITRC (Infrastructure Transitions Research Consortium) has been investigating the future of the UK’s national scale infrastructure with regards to how it must develop to meet ever changing demands and how climate change amoungst other factors will affect the resilience of those networks we rely on.

Our role in the project has centered around the development of the tools which would allow the five year project to be completed and included, but was not limited to, the development of the central database for all data for the project, and the support tools which would enable the analysis to be undertaken and results reported. It is on this later point where most of the past 6 months have been spent; developing a reporting tool for the presentation of the results from the long-term infrastructure planning aspect of the project.

The developed reporting tool allows users to view results from the each infrastructure sector (e.g. transport or waster supply), or view cross sector results, a set of similar metrics computed for each sector allowing for direct comparisons between them on there performance. For each sector a range of model outputs can be viewed from the level of emissions produced, to the running costs per year to the cumulative capital investment required. Results are shown not only at the regional level, but where possible at the sub-national level through the government office regions for example where the models output data at this granularity. This allows the tool to show data not just in charts, but also through maps, allowing new insights to be learned which may not be identified through non-spatial results. More detail on the tool, along with images and the like will be provided in a specific post at a later date, but for now a small selection of images below exemplify the tool. 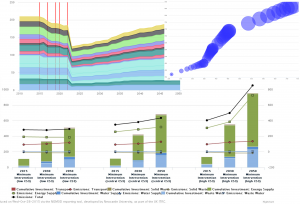 With the end of the project looming near an event was organised at the ICE in London on the 15th October where the key results and impacts from the project could be disseminated to a wider audience with those key members behind the research all being present to answer questions and discuss their work. At the event we were available to demo the reporting tool and discuss the complexities behind the database for those interested, while a set of slides were used to give a overview of our work. More generally two videos (below) were produced giving an overview of the project and the one on the resilience of the UK’s national infrastructure.

Currently a researcher working on the ITRC-MISTRAL project for the first national scale system-of-systems analysis framework, where my work focus on the database and visualisation aspects of this work. Completed a PhD in infrastructure robustness to cascading and spatial failures. View all posts by Craig