The Geospatial Engineering research group and the recently established Spatial Analytics and Modelling lab (SAM) at Newcastle, along with the Geospatial Institute at Nottingham University, have been awarded a prestigious EPSRC Centre for Doctoral Training in Geospatial Systems. The CDT will train a national cohort of over 50 interdisciplinary geospatial engineers, scientists and practitioners that will help deliver the collective benefit of geospatial data and technology to the UK. The CDT is a unique opportunity for academia to work with the geospatial industry and wider applied user base to ensure that the UK prospers in a global geospatial market experiencing rapid growth, and to address major global societal issues, such as climate change impacts, urban sustainability, spatially resourcing public health, and removing spatial barriers to social inclusion and healthy aging. The CDT will provide specialised training in geospatial technology, data management, analytics, simulation and visualisation, and also develop student’s skills in the advanced computing technologies and AI approaches that are transforming the use of geospatial data; knowledge and skills that will underpin their 3-year interdisciplinary PhD-project. The world leading interdisciplinary geospatial research and expertise established by Nottingham’s Geospatial Institute and Newcastle’s Geospatial Engineering group and the £2.25million investment in the Spatial Analytics and Modelling lab (SAM) at Newcastle with the aim to foster interdisciplinary geospatial research between engineers, social scientists, computer scientists, mathematicians and statisticians and the medical sciences were key to the success of the award of the CDT.

In what is the week of #gisday we can now announce that that registration for GISRUK 2019 is now open – see our website for prices and a link to register! (Prices start from £150). And we have announcements lined up for later in the week too!

Alongside registration we have also opened up the application process for our early career scholarships which we are offering to eligible candidates. To be qualify you must be a lead author on a submission, be a student (masters or PhD) or an early career researcher (with less than 3 years experience). For more details, and to apply, see our website.

If you missed our call for papers, announced on the 9th October, there is still plenty time to get your submissions in with the deadline being the 18th January. We have already had a few submissions, so if you want more information, there is details about this years call on our website. (We also have a flyer if you want to help spread the word A5 or A4).

More details about our keynotes will be announced very shortly – the first hopefully this week! 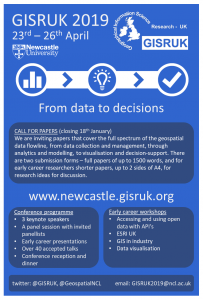 Last week we hosted the DREAM CDT (Centre for Doctoral Training in Data, Risk And Environmental Analytical Methods) Challenge Week – an event each year, which brings together the students from across the four member universities to address a set challenge based around the themes of the CDT – big data and environmental risk. This year the students were asked to ‘design and undertake an agile prototype development of a real-time spatial hazard decision support tool for Newcastle-Upon-Tyne’. Data from both the Urban Observatory and the NISMOD-DB++ (National Infrastructure Simulation and Modelling Database) was made available, as well as technical advice from staff in both teams (all part of the Geospatial Group) on accessing and using the data through their API’s.

Three groups, containing a mixture of students at various stages of their PhDs, and from across the four universities, were set the challenge at lunch time on Monday, before presenting their work on the Friday morning. In between, they spent their time assessing the quality of data (and the API’s!), developing tools and models, and listening to a host of speakers – including Chris Jones from Northumbrian Water (Research and Development Manager) to staff from Newcastle University like Professors Chris Kilsby and Richard Dawson, experts in natural hazards. All groups produced some quality outputs while learning new skills along the way and becoming familar with new datasets. A summary of the work by the groups:

Group 1 – Investigated how real-time temperature data from the Urban Observatory, combined with historical data, could be used to alert emergency responders/decision makers/residents/family members of those locations where action was required when extreme temperature events appeared to be occurring. By using household characteristics data from the NISMOD-DB++ database, those communities which might be more vulnerable could be identified improving the effectiveness of the system.

Group 2 – Using real-time air pollution data from the Urban Observatory and Ordnance Survey road network data from NISMOD-DB++, the group designed and demonstrated an app which allows users to identify a route between destinations based on the exposure to air pollution and/or time. Ordnance Survey building heights data was also used, again via NISMOD-DB++, to improve the estimates of pollution levels on streets where no sensor data was available.

Group 3 – Like group 2, an app was developed to allow users to identify the least polluted routes between two locations, though this was focused on school children and had an educational element too. A user friendly interface was designed with the aim of encouraging children to learn about the harmful effects of pollution, and help identify routes from their homes to school that can help reduce their exposure risk. Again this used real-time data from the Urban Observatory as well as Ordnance Survey building and network data through NISMOD-DB++.

As ever, such events also involve a team bounding exercise, and on this occasion, this was a meal out in Newcastle at the Blackfriars restaurant on the Wednesday evening. With Newcastle being known as a bit of a party city, I will let you decide if the night stopped there on went on a little later into the night….

Thanks to all the students who came along and actively enagaged embracing the set challange, to all presenters for giving up thier time, and to all staff from across the four universities who attended, all of which made the event a success!

For those who were not present at GISRUK 2018 this year in Leicester we are delighted to announce that we are hosting GISRUK (GIS Research UK) in April 2019! And for those that were at Leicester, what follows is a reminder about some of the key details.

The conference will be between 23 – 26th April, and will be hosted in the new Urban Sciences Building, one of the most (if not the most) sensored buildings in the UK. The conference theme has already been decided, and will be ‘From Data to Decisions’. More details about this, the programme, abstract submission process and registration will be announced in September.

We have also been busy organising the social events, from the conference reception to the conference dinner, and again we will announce more details about these soon.

We look forward to hopefully seeing many of you hear next year!

Last week myself and a group of us attended the Northumbrian Water Group (NWG) Innovation Festival (#InnovationFestival18), intended to bring people from different areas together to think about and tackle challenges within the water industry (with a focus on NWG). More intriguingly Newcastle University had sponsored one of the 12 sprints, a sprint running all day for the full five days with the idea of developing concepts to solve a problem, with this in particular sprint focused on digital twins (#DigitalTwins). Other sprints included how utilities could better work together to map underground assets and one focused on how can we create a happier and more productive workforce. This was not a small event, with over 2000 people attending and over 500 business involved. In true festival style, the week began with a compulsary participation in a sing-along to ‘The greatest showman’…..

Great ideas were bounded around, with people involved ranging from those in management positions in NWG, to researchers like myself all who had varied skills and interests, to NWG customers themselves! Ultimately in the Digital Twin sprint where we were most involved, great ideas were devised as to how these could help NWG, from devising a single database system as ‘a single source of truth’ to developing a digital twin for incidents such as bursts as well as one for the whole company for modelling the communication and data flows through personnel. I’m sure across the other 11 sprints more great ideas were involved, with NWG now left with the not so small job of deciding which of these to follow up on!

Thanks to all the effort of the organisers!

Ps. If you are wondering what the greatest showman is – https://www.youtube.com/watch?v=NyVYXRD1Ans

We are now looking for applications for our available fully funded PhD studentships with the DREAM CDT (Centre for Doctoral Training). DREAM, Data, Risk and Environmental Analytical Methods, is a partnership between four leading universities based within the UK, Cranfield, Newcastle, Cambridge and Birmingham, and is now into its 3rd year. The CDT focuses on the use of big data to solve environmental risks, with topics covering a wide field of research. All PhD students have a wealth of training opportunities available to them as well as regular networking opportunities with those based at the other partner universities.

More information on these PhD’s are available on the DREAM website, where you can also find more details on the CDT and how to apply.

A flyer is also available.

We have funding available for a number of PhD’s in the area of big data, risk and environmental analysis, with a start date no later than March 2017. The funding is available through the DREAM CDT (http://www.dream-cdt.ac.uk/), offering students access to world leading research teams and a large selection of training and development opportunities. This funding comes with the freedom to devise your very own reaserch project with the aid of experts from a range of fields who will help guide and support you from the developemnt of the project to the completion of the PhD.

For more information on taking up a PhD with the DREAM CDT, please contact Stuart Barr (stuart.barr@ncl.ac.uk).

Four new professorial appointments are now being advertised at Newcastle University on the theme of Spatial Analytics and Modelling (SAM). These fall across four areas:

Applications for these appointment close on the 28th November.

A new job opportunity has arisen for a researcher (assistant/associate) for a 24month position working within our group. The position is tied to the recently awarded multi-million pound ITRC MISTRAL programme grant, a joint project between seven UK based universities, investigating the future of national infrastructure. The appointed person will work on the development of a building classification model for the entire UK, working primarily with Ordnance Survey data. In collaboration with other MISTRAL researchers demographic and economic profiles will then be assigned to buildings providing data to be employed across infrastructure models developed across the consortium.

We are pleased to announce that we have a new four year fully funded PhD studentship available in spatial data modelling with BIM/GIS. Proposed to start in September 2016, the PhD will aim to develop tools for modelling and understanding flows across a city; from the broad city-scale to within individual buildings. Funded by EPSRC, the PhD is a partnership between ourselves at Newcastle University (the Geomaticts group in the School of Civil Engineering and Geosciences) and Ordnance Survey, and affiliated with the EPSRC funded ITRC-MISTRAL programme.

For more details on the PhD including how to apply, please see here.