Dr Rachel Gaulton, School of Civil Engineering and Geosciences, with colleagues from Salford University (Professor Mark Danson, lead organiser), University of Massachusetts Boston, and University College London, has won support from the Royal Society to hold a Theo Murphy International Scientific Meeting at The Society’s Chicheley Hall. The meeting will bring together key researchers from around the world to discuss “The terrestrial laser scanning revolution in forest ecology” and amongst the sixteen invited speakers are researchers from Australia, United States, Finland, Netherlands and the UK. The meeting will lead to a special themed issue of the Royal Society’s inter-disciplinary journal Interface Focus. 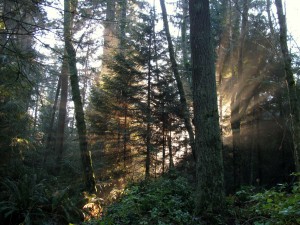 Terrestrial laser scanners, or TLS for short, provide detailed three-dimensional measurements of forests with unprecedented accuracy, by firing millions of laser pulses up into the canopy. These measurements are set to revolutionize the way in which ecologists measure forests, allowing changes over time to be characterised, and will help scientists to understand the role of forests globally in carbon storage and to monitor the impacts of climate change.  Newcastle University Geomatics Research Group has a long track-record of research at the forefront of TLS processing and application, including recent NERC-funded work on dual-wavelength laser scanning for forest health monitoring and the meeting will provide a key showcase for this work, whilst helping set the wider agenda for the future of the field. The meeting will take place on the 27-28th February 2017 with the programme released soon. 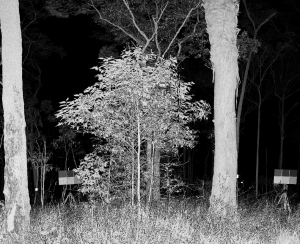 Geospatial Engineering researchers recently took a trip ‘Down Under’ to participate in a unique terrestrial laser scanning inter-comparison exercise. Dr Rachel Gaulton and Dr Steve Hancock joined almost 30 leading researchers from the UK, Australia and the U.S. at field sites near Brisbane in early August to evaluate and compare how five different laser scanners and a range of other measurement approaches can help to measure and monitor forest canopy structure. These scanners included the Salford Advanced Laser Canopy Analyser (or SALCA) , the subject of on-going NERC-funded research at Newcastle, in collaboration with University of Salford and UCL, examining the potential of dual-wavelength laser scanning for assessing forest canopy health.

The exercise, organised by John Armston and colleagues at DSITIA Queensland and CSIRO, was an activity of the Terrestrial Laser Scanning International Interest Group (TLSIIG), a recently formed network of scientists with an interest in forest laser scanning. Alongside SALCA, measurements of three field plots were made with the World’s only other dual-wavelength TLS, DWEL (developed by Prof. Alan Strahler at Boston University with collaborators at CSIRO, UMass Boston and UMass Lowell), the low-cost Canopy Biomass Lidars (named Candi and Bruno and developed by UMass Boston and RIT) and two commercial systems. Photogrammetric techniques also played a part with co-incident measurements made with the AusPlots ‘Photopoint’ method, a system designed to obtain 3D forest structure information from photo panoramas. A report on the exercise featured on Australian TV News .

Alongside the high-tech methods, leaf samples from the tree canopies were needed to allow measurement of spectral properties and to test the ability of dual-wavelength data to distinguish leaves and bark – a key factor in producing accurate estimates of canopy structure. Steve joined the destructive sampling team in using a ‘line thrower’ (or big slingshot) to collect the samples and undertook additional sampling to estimate the true leaf area index of a section of heavily laser scanned tree canopy.  Work is now on-going to calibrate and compare the data sets, with early results presented by TLSIIG members (John Armston, Crystal Schaaf and Alan Strahler) at the Silvilaser 2013 conference in Beijing.

The work in Brisbane followed a month-long field experiment with the SALCA instrument at the University’s Cockle Park Farm.  The experiment, part of a NERC-funded research project examining the potential of dual-wavelength laser scanning in forest health monitoring, was focussed on testing the sensitivity of the instrument to changes in canopy water content – an indicator of drought or disease. The canopy-scale experiment at Cockle Park involved subjecting 22 trees to drought stress, whilst making extensive physiological, spectral and laser scanner measurements and preliminary results have recently been presented by Rachel at the RSPSoc 2013 Annual Conference in Glasgow and the 9th EARSeL Forest Fire Special Interest Group Workshop held in Warwickshire.

More information about the SALCA instrument and on-going research can be found in the SALCA Diaries.

Many thanks are due to John Armston and colleagues for their hard work organising the Brisbane field work. Steve Hancock’s travel to the inter-comparison exercise was funded by a small grant from the Douglas Bomford Trust.