Did you know that 2015-16 is International Map Year?  Newcastle University has representation on the working group promoting this UN-endorsed project. See http://mapyear.org/about-international-map-year/ for details about the world-wide nature of this set of events and awareness raising.

One IMY-badged event which took place in June 2016 in Newcastle, at the renowned Literary and Philosophical Society on Westgate Road (http://www.litandphil.org.uk/) was an exhibition by Karen Rann, tracing the history of the contour line.  There is some merit to the claim that Geordie mathematician and surveyor James Hutton was the first to apply contour lines to assist in the mapping of terrain.  The task of measuring the Scottish mountain of Schiehallion was a scientific project of immense significance and, as Karen describes in her extensive blog (https://thegreatlinesproject.wordpress.com/), Hutton was charged with producing the equivalent of a surface model for the geophysicists to work with.  Karen’s blog relates her story of a dedicated search for the origin of the contour line, and her exhibition reflected that.

Cartographic methods of displaying terrain data have some synergy with the creative endeavour shown in Karen Rann’s work.  David Fairbairn’s contribution reproduced below considered some of the more traditional characteristics of contour mapping, as undertaken by geomaticians – but with an artistic output:

As is evident from Karen Rann’s Great Lines project, a pattern of contour lines can be used to quantitatively model a rigorous framework for terrain, but can also be applied more impressionistically to convey a sense of the shape and variations of the earth’s surface.

Other characteristics of lines, such as form (dashed lines, continuous lines) and thickness, can be used to modify the appearance of the contour pattern.  An effective combination, varying colour/shade and thickness, is that proposed by Japanese cartographer Kitiro Tanaka in the 1950s.  Sometimes called ‘illuminated contours’, this method of rendering the contour lines shows them lighter if they are on a terrain slope facing towards the north-west, and darker on slopes facing south-east.  In addition, the lines are made slightly thicker if they face directly north-west or south-east, and thinner otherwise.  The example below shows this method applied to the contours of Schiehallion: the result is a pseudo-three-dimensional portrayal of the terrain surface, helping with the interpretation of the contour pattern: 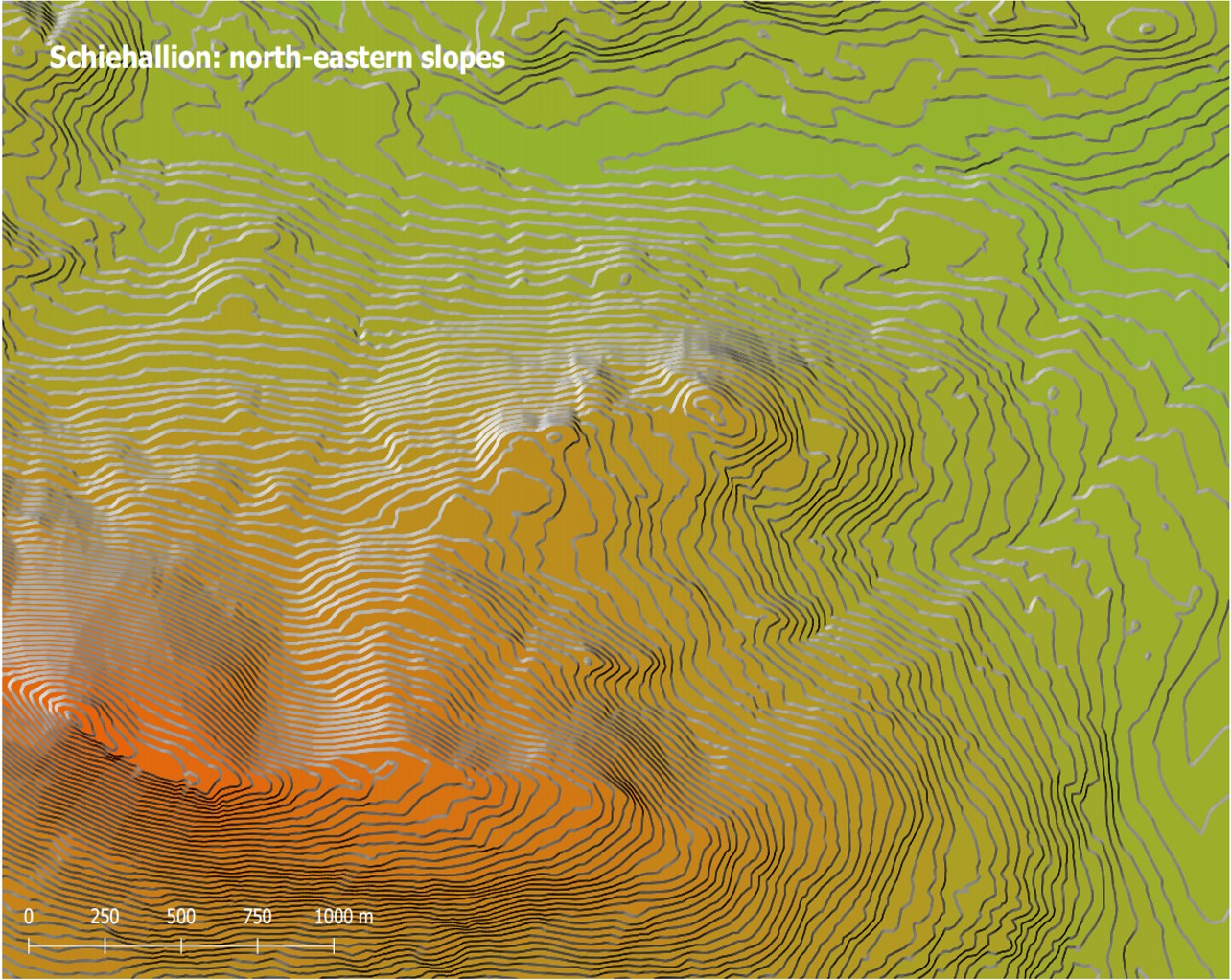