After many months of speculation and concern, the details of the Spending Review 2015 when it comes to science feels, at first, as a massive relief. After all, the Chancellor announced that science funding would be protected in real terms this time, “raised to £4.7bn by 2020 and capital spending to remain at 6.9£bn over this period”. We should be celebrating, surely! However, a detailed analysis shows that this really means that public investment in science will be frozen for the next 5 years. In fact, according to a detailed analysis (source: Scienceogram.org): 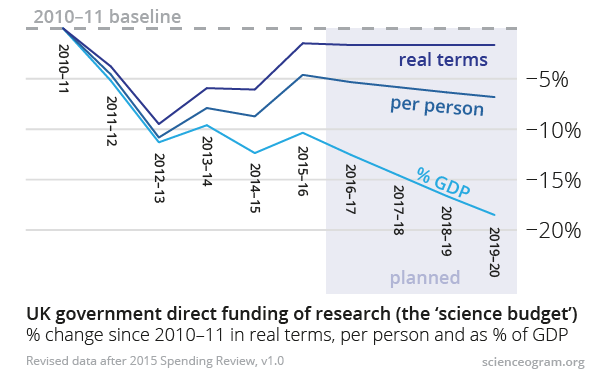 And we also need to look at the details, not just the main headlines. The science resource budget (those £4.7bn) will now include a newly announced Global Challenges Fund “to ensure UK science takes the lead in addressing the problems faced by developing countries whilst developing our ability to deliver cutting-edge research.” Depending on how this fund will be managed and organised, there is a concern that this could mean that some of the funds which are currently part of the Science Budget will be diverted to sustain the Governments commitment to spend 0.7% of GDP on international development.

It is also still not clear how the implementation of the Nurse Review in to how Science is funded in the UK will undoubtedly affect the funding landscape. Setting up an overarching structure will have its costs and we need to see how that will translate into funding allocation.

But most importantly, this flat cash real-terms freeze is yet another failed opportunity to increase investment in research and development that is required to maintain the UK’s leading role and sustain economic growth. Five years of flat cash has already had a detrimental effect on R&D, not only in terms of the decline in available funds but also in reputation and work of labs across the country. With the positive economic signs announced by the Chancellor, the Government had a chance to reverse the current managed decline of R&D in the UK but decided to continue on a similar path. The long term effects of these decisions will only be clear over the next few decades – but that is why many, including the Wellcome Trust and RCUK, reacted with caution at the real-term freeze announcement.

The lead up to the Spending Review 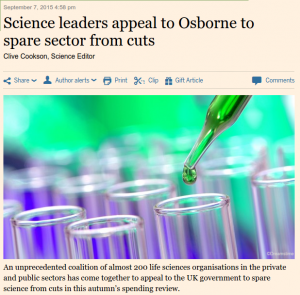 Lettter in FT calling on the Chancellor not to cut science funding (Sept 7, 2015)

With rumours of 20 to 40% cuts being “leaked” throughout the summer and even a rushed review from a private consulting company looking on how to make cost savings across the Department for Business, Innovation & Skills (BIS), the scientific community had reasons to be concerned. Many voices spoke publicly against the axe falling on public science funding: a letter from many charities and learned societies, together with several companies was published in the Financial Times, UK top scientists sharing their views on Buzzfeed and several opinion pieces in the media from leading scientists and journalists urged the Government to not impose any cuts and seriously consider increasing current investment in order to support future growth. Behind the scenes, influential learned societies and campaign groups lobbied the Chancellor, the new Minister for Universities and Science, Jo Johnson, and the new Secretary for BIS, Sajid Javid to stress the same points. And the House of Commons Science & Technology Committee made detailed recommendations that the science budget should be increased, just a few weeks before the Spending Review announcement. 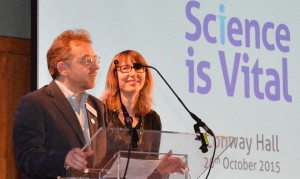 But it wasn’t just prominent voices. As in 2010, Science is Vital organised a grass roots campaign to get the voice of scientific community and all supporters of science be heard. There was a big science event in London with scientists, patient groups, journalists and entertainers all rallying to support sustained public investment in science. Across the UK, local events raised the same issues within local communities, getting people to joint watch the event in London but also discuss how science is important to them. And nearly 2000 people wrote a postcard to George Osborne, telling him why they thought Science is Vital.

The fact that the Science Minister has now used the phrase “Science is Vital” publicly in at least two occasions, including in his reaction to the SR2015 on social media, means that this important message is getting across our politicians and key decision makers. As more  details of the Spending Review are announced in the coming days and weeks, we will surely have opportunities to continue to let them know why Science is Vital.

What do you think? You can leave your comments below.
Science is Vital is also asking for your reactions.