The idea of our counter-collusion contracts is to make collusion a bad choice and leads to loss, so that the clouds will avoid it like a plague. Collusion has been studied for many years by economists, and they have made several key observations:

Collusion is delicate and requires trust among the colluding parties. If we can take away the trust, the clouds cannot collude. 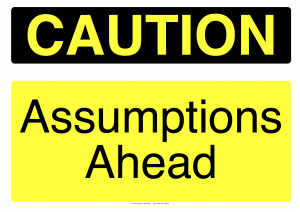 Everything I say below is based on certain assumptions. The most important ones include:

There are other less important assumptions, check them in the paper.

Prisoner’s Contract is where we started. The contract is designed for outsourcing and needs to be signed by a client and two clouds. Informally, the contract requires each cloud to pay a deposit before it can take the job. The deposit, of course, needs to be large enough (which we have derived a lower bound in our paper). Then the clouds get the task to compute, and each returns a result before the deadline. An honest cloud will be paid a “salary” for the computation, a cheating cloud (if caught) will be punished by losing its deposit, and if one cheats one is honest, the honest cloud will get an additional reward (from cheater’s deposit). In cases where the client cannot decide who is honest, the trusted party will be called to resolve the dispute. The cost of dispute resolution will always be born by the cheating cloud(s), from the deposit(s). This means for the client, its cost is bounded and will never be more than the two salaries, even in the unlikely case that the trusted party has to be involved.

What is the consequence of the contract? The highest payoff each cloud can get comes from the case where it is honest and the other cheat. What does that mean? Let us play the role of clouds, you and me:

What would you do?

If your choice is A, you are a good person. And your honest behaviour will force me to behave honestly because I will be punished if I cheat and you do not cooperate.

If your choice is B, you are too naive. Of course collusion, if it succeeds, will lead to a higher profit (than being honest) for you . But have you ever considered the possibility that I am lying? I can take advantage of your trust, and later send the correct result to get a higher profit.

If your choice is C, you are a smart badass, with a sense of “business acumen”. This is actually a choice that is no worse than A and could lead to the best payoff for you in the game (if I am naive or mad).

If your choice is D (I hope not), you are dangerous because this choice makes no sense (it is the worst thing you can ever do), and who chooses this must be out of his mind.

Anyway, you should get the idea and can understand the game presented below: 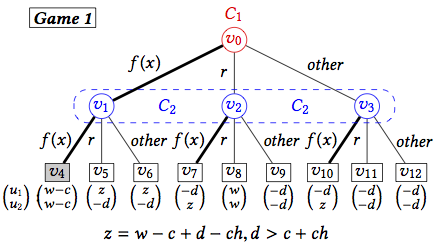 C1 and C2 are two clouds, the label on edges are the actions they can take: f(x) means to send the correct result, r means to send the agreed wrong result, other means any other actions. Below the leaf nodes are the payoffs: u1 is the payoff of C1, u2 is the payoff of C2. No need to pay attention to the payoffs now, you can find how they are derived in the paper. The bold edges show the best choices of the players (C1 and C2). A bold path from the root to a leaf node is an equilibrium, a stable state in which both parties do not want to change their strategies if the other does not.

If you are familiar with game theory, you should have noticed that this is somewhat a Prisoner’s Dilemma game. For both clouds, the reasoning is the same and both will stay honest. If both clouds stay honest, everyone is happy and dispute resolution is not needed.

So far so good and it seems that we have solved the problem. But unfortunately, no. In the next post, you will see how the clouds, using another contract to change the game completely and make collusion the best choice, and how we solve this problem.