Pybus had a wide ranging interest in cancer and published many cases and research papers in the medical journals concerning all aspects of his research. What comes through in his papers is that his main research focus was on lung cancer and carcinogens found in the air pollution, particularly benzopyrene in soot from burning materials and diesel fumes. Pybus did discuss lung cancer and tobacco smoking but felt that air pollution should be considered a bigger threat. He primarily used statistical evidence and cases he had seen to understand lung cancer and its association with air pollution.  He worked in his own research institute for 30 years and retired from active research in 1955; going on to campaign for cleaner air in the UK due to his findings. 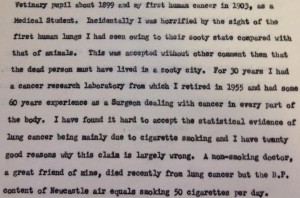 Pybus’ interest in cancer first began as a schoolboy, but became fully realised when he saw his first tumour as a veterinary pupil in about 1899. He saw a human cancer for the first time in 1903 after deciding to switch from veterinary school to medical school. He made this decision due to his distaste of the treatment of animals; such as lack of anaesthetic while surgery was performed. Pybus worked primarily as a surgeon, but in 1925 was able to set up his own Cancer Research Institute.

During this time Pybus was supported by the Imperial Cancer Research Fund, this fund was set up in 1902 and was aimed at finding new approaches to cancer and its treatment. In the 1920’s a new funding party was set up, namely the British Empire Cancer Campaign who also went on to fund Pybus’ Newcastle based Research Institute.

During his active research period Pybus used similar techniques to other researchers, including a “Tar-Painting” method which was first used in 1915 by Katsusaburo Yamagiwa and Koichi Ichikawa at Tokyo University to induce cancer in animals – the tar acted as a carcinogen. Using this method in 1924 Pybus produced neoplasms in mice. 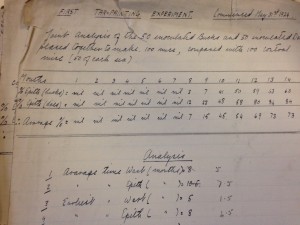 Not only did Pybus explore various carcinogens he also researched and published an article in the British Medical Journal on hereditary bone tumours in mice. This follows a strong research theme within oncology which, since the discovery of DNA, has led to the ability to actively pinpoint inherited defective genes which can lead to cancer, such as a mutated BRCA1 and BRCA2 gene which link to breast cancer. 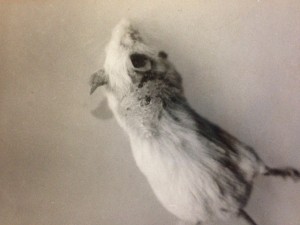